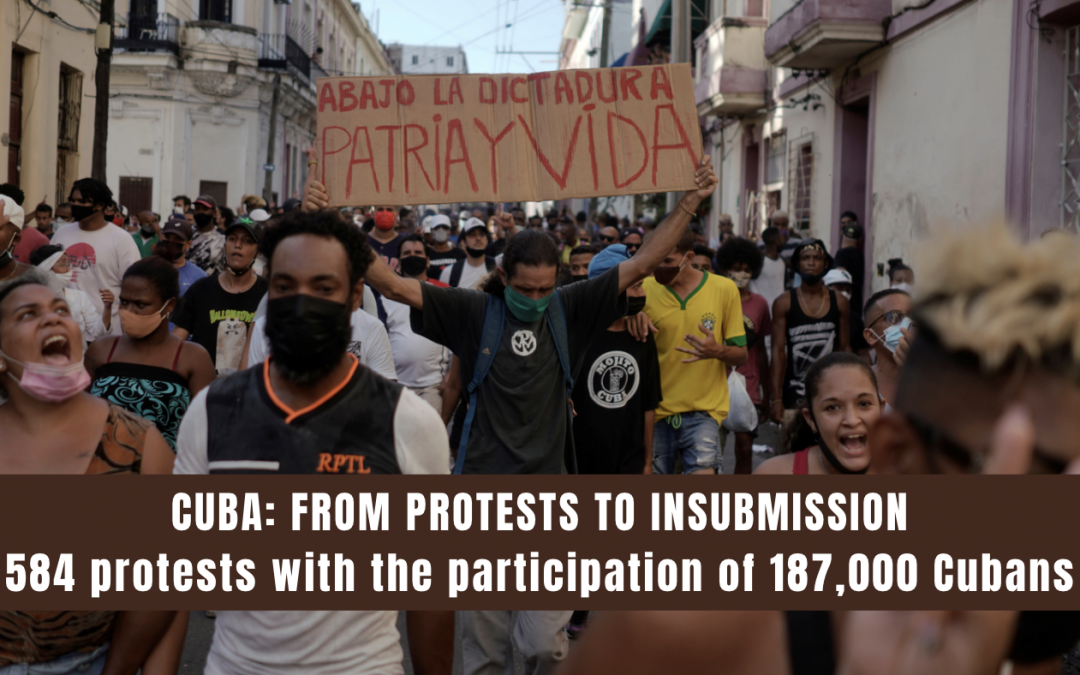 In July, above 187,000 Cubans of all ages, races, professions, cultural levels, and genders participated in multiple protests throughout the island. The alleged “marginal elements” involved plus those who expressed their support for them are a perfect sample of Cuban society.

The Cuban Conflict Observatory (OCC) reported 584 protests in the July “conflictometer,” although the most recognized worldwide were the demonstrations that took place on July 11 and 12 along 49 provincial capitals and towns throughout the island. These demonstrations had an openly anti-government and anti-system character, with the people chanting slogans such as Freedom! Down with the Dictatorship! and Homeland and Life!

The most significant feature is not the increase in the number of protests, but their massive participation. A simple comparison shows that last June 1,600 Cubans participated in protests, most of them individual. The increase in participants for the month of July (187,000) means an upsurge by 11.687%.

The truth is that in the July 11 and 12 protests, no slogans were heard against the US “blockade.” The report highlights that Cuban citizens have become aware that it is not possible to transform the socioeconomic reality without a change in the political system, which they blame for exercising an internal blockade against national prosperity.

The regime’s response has been to implant terror. The population, unarmed, is being attacked by official forces and paramilitaries armed by the State. That is a crime against humanity, not a civil war. “This is a war against all the people,” states the report. For that reason, the Cuban Conflict Observatory calls for an immediate moratorium on international sales of all police equipment to Cuba.

The report points out that despite the brutal repression, “insubmission has not been crushed or extinguished because the government refuses to recognize the roots of the crisis and does not respond sufficiently to the demands of the population.”

On the other hand, the fierce repressive response to the peaceful protests in July meant a definitive burial to the symbolic capital accumulated by the revolutionary myth. Even unconditional friends of Cuba’s regime, from Bernie Sanders, to the Communist Party of Chile, Joseph Borrell or the signatories of the paid ad in the New York Times against the embargo, have had no choice but to hold their noses and distance themselves from the brutality of the repression meted out against peaceful protesters.

The report highlights that the July protests transformed the nation. Cuba’s post-July 11 society is radically different. Citizens have learned that many of their neighbors think just like them and that the people have real power if they decide to use it.

Last-minute government concessions, all provisional until December – a reduction in communication rates, approval of direct importation by the private sector, tax-free customs for food and medicines, elimination of capped prices on some agricultural products – have only succeeded in convincing more people that the way to get what they demand is not through a dialogue that officials have never accepted on these or other issues, but confrontation and public outcry. And something more dangerous for the government: they are convincing the population that any concession will always be temporary, unless they permanently get rid of the system that blocks their right to freedom and prosperity.