The immoral lie of Raul Castro 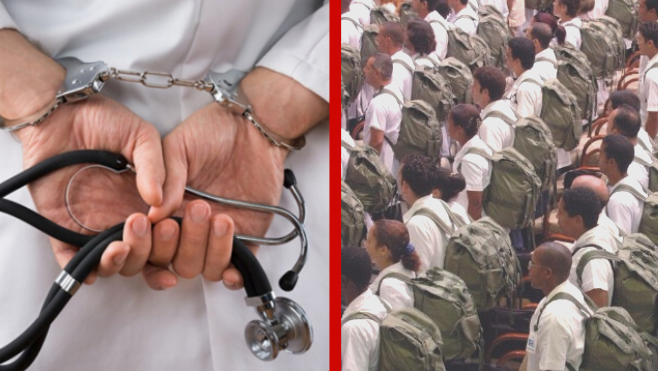 During his recent speech before the Eighth Congress of the Communist Party, Raúl Castro described as immoral what he called “a campaign against the international medical cooperation provided by Cuba.” He thus referred to the efforts to unmask the dark political and commercial interests behind this so-called cooperation that make it a modern form of slave labor.

Since Mr. Castro chose the adjective “immoral”, we could review the long list of immoralities increasingly revealed by the smeared makeup of the alleged medical power.

It is immoral to have doctors who go to work by bicycle or bus, who work with a chronic shortage of resources and work 32-to-36 hour shifts ─because they are denied the right to rest after 24-hour on-duty shifts─ earning the equivalent to 60 dollars a month, a salary that borders the international poverty line of $1.90 per day.

It is immoral to take advantage of that, and of their fear of political reprisals, so that these doctors and other health workers have no alternative ─to support their own and avoid being marked─ than to alienate themselves for years from their children, spouses, parents, and submit to a kind of maquiladora in which they are imposed conditions identified by the International Labor Organization as indicators of forced labor, including the dispossession of their wages ─ they are docked between 75 and 95 percent, depending on the country of destination─ retention of identity documents; isolation;  restrictions of  movement; intimidation and threats; abusive living and working conditions, and excessive overtime.

It is immoral to force these professionals to swear ─superseding the Hippocratic oath─ loyalty to the revolution, that is, to the upscale ruling caste; and force them to do political proselytism using as bait medicines sent from Cuba, where they are so scarce; in case they are not ordered to destroy the drugs so that the inventory matches the number of ghost patients ─because they also force them to report consultations they never gave in order to increase the bill that is passed on to the hosts.

It is immoral that this human trafficking operation brings you, the Castros, and your entourage, billions of dollars a year ─6.4 bn in 2018─ and then you swear that such income is used to sustain the public health system, in which medicines and supplies are overwhelmingly lacking, equipment is broken, family doctors are on mission and people die for lack of specialists and ambulances, while none of that is missing in hospitals for you, your family and your courtiers like CIMEQ, or in clinics set up to fatten your pockets, such as the Cira García and others of the so-called health tourism.

Immoral, as well as criminal, is to deprive the country of more than 3,700 doctors and specialists in the middle of the COVID-19 pandemic and sending them abroad to earn millions for you. We get you:  members of the Henry Reeve Brigades ─of which you have sent abroad more than 50 in less than a year─ are paid the most, considering the risks they face. But when the Ebola epidemic scourged West Africa, the World Health Organization paid $8,000 a day for each Cuban doctor, yet they only received $200 each.

Immoral, and criminal, was to maintain open borders while the Chinese virus devoured the world, alluring hundreds of infected tourists under the slogan “Cuba, a safe destination”. And so it is now altering the cause of death of the deceased and writing on the death certificate that it was due to bronchopneumonia, so that the statistics do not detract from the “medical power”.

But even more immoral, and criminal, is to refuse to buy or bargain for the vaccines already approved in the world, which through the WHO’s COVAX mechanism cost $ 1.60 per dose, that is, no more than $ 35 million with convenient payment terms, to vaccinate the 11.2 million Cubans. No, you prefer to hold the Cuban people hostage, keeping immunization on hold ─at the height of the pandemic in Cuba – at least until August, to wait and see if any of those domestic vaccine candidates with politicized names are then ready.

And that would be just the beginning, because to achieve herd immunity and for the spread to begin to decline, it is required that at least 80 percent of Cubans have the antibodies. Which of course will take more months and will allow the virus to continue claiming victims among a vulnerable population, neglected by your regime that does not provide enough food and medicine.

Mr. Castro, to brand someone as immoral, your morals are in underpants. If you’re not shy about doing it, at least don’t try to avoid being yelled at that the emperor is naked. Or in underwear.