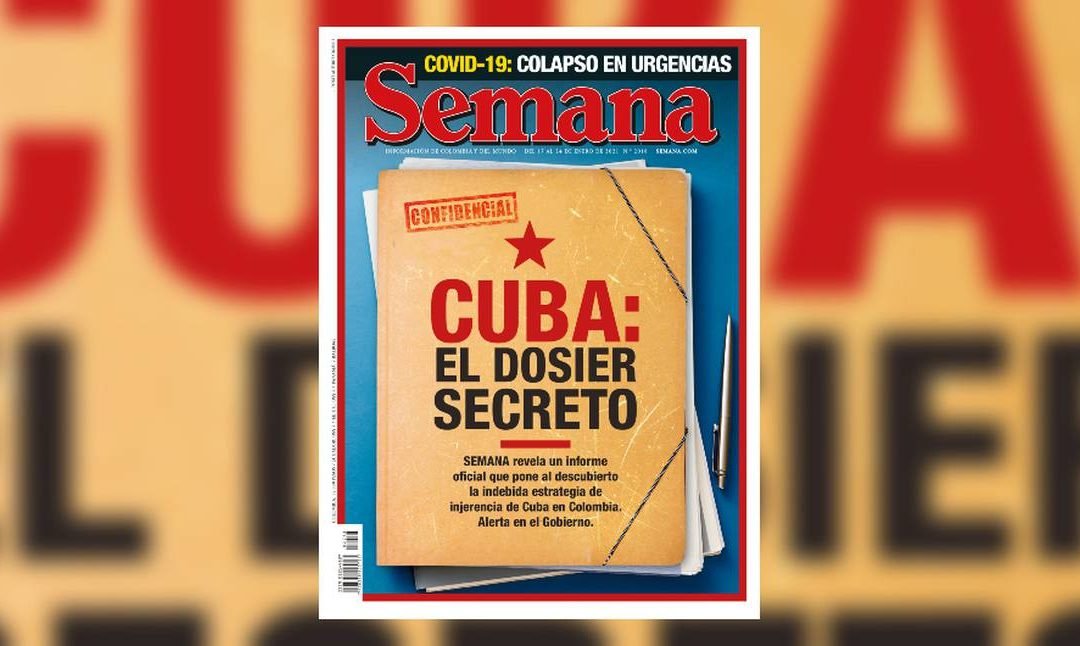 A recent report in Semana magazine, focused on a dossier submitted by several Colombian government agencies to the country’s presidency, warns that there are Cuban plans to interfere in the domestic 2022 elections, destabilize the country and even hit national security targets.

In the document sent to the presidential palace, Casa de Nariño, “Strategy of Cuban interference in matters of Colombia’s independence and sovereignty”, it is noted: “Cuba executes a strategy of interference in Colombia through the orientation by Cubans with diplomatic coverage of social solidarity organizations, the infiltration of cooperation programs with local authorities and their financing through the ELN (the terrorist National Liberation Army)”.

The Cuban ambassador to Colombia, José Luis Ponce Caraballo, is mentioned in the report, recalling his expulsion from the United States for espionage on August 19, 1996. Inquiry sources told Semana that they are investigating whether Ponce and his second in command in Bogotá would be aware of the Cuban plan for undue interference in the internal affairs of the country.

In May 2018, martinoticias.com published a report by Cuban investigator Luis Domínguez, “Extensive espionage center at the Cuban embassy in Colombia”. It focused on the presence in the Cuban mission in Bogotá of about eight spies from the Intelligence Directorate of Cuba, some of them as seasoned in the spy game as the Ambassador and colonel of the DI José Luis Ponce Caraballo.

Domínguez’s work identified two other high-ranking Cuban intelligence officers in the small embassy located at Bogota’s El Chicó neighborhood: the mission’s DI chief, Joel Marrero Enríquez, a lieutenant colonel under the coverage of Press Counselor, and Julio Cesar Guillén Villela, First Secretary. According to a Directory of the Diplomatic Corps accredited in Colombia Guillén Vilela is no longer there, but Ponce and Marrero are.

The dossier also notes the entry in Colombia between 2017 and 2020 of 1,500 alleged Cuban sports coaches, 900 teachers and 1,500 Cuban doctors, none of them covered by cooperation agreements.

The report cited by Semana magazine specifies that Cuban interference activities would be camouflaged as the legal Colombian Movement of Solidarity with Cuba (MCSC), which has a close relationship with the Cuban Institute of Friendship with the Peoples (ICAP). ICAP is currently headed by Fernando González Llort, a former spy of the Cuban Wasp Network disbanded by US authorities in 1998.

According to the dossier submitted to Colombia’s presidency, this movement comprises 23 solidarity houses throughout the Colombian territory, some linked to the ELN’s National Urban War Front, which finances them through raffles and events. The authors consider that parallel tasks of recruitment-indoctrination are promoted through this organization among young people with a profile of dissatisfaction and vulnerability, as they do not receive support from the State, and social protest is promoted to hit the current Government and generate an atmosphere of instability and chaos.

In November 2019, the Foundation for Human Rights in Cuba published an editorial titled “Colombian Democracy Rejects an Assault by Cubazuela.” The piece read: “Like a carbon copy of what happened before in Chile and Ecuador, organized vandals tried to hijack a legitimate democratic protest by setting fire to public buildings, shops and Transmilenio, the heart of Bogotá’s public transportation system.”

“The Colombian press reported how this small bunch of hooded instigators of chaos and violence were rejected by the real protesters.”

After the attempts of Russia, China and Iran to influence the US elections were exposed, the “Semana” feature quotes the secret report on the “possible impact that Cuban interference may have in an electoral year in the region. Ecuador, Peru and Chile will hold presidential elections in the coming months, and Colombia will also elect a president next year. The underlying concern, according to this document, lies in the possibility that the interference of the Cuba-Russia-Venezuela axis ends up being decisive to favor a victory of the left, which in recent years had been losing political ground in the region”.

Then the report’s authors estimate: “Today, Colombia is considered the jewel of the crown in the region, because throughout its recent history it has been able to keep its institutions and democracy shielded despite all threats and interference from foreign governments.”

In fact, Colombia represented a democratic geopolitical wedge during the advance of the so-called 21st century socialism in the region. But in the secret dossier on Cuba’s interference, it is said that “the authorities identified that the Cuban tentacles have an interest, sympathy and close relationship with a candidate to the country’s Presidency.”

Luis Domínguez’s report in 2018 noted how “the Cuban Embassy (in Colombia) normally maintains a staff of 15 diplomats, but four more arrived in late 2017 and early 2018 to reinforce the team in this election year in Colombia, and look for ways to help those parties linked to the Havana regime. ”

If the Democratic government of Joe Biden decides not to be carried away by the radical wing of that party and to keep the United States as the leader of the free and democratic world, it should reject in shaping its policy towards Havana any Ana Belén Montes-style  evaluation on the supposed irrelevance of Cuba as a threat to US national security and, especially, to that of its democratic allies in the hemisphere.

The new Democratic government of the United States should not be carried away by the radical wing of that party to espouse the criteria sown by spy Ana Belén Montes about the supposed irrelevance of Cuba as a threat to its national security and, especially, to that of its democratic allies in the hemisphere.