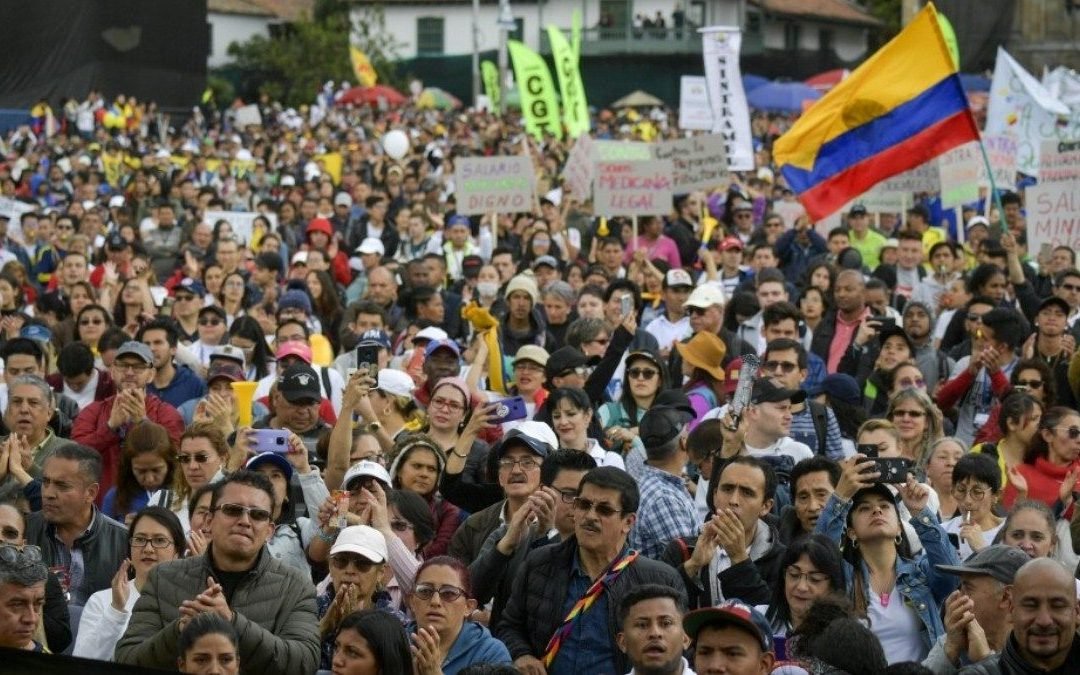 The recent national labor strike in Colombia is the second tug of ears given by Colombians in less than a month to President Ivan Duque, a hard-working democratic leader who barely sleeps.  On 27 October his Democratic Center party lost elections for local and regional authorities in 30 of the country’s 32 Departments, including their Medellín, Antioquia, stronghold, and the Capital District of Bogotá.

Now a noisy and sustained pot-banging protest, as well as long marches that brought in students, indigenous people, trade unionists, artists and other sectors, have come to highlight that Duque’s 15-month administration is seen as insufficient by the population, which is using the President as a lightning rod to vent their frustration with old problems like corruption and deep social inequality and recent ones like the impact of nearly one and a half million Venezuelan refugees in their society.

“It’s the Venezuelans” was the phrase blown up when, as a carbon copy of what happened in Chile and Ecuador, organized vandals attempted to hijack the legitimate democratic protest by burning public buildings, commercial stores and Transmilenio stations and buses, the heart of Bogota’s public transportation system; then they launched on social media, as Bogotá’s incumbent mayor Enrique Peñalosa remarked, a campaign of messages to sow panic even among the tenants of the city’s middle-class residential complexes.

Colombia’s free press reported how these minority instigators of chaos and violence were rejected by the real protesters in a country already fed up with drug traffickers, illegal armed groups and criminal gangs.

Yes, there may have been among the demonstrators some Venezuelans who left everything behind to find freedom and a better future in the neighboring country, but as the Bible says, by their fruits you will recognize them: the hooded leaders of violence ─Noticias Caracol filmed one of them leading the arson at Plaza de Bolívar with hand signs ─ seemed to follow the same instructions issued from Havana and Caracas that were put in place to destabilize the democracies of Chile and Ecuador.

President Duque closed the borders for 48 hours and put military forces on high alert before the announced national strike.  That’s not enough.

Nor is it enough for Colombian intelligence to track the Cuban envoys, such as the alleged Cuban doctor they captured in March spying on the Palanquero air base; or the apparently peaceful horse breeder who was arrested last year for coordinating shipments of cocaine produced by the FARC’s “dissident” fronts to cartels in Mexico via Venezuela; or like the agitator who first made headlines with alleged plans to attack U.S. diplomats in Bogota and then changed the narrative and said he was a member of a Cuban exile organization that no one knows and that his real targets were the presidential candidates of the left.

These news stories that usually appear somewhere in the Justice section of El Tiempo newspaper or in some investigative report of Semana magazine should have more resonance and consideration at home and abroad, even at the Presidential level and that of his representatives in international forums.

President Duque has several tasks ahead of him for the rest of his term in office, and they are all difficult: listening to Colombians, getting closer to them, and at least starting to respond to their demands ; trying to unite a highly polarized country in danger of making, out of discontent, an irreparable mistake in the upcoming elections; and ensuring that Fidel Castro’s dream of annexing Colombia, with its immense resources, to Cubazuela, does not come true.