The War Against All The People 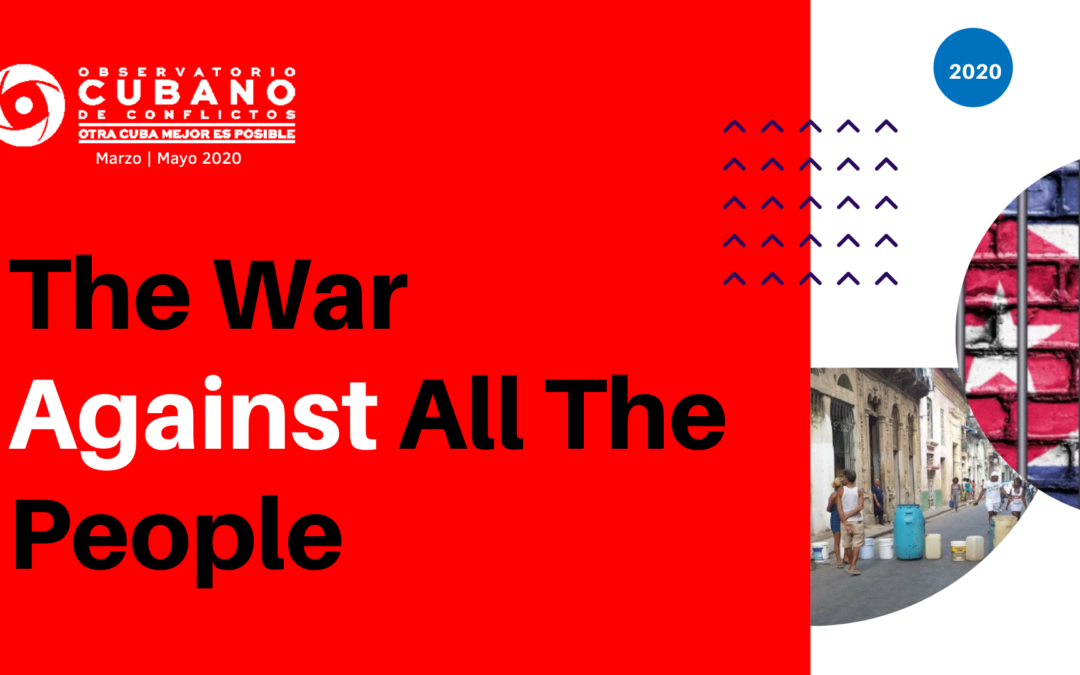 In recent months, the Cuban regime has installed a state of siege disguised as a health emergency. In its repressive actions, the now revamped police State prioritizes an even more draconian suppression of the freedoms of information, expression and movement, not only of political activists but of the entire population.

This new situation has changed the context of conflict. As a well-known Cuban actor put it, today’s Cuba has become “a dissident-producing factory”. If protests were previously held in private, now they are an outcry. So the source of the threat to the totalitarian elite also changed. The people are now their main and most immediate enemy. The Ministry of the Interior is now joined by the Revolutionary Armed Forces in the task of repressing and controlling Cuba’s citizenry.

In other words: the State no longer believes in the “socialist” masses: instead, it is afraid of them.

The government’s national defense doctrine stopped giving priority to a potential external aggressor (War of all the people) and it is now conceived as a war of internal security (War against all the people). The immediate enemy is no longer the US Marines, but Cuban citizens themselves. The new national security doctrine is part of a transition: from a Bureaucratic State Socialism regime, in control of the dollarized segment of the domestic economy, to a Military State Capitalism regime.

After the State backed out from the duty of taking care of the population needs, few things are more emblematic of this new War Against All the People than bringing into play the special troops ─known as “red berets”─ of the Revolutionary Armed Forces, FAR (Army). Their unheard-of deployment in Cuban cities reflects the growing fear of the power elite that an unpredictable spark might set on fire a parched prairie of discontent and disappointment. Suitably named as Army Prevention Forces, these corps is now engaged in the “heroic” harassment of ordinary fruit and produce carters and self-employed workers in Cuban cities.

Hunger without political or civil rights

The new Cuban State broke the social contract traditionally imposed in communist societies to co-opt the population: suppression of political and civil rights in exchange for guaranteed work, education and health.

This new governance regime disregards the urgent needs of the population, thus generating broad layers of poverty and possible famine. From Fidel Castro’s unfulfilled promise: “Freedom with bread and bread without terror”, today they are transitioning to “Terror without bread and without freedom”.

A Mafia and dollarized Military State Capitalism has emerged from within the Bureaucratic State Socialism, which has long been obsolete and bankrupt. The former is managed for their benefit by a murky, minuscule power elite: barely 0.01% of Cuba’s 11-million inhabitants. The latter is controlled by a thick layer of generally mediocre political and administrative bureaucrats. Their privileges are way smaller than those of the members of the power elite. Deprived of resources and real power, the only thing the bureaucrats have to appease the people’s discontent is slogans. They are unable to generate real change, because the real power is monopolized by the insatiable power elite, in control of the profitable sectors of the domestic economy through their economic-financial empire: the military-held GAESA, or Grupo de Administración Empresarial S.A. (English translation: Entreprenurial Management Group, Ltd).

GAESA’s economic rationale ─increasing its foreign-exchange profit margins by plundering salaries, taxing remittances and imposing exorbitant monopoly prices in its retail stores─ does not include investing in public services or domestic food production. Such tasks were previously carried out by the now bankrupt Bureaucratic State Socialism regime in order to retain the loyalty of the population.

So you have to ask yourself: if Cuba’s current socio-economic crisis keeps worsening, would there be social outbreaks that might jeopardize governance? Would this tensions lead in the short term to an overhaul of some policies or to a harsher repression? If a harsher repression is resorted to, would the tendency to organize and escalate popular resistance to the system be strengthened? Everything is possible. Nor should we lose sight of the fact that the external context also affects the strengthening or weakening of one scenario or the other.

For Cuba-engaged domestic and international players, new alternatives open up in today’s context of increasing uncertainty that were deemed, until very recently, not only improbable, but outright impossible. For better and for worse.

(Excerpts from the Cuban Observatory of Conflicts’ report “The War Against the People”, by Juan Antonio Blanco and Rolando Cartaya).