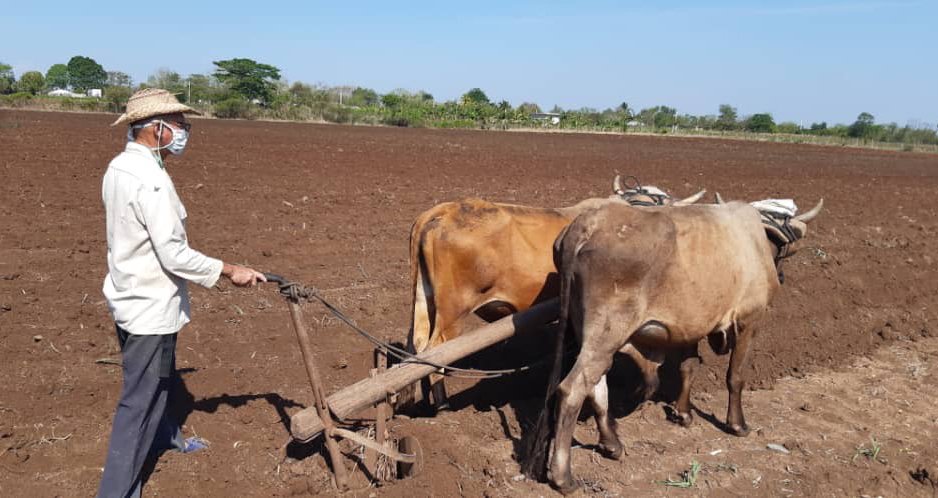 For decades, there was a very popular slogan in Cuba: “There is no country without sugar” (it was credited to Cuban sugar industrialist José Manuel Casanova). Some regarded it as an overestimation, but they were wrong. Fidel Castro came to prove that it was true. Today there is no sugar on the island, and there is no country either.

With the dramatic destruction of Cuba’s agriculture ─as well as of the country’s economy in general─ brought about by the communist system, a new slogan has emerged: “There is no country without  private farming”. Only this time it is not a phrase that can be accepted or not, but a matter of life and death that concerns all ordinary Cubans. This is something so crucial that, if it doesn’t come to pass, there will be a famine in Cuba.

The sad thing is that this is happening on a tropical island of fertile lands that, before being seized and devastated by the totalitarian regime, made of Cuba the largest exporter of agricultural products in Latin America compared to its population, according to a 1957 report by the UN’s Food and Agriculture Organization (FAO).

The country was self-sufficient in beef, milk, tropical fruits, coffee and tobacco, as well as in fish and seafood, pork, chicken, edible roots, vegetables, and eggs. Cuba even exported surpluses of quite a few of those products. It was also number one in Latin America in fish consumption and number three in calories consumption, with 2,682 per day. There were more than six million head of cattle in a country with a population of six million ─one cow per inhabitant─ and almost 1 billion liters of milk were produced each year. Cuba was known as the owner of the best tropical livestock in the world and had displaced the US in the export of stallions of the zebu breed to Latin America, about 1,000 bulls per year.

When Fidel Castro grabbed power, he imposed an Agrarian Reform law to expropriate the estates of landowners, with the supposed goal of sharing them out to landless peasants. Yet, advised by Che Guevara, an ideological enemy of private property, Castro did not allot all the confiscated land to the peasants, but for the most part nationalized it and created large State-controlled agricultural conglomerates akin to the Soviet sovjoses in the USSR and Mao Zedong’s communes in China.

Soon enough, the adverse outcome became obvious. In a flash, agricultural and livestock production collapsed and just from 1962 to 1963 the sugar harvest fell from 6.8 million to 3.8 million tons. The country almost ran out of foreign currency to import food, equipment, and raw materials. As a result, in March 1962 the food ration card (“la libreta”) emerged. It has lasted 58 years and counting.

Today, instead of one cow per inhabitant there are three inhabitants per cow. There are 3.6 million head of skinny cattle for 11.2 million inhabitants, and the production of milk is less than half the amount reported 62 years ago. If Cuba then produced 60,000 tons of high-quality coffee that it exported to the world, today it barely racks up 8,000 tons.

One third of the arable land is idle

Astonishingly enough, almost 33% of the arable land is idle and fruitless today on the island, including 1.3 million hectares (3 212,370 acres) completely covered with marabou, a brushwood species full of thorns. And the huge State-controlled farms have some of the lowest crop yields around the world.

Private farmers, either individual or grouped together in cooperative holdings, only have 23.4% of the 6.3 million hectares of the country’s arable land. The State owns the other 76.6%, including 49% assigned to State enterprises, while the rest is land leased by the regime to some 244,000 private tenants.

The amazing thing is that the State, despite owning more and better land, as well as equipment and technological resources, barely turns out between 10% and 12% of the country’s agricultural and livestock production. The other 88% to 90% is contributed by private farmers and tenants of State lands.

In short: without private property and a free market no economy or agriculture can thrive. Therefore, food is critically scarce in today’s Cuba. Subsidies from abroad have ended and the country’s main sources of foreign exchange have collapsed. There is no money to import food (80% of the food for domestic consumption is imported) and the nation is heading towards a famine of unheard-of dimensions.

It is imperative right now to dismantle the unproductive and absurd Castro-Guevara-style sovjoses; to give the land in property to those who want to plow it; to abolish the State’s crop-collection Acopio mechanism so that  farmers are allowed to produce freely and sell their crops on the market at the prices they choose to set; they should be authorized to freely  import supplies and tools for their work and to export their products.

As the League of Independent Farmers and the Cuban chapter of the Latin American Federation of Rural Women (FLAMUR) say in their five-point manifesto: “There’s no country without the countryside.” And there’s no countryside without private agriculture, nor will there be food for the population.