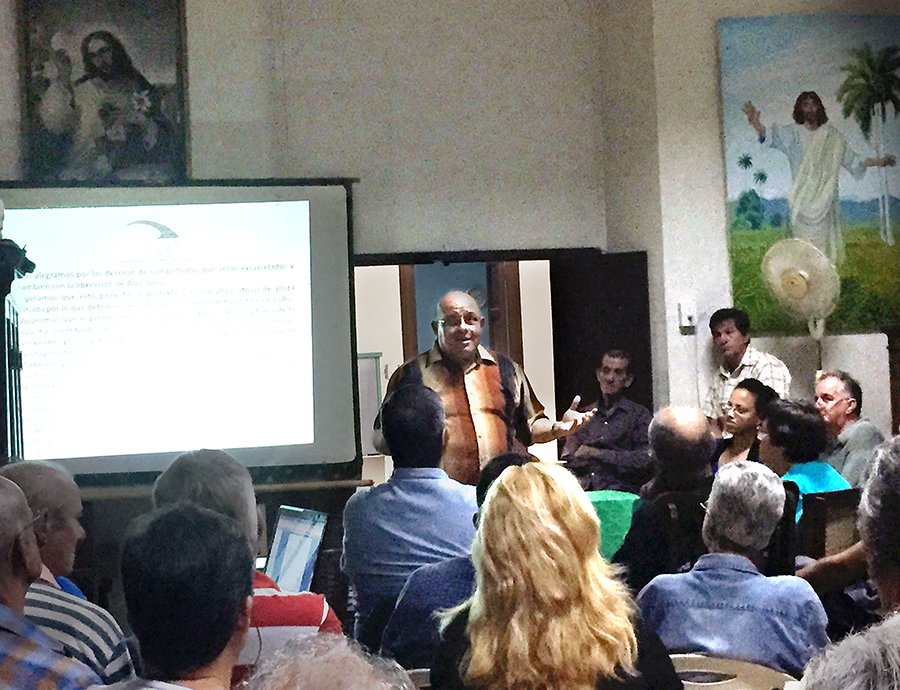 In a special report for El Nuevo Herald, the Spanish language daily describes human rights activist and Catholic intellectual Dagoberto Valdés, as a man on a mission who, around the fertile sugar and tobacco fields of Guanajay, Cuba is “sowing seeds of democracy just a few steps, half a block, from the police station.” Inside the local church of San Hilarión, “surrounded by the faithful who fill one of the parish halls on a January night, Valdes says that this new era belongs to them, the average Cuban, the people, and not to the governments of Cuba or the United States.”

That said, one of the areas that the civil society leader emphasized  in the opening of U.S. – Cuba relations was in providing new tools for the modern age in Cuba: “Also U.S. companies may be able to export phone, computer and internet technologies” mentions Valdés while educating local Cubans on the new relations, many of whom remain largely disconnected from outside news and information, especially in the more rural provinces.

Valdés goes on to declare that the people of Cuba “no longer have the external ‘enemy’ that was the cause of all our problems. Now things will be resolved when we Cubans get down to resolving them.” He adds that “it’s time for the Cubans to assume leadership to live democratically, without repressing those who express a dissenting position. Cubans must tolerate, we must cease to take each other as prisoners, to drag the Ladies in White [a form of physical abuse carried out by Cuba’s repressive political enforcers] who are also Cuban.”

The agricultural engineer, former tobacco worker, and current editor in chief of the independent publication Convivencia believes that “all human beings are entitled to prosperity in their own lives,so why would a travel agent have more rights than a lawyer? Or why do barbers have more facilities and not engineers or architects? Here in Cuba there are all kinds of talent, we are exporting our intellectual wealth. But we want everything to get better, with or without the United States, because that is our own problem.”

As a faithful Catholic, Valdés was encouraged by the Church’s role in facilitating conversations between the U.S. and Cuba, and believes it should “continue to facilitate negotiation mechanisms in the search for a dialogue between the Cuban government and independent civil society on the island.”