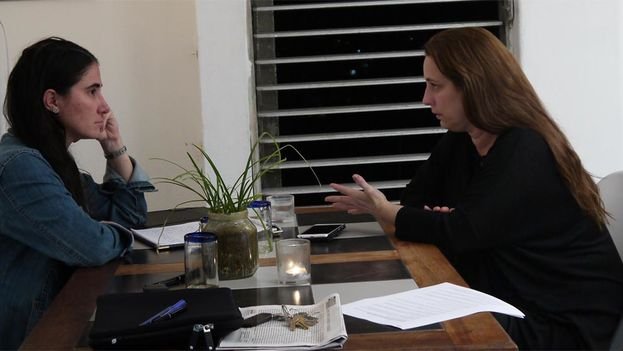 Yoani Sánchez recently conducted a sit down interview in Havana with Cuban artist Tania Bruguera, whose #yotambiénexijo project is generating lots of buzz on social media as well as some serious retaliation by the Cuban dictatorship. Bruguera is currently awaiting legal action by local authorities for attempting to conduct the artistic performance on December 30th of last year. Below are some excerpts from the interview published originally on 14yMedio:

Yoani: What is your current legal and immigration status?

Tania: I’m waiting for a prosecutor to present the measure that I will be imposed. I have been advised by several lawyers, including Laritza Diversent from Cubalex, and  René Gómez Manzano from the Corriente Agramontista. They have told me that in this case there are at least three possible outcomes: one is the dismissal of the case, which may be temporary or permanent. Another is that I am imposed an administrative measure, which carries a fine. The detail with this option is that I would have to admit my guilt to accept the charges and the accusations made of me, and I do not think this variant is just. The third possibility is to be brought to trial, although it seems that is unlikely.

Yoani: Among the worst nightmares of many Cuban immigrants is that of visiting the island and then not being allowed to leave. Do you live like this?

Tania: For me it’s the opposite. My nightmare is that I am let out but am not allowed to return. Indeed, if tomorrow they returned the passport that was seized from me, I will not leave. I need to be absolutely sure that there will be no bitter surprises like not being able to return. Beyond that, what I have experienced in recent weeks has changed my life. I’m not going to stop being an artist ever, but maybe now I have to be here. They have to understand that they cannot remove from the country anyone who bothers them.

Yoani. What was the proposal by [Cuba’s] National Arts Council?

Tania: They proposed for me to do [the performance] inside the Museum of Fine Arts in the Cuban Arts building. I told Ruben del Valle no, first because of a cosmetic problem. There was no point repeating the same work of 2009, so I told him that five years later it was not within the institution where this had to be done, but that we had to conquer the streets. I suggested then that we do it on the front steps of the museum, but he insisted that it should be on the inside and the right of admission reserved, so as not to allow the entrance of “dissidents and mercenaries.” He boasted that the opposition represented only 0.0001% of the Cuban population, to which I replied that I was often 0.0001% of something and that was good because the existence of minorities was also necessary.

Tania: I make political art. For me there is a clear division in art, on one side is that which is representative because it comments, and the other side, art which works from the political because it wants to change something. I make art that appropriates the tools of politics and tries to generate political moments, an art through which one speaks to power directly and with its own language. For example, I had a school (Cathedra Arte de Conducta) for seven years because education is a long-term cornerstone of the politicians. I also did a newspaper twenty years ago (Memoria de la Postguerra) to “take” the media as they do and now it is time for the streets, plazas and places that they believe belong exclusively to power.

Yoani: Do you think that after the 30th of December an “Occupy Wall Street” in Cuba is closer?

Tania: This is what they fear the most. Even in the various meetings I had with the cultural authorities and officials they told me that I wanted to do the same as what occurred in the plazas of Ukraine. That is their great obsession. The irony is that they think “Occupy Wall Street” is great when it happens over there, in the United States, but clarify that here they will not permit the plazas to be used for something like that.