TheLadies in White history begins back in 2003 when seventy five individuals were arrested and jailed by the Cuban government. These individuals were all human rights defenders, independent journalists and activists. The group was unjustly tried for acts against the state and some of the arrested were sentenced to prison for twenty eight years. Two weeks after the arrests, Laura Pollan lead the organization of the group Ladies in White. The group is made up of wives and other relatives of the prisoners. 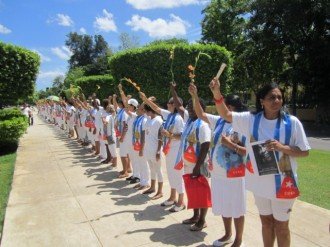 Since 2003, there have been more arrests and more and more prisoners or conscious. This has led the Ladies in White group to continue its efforts. The group protests the arrests by consistently attending mass wearing all white clothing and then joining together for a peaceful protest walk to a nearby park. The white clothing symbolizes peace. The group as a whole, as well as many individual members have been unjustly attacked and threatened time and time again but the peaceful protests continue.

A major piece of the Ladies in White history came in 2005 when the group received the Sakharov Prize for Freedom of Thought from the European Parliament.

On Palm Sunday in 2005 the Ladies in White were faced with counter-protest efforts from 150 members of the pro-government group the Federation of Cuban Women.

In 2010, Cardinal Jaime Lucas Ortega y Alamino intervened for the group which has helped, in recent years, keep the intimidation and opposition to a minimum. The Ladies in White are generally left in peace when protesting in front of his church.

The history of the Ladies in White is compelling and provides a better understanding of the group’s current efforts to work for peace and justice in their home country. For the past several years, the group has hosted parties for children that include entertainment, games, gifts and goodies. The Ladies in White are truly a light in a dark place and The Foundation for Human Rights in Cuba is proud to support their efforts and their cause.