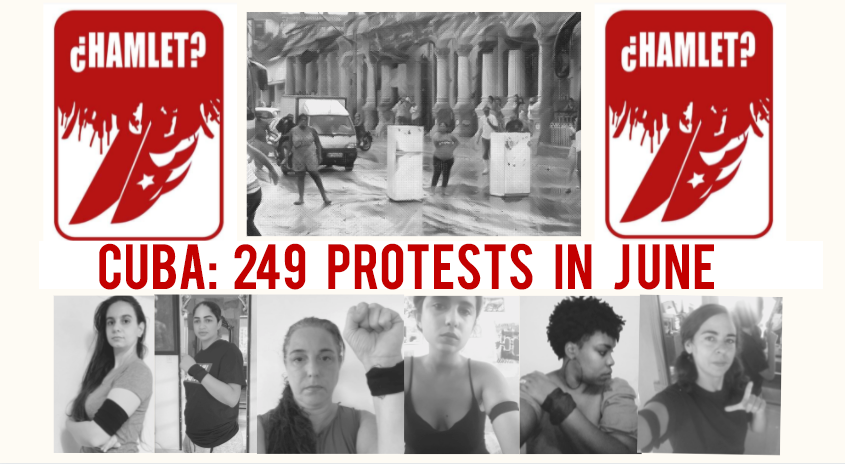 Despite the house arrests and imprisonment of activists, the expansion of the Covid-19 pandemic, long lines due to a shortage of essential goods and the curfews, there were 249 public protests in Cuba during the month of June, an 8% increase compared to May (from 231 to 249 last month), the Cuban Conflict Observatory (OCC) reported.

The new “conflictometer” ─ a monthly evaluation done by the organization─ specifies that 116 of all those demonstrations of disagreement (47%) were related to political and civil rights, while the remaining 133 (53%) were associated with the demand of economic, social and cultural rights. So for the first time in a month the latter outnumbered the former. This might be due to the impact of an aggravated socioeconomic and health situation in the country.

The report highlights that monthly public protests increased fivefold during the last 10 months, with a total of 1,525 public rallies of disagreement throughout the island during that interval.

A distinctive feature of the protesting actions in the month that just ended was that, concurring with the ravages caused by the COVID-19 pandemic, those motivated by the collapse of the health-care system (46) spread throughout the island for the first time

The OCC report points out that “protests against the poor state of hospitals, compulsory confinement centers and the total absence of basic drugs ─from aspirin to antibiotics─ put an end to the myth about Cuba’s health services. Inequality is brutal in this area. While special hospitals for the military and the political leadership do not lack anything ─not even foreign vaccines against Covid─ ordinary Cubans must be taken care of at filthy medical facilities, full of rats and cockroaches but empty of medicines, where they are used as guinea pigs to test vaccine candidates not even been validated within the island .”

On the other hand, in parallel with organized protests, individual protests from different sectors of society have been thriving, even under the Government-imposed movement restrictions and curfews. Among others, Fernando Gálvez, a priest from Camagüey; Dr. Alexander Pupo, a physician from Holguín, and poet Katherine Bisquet expressed themselves critically on the social networks in June. At the same time, spontaneous outbreaks occurred in the streets with women at the forefront, such as a traffic blockade staged by Cuban women on Havana’s old Calzada del Cerro and protests of neighbors elsewhere against police violence.

The Cuban Conflict Observatory concludes its monthly report by remarking that “the Cuban military leadership still don’t get it. They don’t get that this Cuba of 2021 is not the same one that they subjugated in 1961. They are still mental prisoners of the KGB and Stassi manuals. So they keep looking for ‘organizations’ to penetrate, ‘leaders’ to liquidate, ‘ideologies’ to repress. Spanish playwright Lope de Vega could come forward from the Golden Age and explain to them that the answer to ‘Who killed the Commander?’ is still ‘Fuente Ovejuna, my Lord’ .”