PROTESTS GROW IN CUBA: 231 IN MAY. A 13% INCREASE COMPARED TO APRIL 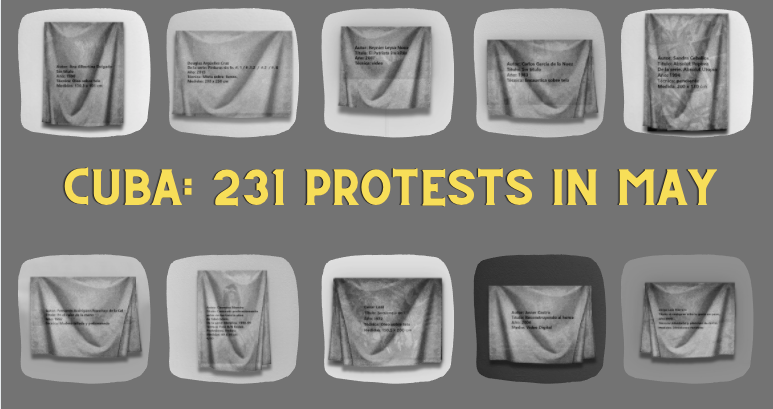 Despite the house arrests, disconnected telephones and cutting off of internet access against civil society activists during the month that just ended, public protests in Cuba increased by 13% in May as compared to the previous month: they grew from 203 in April to 231 in May, indicates the Cuban Conflict Observatory’s (OCC) monthly Conflictometer.

Such figure represents a rate of more than seven protests per day in May, the ninth month in which the OCC counted them, yielding a total of 1,276 altogether across the island since last September.

Of the 231 public demonstrations staged last month, 145 (67%), were related to political and civil rights, while the remaining 86 (37%) were associated to demands for economic, social and cultural rights. The latter doubled during the target period, going from 47 to 86.

Although from the fourth to the fifth month of the year the demonstrations for civil or political reasons continued to increase in absolute numbers (from 47 to 86), they decreased in terms of percentage of the total, which might have been motivated by the house arrest of the activists, plus the famine and deterioration of the public health system that spread across the island.

Many of the political protests (60) were linked to the abduction in a hospital of the leader of the powerhouse San Isidro Movement, Luis Manuel Otero Alcántara, and the imprisonment of the (25) participants in a peaceful, but audacious demonstration, staged at Old Havana’s busy Obispo street on April 30.

Consolidating the OCC’s criterion that repression only breeds more public manifestations of discontent, 51% of all protests (120) were in direct rejection of the Government crackdowns.

Among the most prominent features of such grassroots effervescence in May, the OCC’s Conflictometer exposes how the abduction of Otero Alcántara in the psychiatric ward of the Calixto García Hospital raised a wave of protests within Cuba (60), provoked others outside and led to international complaints about the criminal use of medicine as an instrument of repression in Cuba.

The OCC noted as well how common citizens increasingly show their solidarity in the face of police abuses, be it when the officers tried to arrest a mother and seize a bag of food from her, when university students demanded the release of a participant in the protest at Obispo Street, or when people stood by opposition leader Guillermo “Coco” Fariñas, as he was arrested in Santa Clara while paying public tribute to founding father José Martí.

On the other hand, the military elite that really rules the island has turned its back on the most essential needs of the population, without setting market forces free or abandoning the totalitarian police State, which has caused a cracking up of the symbolic capital of the so-called “Welfare State”.

This generates at the same time a growth in the fabric of the independent civil society, resulting in the creation of new associations and a breakdown of the State’s monopoly on the institutions representing these sectors.

Abroad, protests initiated on the island become internationalized, to which the regime has responded with a threat of extraterritorial repression that appears to be inspired by similar behavior by its international cronies. An example is the recent Belarussian government’s air hijacking, intercepting a commercial flight in which Belarussian opposition activist Raman Pratasevich was a passenger. In other words, Havana is threatening to apply its repressive domestic laws to nearly three million Cubans living outside of Cuba.

The Cuban Conflict Observatory concludes its monthly report by noting that, of the three pillars of totalitarian power, namely, an ideology sustained by the State’s monopoly on information, the economic and social dependence of the citizens on State institutions, and the fear enforced on them by State repression, only the latter remains. Yet, despite the state of terror that they are struggling to impose, also the citizens’ fear has begun to crumble.