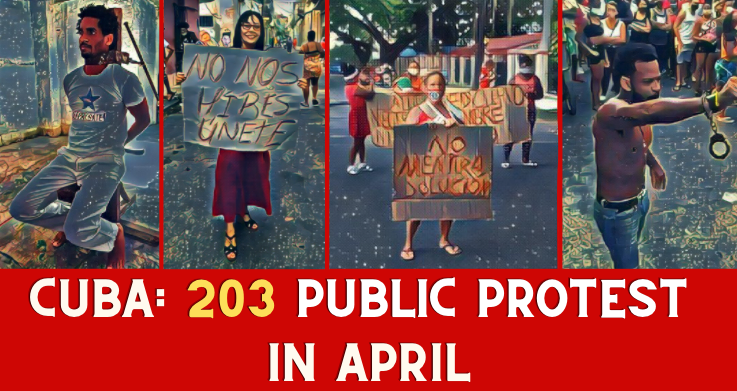 For the first time, public demonstrations of protest exceeded two hundred: 203. That amounts to 6 protests per day, compared to the 5 averaged last March. In September of last year ─in which there were only 42 protests─ the average was one per day. On the other hand, there have been 915 protests throughout Cuba since November, when the confrontation with the San Isidro Movement and the 27N began to escalate.

Despite the repressive wave, the militarization of the country, the Covid-related curfews, the house arrests of many activists and the extreme security measures around the celebration of the 8th congress of the PCC, public protests continued to grow in the month of April, the Cuban Conflict Observatory (OCC) points out in its latest monthly evaluation, noting that the regime has never tolerated dissent, but it is clearly incapable of extinguishing it, so the insubordination grows.

The Observatory’s “Conflictometer” specifies that the state of siege against dissidents intensified in the country in April. On the one hand, physical attacks escalated with acts of repudiation, beatings, arbitrary arrests, house arrest and death threats. On the other, they were attacked with communications cuts, destruction of their cell phones, assassinations of reputation in the mass media, illegal surveillance at the doors of their homes and threats against their children.

57% (117) of the protests in April were in rejection of police repression and abuse. This data confirms that, far from neutralizing the protests, the policy of repression multiplies them.

Despite all this pressure, April closed with a multiplication of the demonstrations. Many of them sought to support the hunger and thirst strike of Luis Manuel Otero Alcántara in demand of his rights as a citizen and artist, being the most significant that of April 30 on Obispo Street in Old Havana.

According to official government information, as the OCC was wrapping up its report the leader of the San Isidro Movement had been transferred ─after a week without eating or drinking─ to the Calixto García Hospital, where he is being held incommunicado. However, there is no proof of life of the activist or witnesses who have seen him enter that hospital. The “evidence” that the government has presented (a timeless video and a medical certificate that does not use professional language or bears the signature of any doctor) have triggered even more alarms and complaints. For all intents and purposes, up to the time of publication of this report, Luis Manuel can be considered to have been kidnapped.

Meanwhile, protests out of economic and social reasons in April (47, or 23%) were linked to the abusive imposition of fines, lack of medicines and housing, the increased cost of life due to the monetary unification and the expansion of the Covid-19 pandemic.

The situation of the pandemic has worsened, thus compounding the country’s socio-economic crisis. Such deterioration is coupled with the government’s refusal to purchase vaccines at affordable prices through the WHO COVAX mechanism, and its determination to develop indigenous shots which, even if they are able to produce them, is delaying the start of an immunization program on the island. Activists and disgruntled health personnel are peddling in pharmacies and hospitals flyers that read “Where is my vaccine?”

On the other hand, according to the OCC’s April “conflictometer”, the 8th Congress of the Communist Party of Cuba reflected ─vis-à-vis this heartbreaking landscape─ the disconnection from reality of that organization and its leaders. The fast-approaching famine, the collapse of the health and education systems, the failure of the country’s infrastructure – all of them transcendental issues for the ordinary citizen – were overlooked in favor of the hackneyed condemnations of imperialism and calls for ideological warfare.

Meanwhile, the number of workers and neighbors who refuse to collaborate with the repression is growing: judges who brush off convictions for “contempt” or admit habeas corpus for members of the opposition; teachers who refuse to participate in acts of repudiation. These events, among others, reflect a crescent bankruptcy of the regime’s ideological control and of certain components of the State’s repressive apparatus.

The situation ─concludes the April report from the Cuban Conflict Observatory─ is much more serious and uncertain than that of the so-called “special period” during the 1990s. This time it is not limited to an economic crisis, but it involves an ideological and political crisis as well. In this new context, any trivial incident might unleash an uncontrollable chain of events leading to the collapse of the regime.