Henchmen at the doors of Cuba’s Ministry of Culture 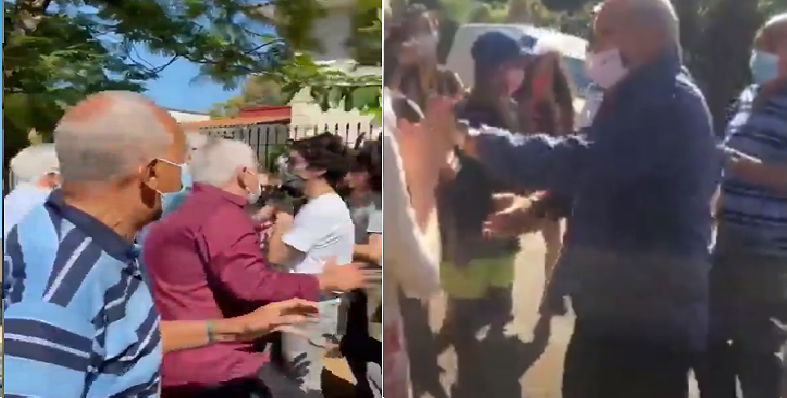 A spontaneous protest held on November 27 in front of the Cuban Ministry of Culture by more than 400 people ─mostly artists─ took by surprise the officials of that institution and the repressive forces.

Last week some of these artists went again to the park across the Ministry to peacefully read poems of Jose Marti in protest for colleagues that had been detained since then. But in this occasion, before they arrived, the regime had summoned its security forces and fenced off the streets to prevent another demonstration like the one held on November 27.

According to the victims and witnesses, everything was programmed. The first blow launched by the Minister of Culture Alpidio Alonso to an independent reporter was the green light for the operation to begin. At that very moment a bus came in and was parked in front of the group and the police started to beat and push the activists inside.

When hours later they started to be released, many of them, with the marks of the blows they received visible on their bodies, they began telling the world their testimonies.

“A crowd of people from Minint —the Ministry of the Interior— was pouncing on people. I was watching all that when a guy came from behind, grabbed me with a chokehold and said: “You’re gone,” said visual artist Henry Eric Hernandez.

“They jumped on me to take my cell phone, then they twisted my finger and broke it,” independent journalist Alfredo Martínez, one of the detainees, told international reporters, showing a fracture of a phalanx in his ring finger, confirmed by a medical report.

“I resisted getting on the bus and they began to beat me,” said scientist and activist Óscar Casanella, who showed the reporters pictures of bruises on one eye and his chest.

Reynier Leyva Novo received a blow to the lower part of the head as soon as he got on the bus. “It was a very strong blow that knocked my hat off. When I looked back several people were screaming and what I remember the most, what is stuck on my mind, are the screams of Camila Lobón and Celia González as they were being strangled.”

Inside the vehicle they showed no mercy with ladies such as artists Lobón and González and the curator and art critic Solveig Font. Henry Eric Hernández recounted: “One of them ─Celia─ had a police officer in civilian clothes sitting next to her and beating her. Celia yelled, “We are not criminals!” And I told her: “Celita, calm down.” Suddenly the agent turns over to me and says: “You shut up or I’ll keep beating her!” I thought she was bluffing, but the next thing I see is her beating Celia’s breast or arm, I can’t recall.”

Visual artists Camila Lobon and Celia Gonzalez also denounced that they were stripped naked and submitted to a vaginal search for recording devices.

The ominous Section 21 of counterintelligence pack may have accomplished the task of preventing another protracted protest like the one on 27N. But their repression backfired on the regime. The images of a minister and a deputy ministers of Culture leading a mob to attack young poets, artists, and journalists, followed by the aftermath of the physical abuse inflicted on them by the political police, highlighted before the world ─ especially before some international circles of art and culture that tend to idealize the regime─ its intolerance and brutality towards any form of free expression or civilized dialogue.

As visual artist Hernández later stated. “Perhaps not on purpose, but we made them reveal themselves as what they are: henchmen.” 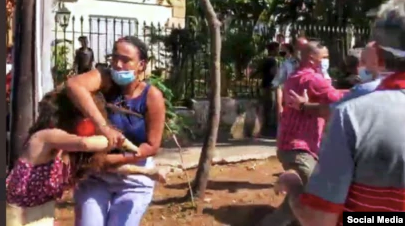 Violence in in front of the Cuban Ministry of Culture