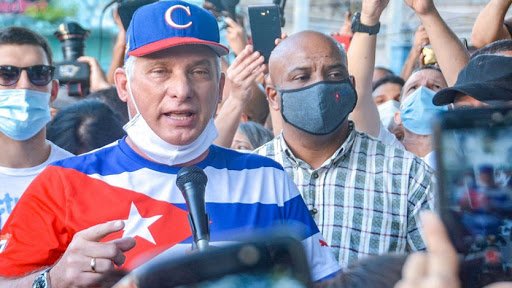 The Foundation for Human Rights in Cuba (FHRC) has decided to include in its database of Cuban violent repressors (www.represorescubanos.com) President Miguel Diaz-Canel and the new Minister of the Interior, Brigadier General Lazaro Alberto Alvarez Casas.

FHRC holds these two officials responsible for the new wave of brutal repression unleashed throughout Cuba against freedom of thought, speech and assembly. Both are ultimately responsible for the assault on the headquarters of the San Isidro Movement as well as for the prior blockade of food, water and medicine to that site, which prompted the hunger strike of those gathered there.

In particular, FHRC holds the president and the minister of the interior personally responsible for what may happen to artist Luis Manuel Otero Alcantara and professors Anamelys Ramos and Omara Ruiz Urquiola.

The San Isidro Movement is not alone in Cuba or abroad. We are not witnessing the end of this journey. It’s only the beginning.