The theft of the century: “Where’s my money?” 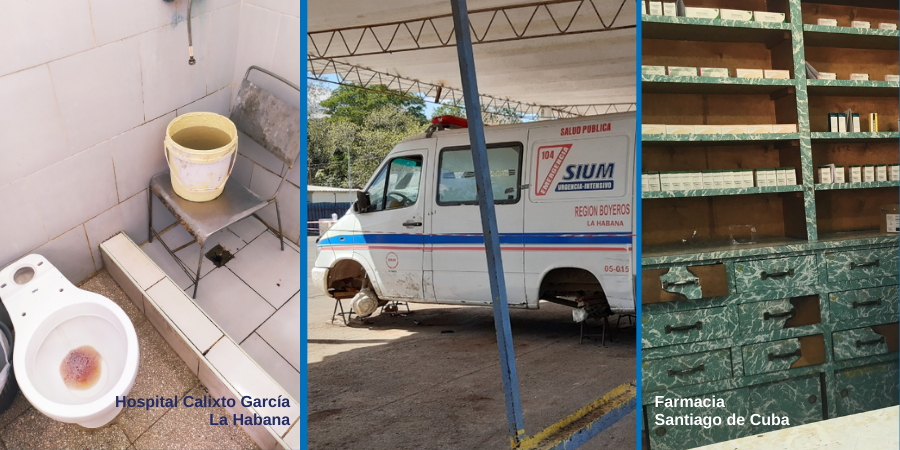 To ordinary Cubans, the math does not add up. If you believe the Government, the 75% rip-off of the salaries that the regime takes away from the doctors it sends abroad is marked to be reinvested in the domestic health system. But that’s not what common citizens have seen around in the last ten years.

Official figures provided by the National Statistics and Information Office (ONEI) and high-level officials suggest that the revenue earned by the medical brigades is higher than that reported by any other activity, including tourism. From 2011 to2015, hard-currency revenue from that source averaged more than $11 billion per year. In 2018, these brigades reported net profits of $ 6.4 billion.

Other damages should be added.

The Foundation for Human Rights in Cuba (FHRC) recently concluded a poll in all Cuban provinces on citizen perception of the evolution -both in quality and quantity- of the country’s health services from 2015 to 2020, as well as on the availability of basic drugs. About 85.6% of those who responded to the ten-question questionnaire described current health services as worse than in 2015, while 97.3% considered the availability of medicines to be worse, both in hospitals and the pharmacy network.

Despite this overview of national decrepitude regarding access to health services and medicines, in 2019 only 96.9 million pesos were invested in health and social assistance, as reported by ONEI. That is, the lowest investment figure in those sectors in the last five years.

Something must be wrong here.

Considering that the export of doctors in 2018 generated revenues of more than 6.4 billion dollars, why is it that barely $ 96.9 million were invested in 2019 in health services, which 85.6% of the population perceives as worse than five years ago? Why are pharmacies out of stock?

The difference is not peanuts. It means that about 3,3 billion dollars property of the Cuban people, that were snatched from the salaries of Cuban doctors abroad, were not invested in public health – as the official propaganda usually alleges – and so the money just disappeared. Where did it go? “Where is my money?”, the common citizen rightly asks.

The Mafia Of Havana

What we have witnessed in Cuba this 21st century is the emergence of a new mafia State controlled by a military elite that has transformed the country’s political economy for its own benefit.

As DIARIO DE CUBA underlines, citing its own research: “New commercial entities, under the guise of opaque limited companies, took over functions previously monopolized by the Government ministries, especially in the most lucrative activities.” In this context, “a Cuban Medical Services Marketing Company (CSMC) took over the business of exporting health personnel. At the end of 2017, there were Cuban health workers in 64 countries, with Brazil and Venezuela as the main destinations. The new scheme has radically redistributed the public health landscape in Cuba, affecting both professionals and the population. ”

The profits derived from exploiting doctors as slaves go to the black hole of the new elite of military power that nobody controls: neither Raúl Castro´s designated successor Miguel Díaz-Canel, nor the Councils of State and Ministers, nor the Comptroller of the Republic, nor the Supreme Court, or the National Assembly of People’s Power. No one. Just as nobody knows or controls their operations or the profits they get in other lucrative sectors such as tourism, communications, remittances and construction. The new Constitution does not apply to the Mafia of Havana.

In light of this, the inordinate disproportion of investments in construction this year seems even more curious, as Cuba approaches famine and the agricultural sector is the Cinderella of the national budget. There is no money to import food (that is, 80% of national consumption) but neither to invest in producing it. At the same time, investments in construction are growing, not to repair houses, but to build new hotels.

In political science, the paradigm of the 20th century’s dictatorial or totalitarian States is not enough to understand these paradoxes. It’d be wiser to approach them through a new paradigm: that of the modern mafia States that have emerged in the 21st century.

The most plausible hypothesis is that these tourist-oriented constructions – so unnecessary as famine approaches – are a facade for money laundering services based on over-invoicing that the new Havana mafia offers and charges to its international partners. They already did it with the renovation of the Port of Mariel, which they artificially over-invoiced, so that, from just under $ 350 million -its real cost- they were able to muster almost a billion dollars.

Clumsy, stupid, they are not. Scoundrels is what they are.