Evictions of the Homeless in Cuba 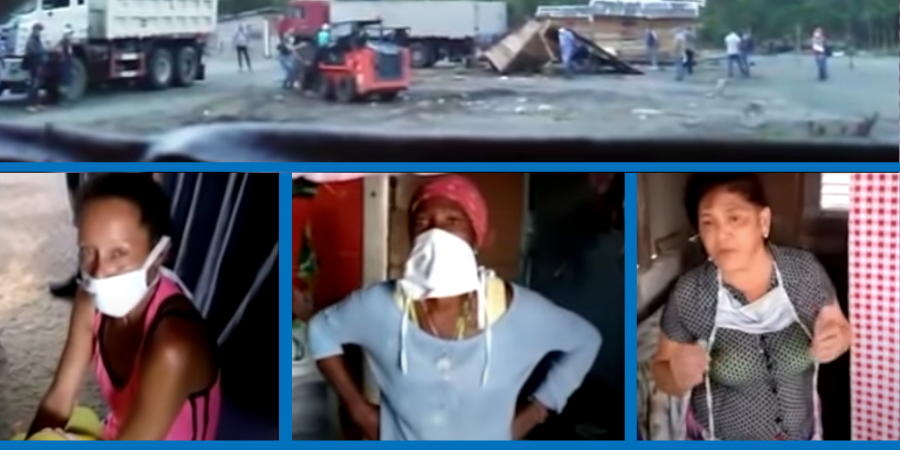 The current wave of terror and evictions of entire families into the streets being enforced these days in Cuba is even more brutal than the previous ones, because it occurs in the midst of the Covid-19 pandemic. On May 17th, a police force equipped with bulldozers entered unadvertently the Sierra Maestra neighborhood near Santiago de las Vegas, Havana, and completely demolished the humble homes of several families, mostly single mothers with their children, who saw the houses they had built with their effort disappear.

“There is enough stone, and there are arms to spare to make each Cuban family a decent home,” Fidel Castro wrote in his 1953 trial plea known as “History will absolve me”. He went on to describe as “monstrous” the evictions of poor families from their makeshift homes carried out at the time by the incumbent authorities, especially in rural areas and slums.

Sixty six years after Castro’s promise, no less than 7.4 million Cubans (67% of the population) do not have a “decent home”. And worst of all, the “revolution” constantly evicts poor families from their precarious homes, which are flattened. The housing crisis is endemic and as severe or more than that of Haiti.

Cuba’s 1976 Constitution included the citizen’s right to decent housing (1976), while the current one, approved in 2019, declares the right to adequate housing. A couple of examples that the Constitution down there is just a piece of paper. Not only is there no government plan to comply with such constitutional tenet, but the number and ferocity of the evictions of the homeless escalated in Cuba under the reign of Raúl Castro.

Eviction and destruction of houses

The Latin American Federation of Rural Women (FLAMUR) and the Cuban Women’s Network denounced on May 17th the aforementioned eviction of the Sierra Maestra neighborhood, in a letter addressed to designated president Miguel Díaz-Canel. The OAS Special Rapporteurs on Economic and Social Rights and the Inter-American Commission on Human Rights were copied.

The signatories exposed that these families had already paid 500 pesos and then 1,000 pesos fines, which were supposed to grant them the right to legalize their homes.

Also recently, Housing officials from Old Havana gave a new eviction ultimatum to six mothers and 12 children who had occupied eight months ago an abandoned premise located at Inquisidor # 405.

“The government is supposed to be trying to stop Covid-19 from spreading, but they want to evict us with the children. They do not care that the minors and pregnant women here can catch it, ” said Dayana Despaigne. Reina Sierra Duvergel said on her part that she has nowhere to go: “My house burned down, when it rains the wooden beams get drenched, so most likely it will collapse at any moment. Where am I going to go? ”.

In El Cotorro, Havana, municipal bureaucrats intend to evict some 1,000 people who built with their efforts a community in the old yard of the Antillana de Acero steel plant. They are mostly people from Cuba’s eastern provinces who were taken to Havana to work and were promised that they would have a home there, something that was never fulfilled.

The irony with these violent police actions against humble citizens is that, at the same time that they left those single mothers homeless again, this year’s official statistics are showing a reduction in the number of marginal homes in the country. The unsuspecting will attribute it to the construction and delivery of new homes by the State when in reality the government’s “achievement” has been an increase in the number of homeless Cubans.

Generally speaking, Cuba’s housing crisis worsens by day. The island began 2020 with an official deficit of 929,695 homes, but respected economists say it exceeds 1.3 million. Hundreds of thousands of families don’t have anything one could call a house and live crowded in tenement and single-room dwellings, collective shelters, buildings on the verge of collapse, or marginal neighborhoods known as “Llega-y-pon (Come-and Build). It may sound outrageous, but in 2020 some 600,000 people survive in slums in Cuba, many more than in other Latin American nations as compared to the total population.

1,000 homes collapse in Havana each year

More than 65% of Cuba’s real estate properties are in poor condition, many on the verge of collapse, something that, by the way, happens every day. In Havana, three homes per day collapse on average, about 1,000 a year, according to an official report. A most dramatic case happened in January 2020 when three school girls, between 11 and 12 years old, were crushed by a collapsed balcony in Old Havana and died.

The worst thing here is the laziness of the dictatorial leaders, all of them living in fully-equipped, luxurious mansions, who in the midst of one of the worst global pandemics ever throw families with children into the streets. Another crime that goes to the criminal record of Castroism.