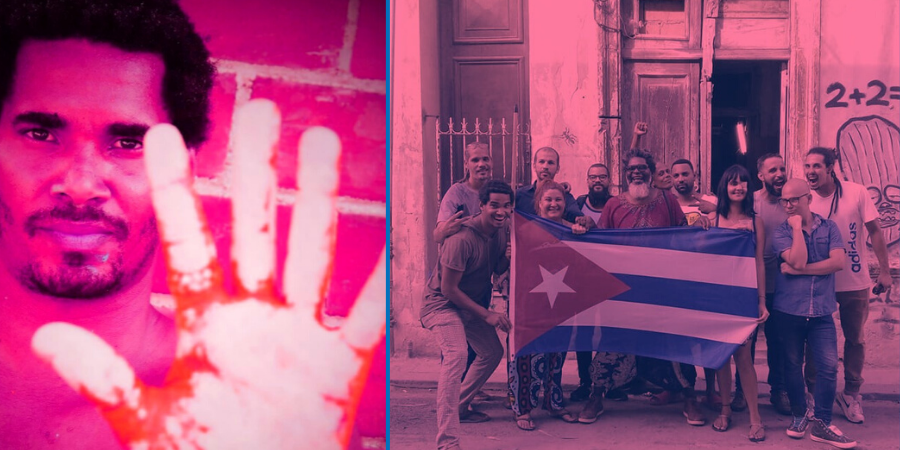 From last year’s gay march to the protest of the self-employed, it is obvious that, in Cuba, citizens are waking up from their induced lethargy.

The Cuban dictators didn’t release Luis Manuel Otero Alcántara. In fact, they freed themselves from him. At least, that’s what they’re trying to do now, by opening the gate of the cell where they thought they had isolated and silenced him. Yet the voice of Luis Manuel got multiplied into those of thousands who condemned the barbarianism of persecuting his voice, his art, his dignity. He was never better accompanied.

In a matter of hours Luisma, as his old and new friends call him, had cornered them from his cell.

They underestimated him. Wasn’t he a black, poor artist who was arrested as he intended to take part in a kissing demonstration to protest the latest act of official homophobia? That’s what they thought. “Who would come to defend someone like that?”, they assumed. “Death to culture and to otherness!”, they shouted. But this time the silence became thunderous. And they began to feel isolated even by those who apparently recognized – finally! – that, if today they came for Luisma, they could well come for them tomorrow.

The whole Cuban society mirrored in this shocking abuse of the police State against a simple citizen. Inside and outside the Island, quite a few of those who ─even now─ keep searching for words to justify their silence, felt uncomfortable with their complicity. It was simply too much. This time they could not blame Washington for such an outrage against a resident of the humble Old Havana San Isidro neighborhood. The so-called “revolution of the humble, by the humble and for the humble” had dropped its last fig leaf.

Luisma’s performance laid them bare. He forced them to show both Cuban society and the whole world their mafia-like and totalitarian essence. Luis Manuel’s serene smile disarmed them. Their handguns and police sticks proved worthless against him. During early morning hours, the regime’s minions, those gangsters who feel powerful inside their police stations and patrol cars, had to take him back to his friends, to his people. A people that is just beginning to discover its strength.

From last year’s gay march ─ the indisputable vanguard of this national wave of unsubmissive dignity ─ to the recent protest by the self-employed in central Cuba’s Santa Clara, it becomes increasingly obvious that the citizens are waking up from their induced lethargy and saying NO to the prospect of staying helplessly on their  knees.

Homeless families who occupy abandoned State-owned buildings; residents who block Old Town streets demanding restoration of the water service; neighbors who protest against government procrastination in the face of all-out environmental filthiness; filmmakers who withdraw from official competitions in solidarity with censored colleagues; academics who become fed up with being invited to discuss only what the honchos consider appropriate, where they deem is appropriate and in the way they deem is appropriate. Even exiles who discover the future negotiating power of their financial and human capital! As a famous Castroist barricade speech read, “This massive humankind has said ‘Enough!’ and started to walk.”

Luisma’s unsubmissive dignity has reminded everyone that the changes that the Cuban people need can indeed be achieved, and that, to achieve them, they don’t need authorization from the power elite.

It is without them, despite them, that change is already underway. The first thing that needed to change was the passive resignation of the citizens. That is already happening, thanks, among others, to self-respectful and unsubmissive artists such as Luis Manuel Otero Alcántara.