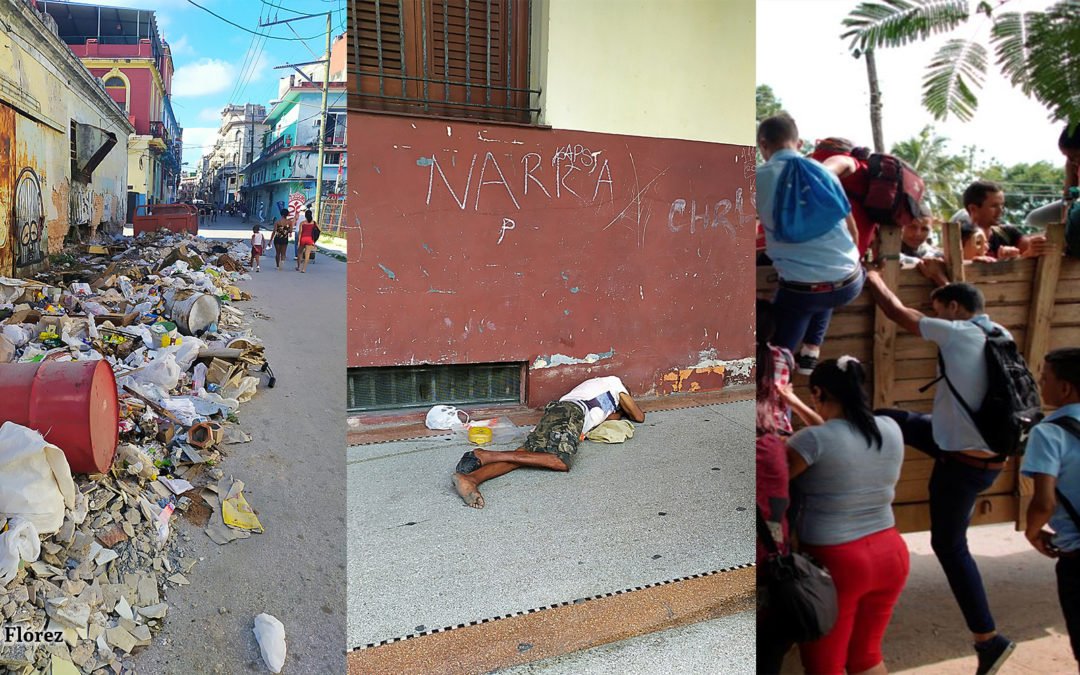 Perhaps the Castro regime’s biggest lie in recent years has been the “temporary crossroads” explanation they are giving to the crisis that shakes the nation, including the distortion and/or concoction of data and statistics to support it.

Still, thanks to the comprehensive research of the renowned Cuban-American economist Carmelo Mesa-Lago, some of the real statistics are out in the open.

If in 2013 Venezuela was able to deliver 105,000 barrels of oil per day to Cuba, in 2019 it barely reaches 40,000 bpd, a 62% drop that Cuba cannot cover with fuel from other markets, because it does not have enough hard currency and no one is lending them a penny (they are not even paying interest on the commercial credits they owe).

On the other hand, Caracas faces two major roadblocks to make up with the Castro regime: first, the recent U.S. sanctions against the shipping companies and tankers transporting oil to Cuba; number two, the unstoppable decline of its oil production. From an output of 3.5 million barrels per day in 1998, it now produces about 700,000 bpd. And the experts forecast it will keep falling.

For the longest time, the Cuban economy has been a parasitic one: it cannot support itself and in recent years it required about $22 billion annually – not counting Venezuela’s oil deliveries – just to maintain afloat the Cubans’ precarious living standard.

The island has four main (known) sources of hard currency: the exploitation of Cuban doctors abroad; tourism; remittances, and exports of goods. Except for the remittances, the rest are declining dangerously.

Gross tourism revenue, according to Cuba’s official sources, fell 9% in 2018.  And it is estimated that with the U.S. ban on cruise travel to the island, it will further decline by the end of the year to $980 million. That’s only in terms of gross revenue. Speaking in net terms, tourism contributes only 35% of what it musters, as 65 cents of every dollar received goes to import what keeps the industry running.  On top of this, the flow of European visitors is also falling.  In the first half of 2019, six out of every ten hotel rooms on the island stayed vacant. Call it a major disaster.

The lion’s share taken by the Cuban State from the salaries of its doctors working abroad fell by $8 billion between 2013 and 2017, mainly due to the economic crisis in Venezuela. And now a new setback must be added, after the repatriation of 8,000 Cuban doctors from Brazil by the end of 2018.

Remittances reached $3,692 million in 2018, but, at least from the U.S., they are expected to further decline in 2019, due to the recently applied limit of $1,000 quarterly per person. By the way, that amounts to $333 per month, which is equal to seven times Cuba’s average monthly wage.

Exports of goods, which in 2018 totaled $2,406 million, will keep falling as well. This year the sugar harvest output was five times shorter than in 1925, and they even had to import some quantities of the sweetener.

So in 2019 the country’s main sources of hard currency are unlikely to reach $12 billion altogether. Much less because the government cannot forfeit importing food, medicines, raw materials, equipment and consumer products. Cuba produces so little that a lethal vicious cycle goes on and on: almost everything must be imported, but the country cannot generate enough money to pay for it.

Such a dramatic overview is anything but due to a “temporary crossroads”. The crisis is structural in nature.  To put it in a nutshell, the Cuban economy cannot survive without subsidies and free oil.   And the dictators already ran out of lifelines to rescue them. This time around, the dreaded “special period II” might be terminal. The Stalinist model is bleeding to death.  The Raúl Castro-Díaz-Canel duet knows it well, so they should not keep lying and procrastinating. Either they open their fist, or the Cuban society will start to revert to the Middle Ages.