Reform or Violence? 25 years after the “Maleconazo” 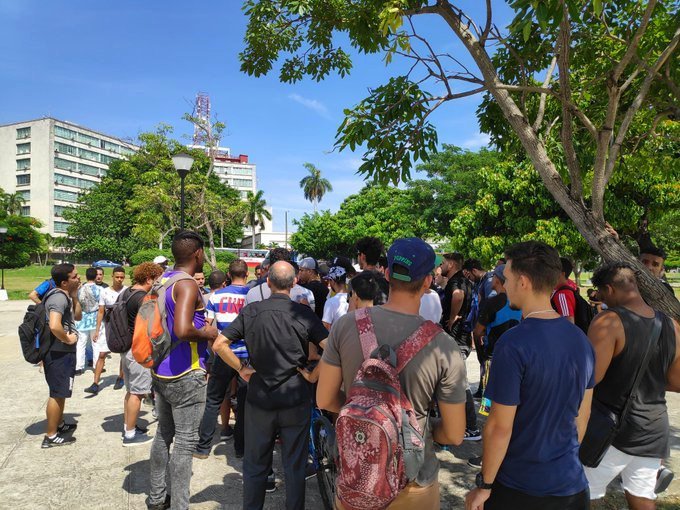 Since the beginning of 2019 Cuban officials have been facing dozens of protests of economic and social nature. In almost all of them, they somehow gave in. This year’s areas of sore conflict throughout the island included transportation, housing, public health, shortages, insufficient salaries, as well as restrictions on artistic freedom and free internet access.

Not that these are new issues of popular complaint. What is new is that more and more citizens are willing to voice that they will no longer take promises or refusals as an answer to their demands. As it faced this unfamiliar attitude, the government has been granting one-off concessions here and there.

The idea that the more the people press officials the worse they will react is a myth concocted by the Cuban government. They know there are some red lines to it. The 1994 “Maleconazo” massive protest, to cite one example, forced them to open up their borders, reopen peasant private markets and give some space to self-employment.

With the “Maleconazo” they took an unexpected reality check. It shook them up, and it has been their recurrent nightmare ever since. That’s why they may vociferate, threaten, issue new repressive decrees… but give in when faced with citizen’s determination.

In one recent example, despite threats to withdraw their licenses and confiscate their vehicles, State officials in Santiago de Cuba were unable to appease private truckers who started a strike – that’s what it was, no matter how they called it. Instead, they ended up granting them a significant part of their demands regarding affordable fuel prices and adequate ride fees.

The Cuban Observatory of Conflicts (OCC) has been recording a meticulous log on nearly two dozen very diverse situations in which citizens finally pushed the State back with their demands. Previously, they had surrendered to appeasement tactics, police threats and repression. Residents of unauthorized homes that were marked for eviction and demolition; neighbors who for decades protested in vain over polluted ditches and overflowing cesspools; villagers who demanded the reconstruction of the only bus stop kiosk in their hamlet, they all won their cases by resorting to methods of non-violent civic resistance.

Cubans are learning that their power lies in a combination of the number of people that can be mobilized in an organized way and the information about their issues they get to upload on social media.  Social networks are the new virtual civic square from which the abuses are reported and, at the same time, the coordination office for the mobilizations that take place in the real world. The odds of success are enhanced by catching some knowledge of negotiating techniques and a firm decision to reject vague or negative promises that use the United States as the culprit for the problems not being solved.

The government’s only rational way to stabilize its national governance would be to lift the internal blockade that paralyzes the nation’s productive forces.

Lifting the internal blockade entails, among other possible measures, phasing out the agricultural bulking system known as Acopio; handing over property rights to those who work the land; loosen private sector prices; granting tax exemptions to those businesses that create jobs, goods and services; abolish the State monopoly on domestic and foreign trade; cancel customs tariffs on goods, supplies and tools intended for the domestic private sector; and allow Cubans ─whether or not they live on the island─ to invest in any sector of the economy. And, yes, they will have to open up Cuban society by lifting the obstacles so far imposed on the local development of the internet and Web connectivity.

Initiatives such as SNet, (or Street Net) a community network using wired and wireless technologies, are safeguarded in many countries by laws that protect them and promote their development for the common welfare. An international study from the University of Michigan found that Cuba’s SNet was the largest autonomous network worldwide without Web access. Something to admire and incentivize. But the Cuban government is still lost in its labyrinth and decided instead to shut it down with a decree.

Apparently, things will have to get much worse for the power elite to understand that “those at the bottom” are no longer willing to be governed as before. For now, it seems more inclined to “legalize” oppression with new decrees than to recognize rights and new freedoms.

Among them, some still believe they can control everything by way of prohibitions and repression. Others presume that, as Cubans use to say, “the oven is not ready for biscuits” anymore. Their problem is that under today’s national and international circumstances, they may know how the violence they can unleash would start, but not how it will end or who will be crushed in the process.

They should be pondering that Venezuela’s regime can no longer sustain them and that Raul Castro is inexorably approaching its final hour. As of now, they don’t seem to be very thoughtful, though. Not yet. Not until reality shakes them up again, perhaps much worse than it did in August 1994.