The internal blockade: “You keep squeezing people and they will get tired.” 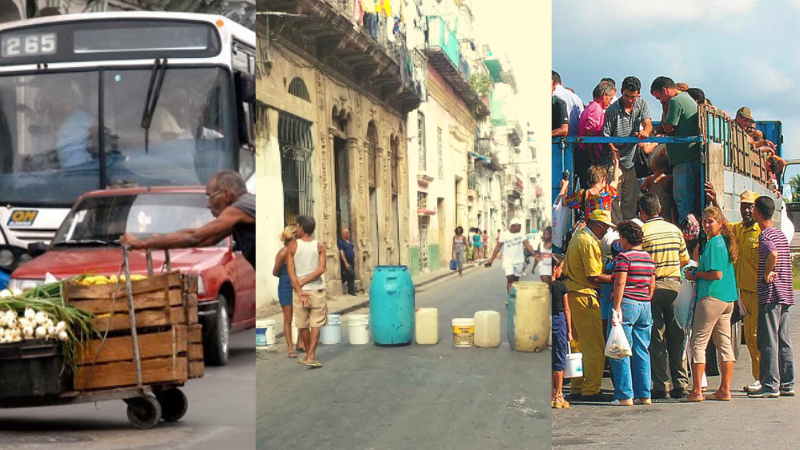 Last week, actor Luis Silva, who plays the character of Pánfilo in “Vivir del Cuento” (a widely acclaimed Cuban TV satirical show), lost his temper on Facebook, as he reacted to a rumor saying that, beginning in September, Cubans would no longer be allowed to pay with regular CUP Cuban pesos the customs tariffs on their first import of goods of the year. For all others, you have to pay a similar amount of costly CUC convertible pesos (1 CUC=25 CUP).

Although the rumor apparently never came true, just the sight of another setback made Silva’s blood boil. He claimed on the social network: “I need some Cuban Official Media to tell me that these rumors are not true. Or is it time already for a new turn of screw on the internal blockade?”

Then he added: “No one has to take these imports away. They will vanish on their own the day things are sold in stores at reasonable prices.”

(For those who are not familiar with him, in March 2016 Silva and the rest of the cast of “Vivir del Cuento” welcomed former U.S. President Barack Obama to Cuba in the set of the show).

Readers should be reminded that these so-called “imports” refer to anything Cubans authorized to travel – others are “regulated” and prevented from doing so – can bring to the country through the airport, as part of their luggage. In fact, in Cuba commercial imports and exports are a prerogative of the State: not even the private sector’s microbusinesses are allowed to conduct such indispensable activities. In order to ensure the inputs for their businesses, local entrepreneurs must hire people authorized to travel and send them to buy them to the free zone of Colon in Panama, the flea markets of Mexico or Haiti, and even to Moscow, and then pay the high Customs “luggage” tariffs.

But this is just one of the myriad of prohibitions that make up “the internal blockade”, a complex and absurd entanglement of legal restrictions dictated by the regime that hinder the lives of Cubans and has been so-called since the 90’s by political opponents and independent communicators, in opposition to the American embargo, which the Cuban Government calls “the blockade”.

Silva, who has been voicing lately the feelings of ordinary Cubans on social networks, used the term shortly after Cuba’s current Communist ruler Miguel Diaz-Canel, mentioned in a speech “what some use to call ‘the internal blockade’”.

As stated in a communique by the Foundation for Human Rights in Cuba, these obstacles act as “internal State barriers to the citizen’s talent and initiatives.” Its cessation “would result in a very short time in the people’s welfare, through the creation of jobs and increased production of goods, products and services.”

In the allegedly “reformist” times of Mr. Díaz-Canel, the internal blockade has been no less than in those of his predecessors, Fidel and Raúl Castro. Moreover, it has been systematically tightened: with executive order # 349 of 2018, signed by Díaz-Canel, new prohibitions against a free artistic creation have been created, as well as others against free expression, information and press through executive order 370 of 2018. The latter was recently published in Cuba’s Official Gazette and promises to harass with high fines those who host “a website in servers located in a foreign country.”

For everything to remain unchanged, the regime needs to control Cuba’s national life with this intricate web of prohibitions, which provide a “legal” pretext for them to take to the courts those who dare to dissent or revolt.

In his recent post on Facebook Silva mentioned one of those countless legal obstacles that make life so  for Cubans: the collection of a $400 tariff to a relative who imported for his “almendrón” (Cubans nickname for 1950’s American cars) “parts that the State does not sell or manufacture.”

As the author says, those parts “will result in better brakes, fewer gas emissions, better car suspension, fuel savings, and fewer accidents. So many meetings and nobody analyzes this?” Then he reflected: “Everyone who wants to bring over parts should be allowed to do so. But no. They only think about this in terms of preventing people from doing business with the parts.”

Yet the alternative to lifting “the internal blockade” might well be this conclusive warning the popular Pánfilo gave in his post: “You keep squeezing people and they will get tired”. And the day that happens may explode because nobody can escape on a raft.