A new type of protest: #BajenLosPreciosDeInternet 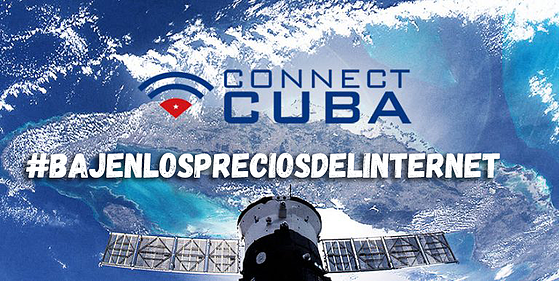 When the only Internet access points in Cuba were still some closely monitored navigation rooms, the State Telecommunications Company of Cuba, ETECSA, already had plans to gradually expand its censored service (through wi-fi points, smartphones and home connections). Not because the government suddenly healed from its allergy to freedom of information; not even because they were aware that Cuba was lagging behind in all aspects vis-a-vis the connected world; but because they had done their math in terms of convertible currency. They came to a conclusion: the government needed more money … and it could be charged to the Cubans “traitor” relatives in Miami.

So having these Cubans deprived of rights and their “vermin” family members as a target, they started a promising business by charging them astronomical, monopolistic fees for Internet access. Recent data shows that there are already 5,4 million cell phones on the island, and 1.8 million of those are already connected to the Web through mobile data, an option that became available less than a year ago, at the end of 2018. Definitely a booming State business in a country where the client is never right.

“According to @ETECSA_Cuba, the pension of an elderly person is worth 600MB of Internet (current fee: 7 CUC, or 175 pesos); the minimum wage in Cuba is worth 1 GB (10 CUC, 250 pesos); the salary of a specialized technician or a university graduate is worth 2.5 GB (20 CUC, 500 pesos); the salary of a professor at CUJAE (the University of Havana’s School of Technology) is worth 4 GB (30 CUC, 750 pesos)” This tweet  by Bely Rodriguez Morales, a doctor in Mathematics, got many Likes during a recent cyber-demonstration against ETECSA’s  onerous prices . Indeed, how come a Cuban can only buy 1 GB of data with Cuba´s minimum wage while even a Haitian can buy 154 GB with the minimum wage of the poorest country in the Americas?

It was such unconscionable commercial practice what triggered the protests that in the last two weeks convened more than one thousand Cuban twitterers on Cyberspace under the hashtag #BajenLosPreciosDeInternet, (Lower the prices of the Internet). The “Tuitazos” soon became Trending Topics in the social network.

Not a hint thus far, however, that ETECSA officials would be willing to address the grievance. Probably  because in recent months the government  lost several key sources of foreign currency. So Cuba’s historical (and hysterical) leaders are now ready to repress at any rate the restive millions of customers fed up with paying abusive fees while the cost of living keeps getting higher.

In order to try to stop the protest dead in its tracks, they resorted to the old intimidating trick of portraying it as imperialist aggression and calling the participants “mercenaries”. In so doing they resorted to a traditional scapegoat: the legendary “dangerous mercenary” Yoani Sánchez, who took part  in the “Tuitazo” just as another regular Internet user, was earmarked as the alleged leader.

The not-so-subliminal message was: “Whoever dares to protest the prices of the service is putting at risk the security of the State, which amounts to pay counterrevolutionary service to Trump and the Helms- Burton Act, and as such they will be treated”. One compelling detail is that Law 88 (known as the Gag Law and recently used as a threat by the president of Cuba’s Supreme Court ) contemplates up to the death penalty for “collaborating with the enemy” on the application of Helms-Burton.

The truth, however, is not so hard to grasp. The fact that there are hundreds of Cubans demanding a change in the prices of the Internet service should not be answered with a state campaign of threats, hatred and assassination of reputations, but by ETECSA’s Customer Service department.

It is within this delicate context that Mayra Averich, the president of ETECSA, chose to evade her administrative responsibility to give a commercial solution to the protests, and assumed instead the police-state narrative that her company is facing imperialist aggression headed by Yoani.

That is not just a lie; neither it is a threat against the blogger alone. It is, in fact, an incitement to hatred and violence against all those who dare to protest. That is why Arevich and others connected to this plot have been included by the Foundation for Human Rights in Cuba in its database of Violent Repressors. They went beyond the limits of a nonviolent administrative repressor. They stopped acting as ideologues and managers to publicly and voluntarily assume the role of promoters of violence: “people who in exchange for money or privileges obey unacceptable orders”.

We wanted to make this clear again: if any victims result from this artificially-generated hysteria, amidst the rarefied atmosphere that prevails today on the island, not only those who on their own assaulted peaceful citizens will be responsible, but also those who previously incited, encouraged and propitiated an atmosphere prone to unleash violence.

Opening a file as a violent repressor to those who today promote hate campaigns on the island is a precautionary measure to make them aware of the seriousness of their actions, so that they immediately quit doing so. They should know that their abuses involve individual responsibilities that do not prescribe over time.

What the regime really fears are these ever more frequent, unforeseeable protests. The promoters in the past century of the authoritarian “new type of Leninist party” now face the “new type of protests” of the digital era:  spontaneous, horizontal, swarming, far-reaching and with no visible leaders.

In Cuba, the Ministry of the Interior of the 21st century increasingly faces a situation similar to that narrated by 17th-century playwright Lope de Vega in one of his masterpiece works of Spanish literature. In the legal case on the assassination of an abusive official in the town of Fuenteovejuna, the question of “who killed the Commander?” was posed to all the defendants. They answered unanimously: “Fuenteovejuna did it, Sir, all at once.”

Centuries later, those questioned about who launched these protests with no visible leader could assert: “The Internet did it, comrade officer, all at once”.