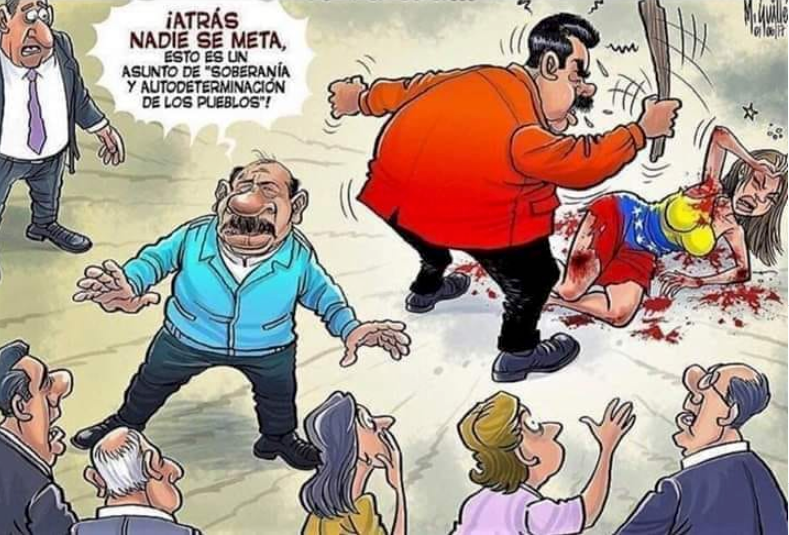 Secretary of State Mike Pompeo revealed in an interview with CNN that in the most recent crisis in Venezuela the Venezuelan dictator “had a plane on the runway, and was ready to go” to Cuba, but “the Russians told him he should stay”.  Maduro did not appear on TV during the day.

Interim President Juan Guaidó had obviously been given assurances that the military, up to the level of Defense Minister Gen. Vladimir Padrino , would support the Maduro’s departure. But Padrino later that day appeared on state television with most of his top brass, condemning the “mediocre attempt at a coup d’etat.”

While saying that all options are on the table, the United States has done its best to seek a bloodless solution to the Venezuelan crisis. But Washington is aware that the South American country has become under Chavismo a base too close to its territory for its worst enemies:  Iran, Russia, China, Cuba, Hezbollah, FARC and ELN.

Of all, however, they know that the Cubans have the greatest responsibility for what is going on in that country.  Wolf Blitzer with the CNN network, asked Mike Pompeo last week: “Who’s been worse from the U.S. perspective in preventing Maduro from leaving? The – you’re calling them the Cuban thugs, who are on the ground over there in Caracas and elsewhere, or the Russians?”

“ The Cubans are the ones that are the deepest”, said Pompeo, “(they) have been there the longest, have the most direct relationship, are closest to the protection that is being provided to Maduro, and so they are at the center of this malfeasance.”

The head of American diplomacy said nonetheless that, although the United States does not rule out military intervention, it continues “”working to make sure that doesn’t need to be the case, that we deliver this outcome for the Venezuelan people in a way that doesn’t put life and limb at risk, and there’s not violence”.

Blitzer then asked: “How violent does it have to get before the U.S. does unleash a military option?”

Millions of hunger-stricken, oppressed Venezuelans, as well as observers of that country’s reality are asking themselves the same question.

More than the Russians, Nicolás Maduro is still in power because of the Cubans, who have been there for 20 years.  This was acknowledged by former Spanish president Felipe Gonzalez, an enemy of the military option himself, in a recent interview with the Argentine daily Clarín.

“Russia will not back Venezuela forever,” Gonzalez said , but “Cuba has no choice” because for Havana it  “is a matter of survival. ”

And although Pompeo and President Donald Trump himself have anticipated that Washington will continue to raise the cost of Cuban intervention, including the possibility of “a total and complete embargo”, Raúl Castro and his courtiers ─as long as their refrigerators remain full and their privileges intact─ do not care much for the Cuban people to eat cats and banana peels again, or endure long blackouts as they did during the so-called ─post-Soviet─ special period

There is an old Cuban saying that pictures the resilience of the macao, a species of crab native to the island which, because of its vulnerability, takes refuge in other creatures house, like a seashell, from which you can’t take it out except by giving it fire.

Every day it becomes more obvious that in order to uproot the Cubans’ military intervention in Venezuela * no “option” will work except the macao treatment:  give them fire.

* (See on the FHRC website “Cubazuela; Chronicle of a Cuban intervention”)

Cubazuela: Chronicle of a Cuban Intervention