Cuba’s  food crisis: not only the Venezuela factor and a lack of foreign currency 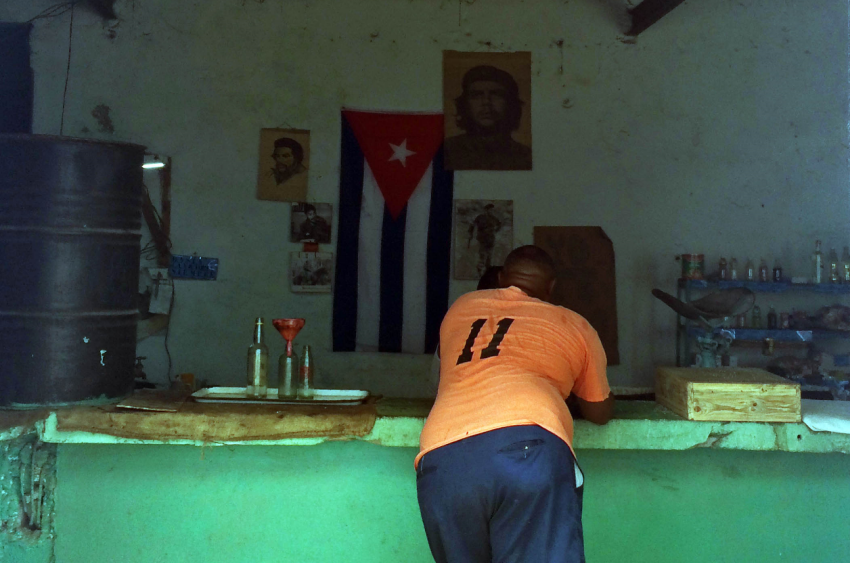 At a time that could not be worse for Cuban leader Miguel Diaz-Canel, a photo was recently leaked to social media, portraying an apparent family  dinner in which, by dessert time, bottles and glasses of wine, as well as several serving trays with leftovers are seen on the table.

The snapshot has provoked acid comments among Cubans, not because it reveals a sumptuous or sybaritic fest, but because it points to the uneven and unfair “law of the funnel”  ─ wide for them, narrow for us─ at a moment when ordinary Cubans go through an aggravation of the chronic conflict opposing the food needs of the population and the inability of the communist government to provide it.

The growing shortage of basic foodstuffs such as eggs, chicken, flour and cooking oil is affecting even those who ─like private entrepreneurs and people receiving family remittances from abroad─ can pay at the so-called Foreign Currency Collection Stores (TRD).prices closer to the average purchasing power of New York or Paris than to that of Havana or Santiago de Cuba.

We must remember that, according to official figures, it was only last year that the average salary on the island reached for the first time $30 per month, a figure that ─the government itself recognizes─ Cubans have to supplement just to buy basic foodstuffs, not to mention other indispensable needs.

Some media outlets such as CiberCuba recently posted pictures of the long lines Cubans are making at the TRDs when some quantities ─always insufficient─ appear of the staples “in shortage”. Other media such as Diario de Cuba, described the tense environment that characterize the lines: “I waited three hours in line for the cooking oil to be released to customers and, when the employees finally showed up in a vehicle , the line got disbanded  and a human  stampede followed suit. Men ran over women and did not care that several elderly ladies fell to the floor, they did not even help them get up.”

Official explanations tend to revolve around “financial tensions” and problems in Venezuela, and they are partially right: ever since the rise to power of Hugo Chávez the “brotherly” country became the replacement “sugar daddy” of the disgraced Soviet Union that supported for decades the parasitic economy of the island. But with the Venezuelan oil production closer to go below the mark of one million barrels per day, shipments of subsidized crude to the island have dropped (which implies that Cuba must buy it at market prices) as also has the income generated by Havana’s exports of professional services, which for many years have been the Island’s primary source of hard currency.

Still, Cubans are well aware that there is no decent reason for their country to continue importing more than $ 2 billion in food every year, or to depend on the ups and downs of the financial situation to put food on the tables.

Although a large chunk of Cuba’s agricultural land was abandoned to the growth of a pervasive thorn bush known as marabú, wherever the land is still plowable it is the private producers who continue to contribute the largest amounts and best quality of food to Cuban homes.

While Raúl Castro declared years ago that the food problem in Cuba is a national security issue, and he distributed thousands of acres of state land to private producers since 2010, he did not give them rights of property, and imposed too many restrictions, beginning with dictating  the types of crops they must grow and the prices they have to sell them at, as well as requiring them to sell 80% of the harvest to the inefficient State stockpile mechanism of Acopios that, according to some serious studies, leaves about 60% of the crops to rotten in the fields.

With its policy of Doi Moi (economic renewal) Vietnam, a communist country, allowed farmers to bring all of their agricultural output  to the market and even though their lands are still officialy State property, they have rights of “exchange, transfer, inheritance, lease, and mortgage” of their leased land. Today the Southeast Asian country is not only food self-sufficient, but it is also the world’s number 2 exporter of rice, as well as of coffee, a crop they learned to grow from… the Cubans.

Meanwhile, Cubans on the island continue today ─and who knows how much longer─, drinking  a ludicrous “cafecito” mixed with powdered roasted peas. And making long, long lines for food staples that real economic freedom would encourage to produce and distribute in Cuba, or otherwise be bought with no sweat in the international markets. Without so many, and so chronic “financial tensions”.