HOW TO CONCOCT A “NEW” COMMUNIST CONSTITUTION. 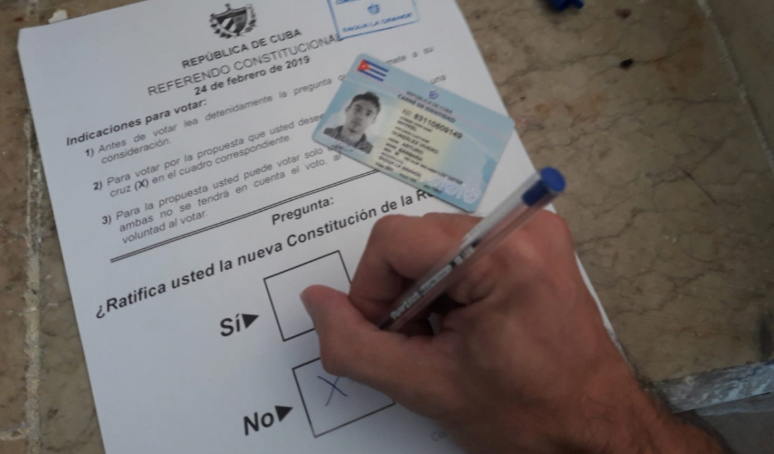 After six decades in power, the government of Cuba has become an expert in disguising everything arbitrary as “legal”. It does not matter if to achieve that goal they resort to means such as arbitrariness itself, rampant illegality or fraud. After all, one of the favorite readings of Fidel Castro, the founder of Castroism, was “The Prince” by Niccolò Machiavelli.

The true value of the referendum convened last Sunday by the authorities on the island in order to have a “new Constitution” approved was not the usual and expected approval itself but the disclosure, even according to official figures, that 2,482,108 voters, or 26,69 %, in some way (abstention, voting against and voided ballots) rejected it, the highest figure in one of these histrionic political shows since 2003. (Data obtained by FHRC from unofficial sources indicate much higher opposition margins).Those who dared to express their disagreement, in a police state that represses and intimidates political dissent, faced a web of tricks and irregularities that many Cubans see as part of the national mechanics, but that in any representative democracy would have been denounced as fraud

The “new” Cuban Constitution began promising change and ended with more of the same: consecrating again the Communist Party as the “supreme leading force” of society, and the only legal one; ratifying the irrevocability of socialism and the political conditioning of any exercise of basic freedoms; and tying even tighter any possibility of a genuine (and urgent) liberation of the country´s productive forces. The government chosen by Raúl Castro to perpetuate his and his brother’s 60-year old regime needed a new Magna Carta to give the impression that Cuba is changing, as well as to cover its unchanged arbitrariness with a mantle of “new legality”. No matter that, to pursue these goals, it did not hesitate to apply the Machiavellian tenet that “the end justifies the means”. Or that its victory ended being a Pyrrhic, backfiring one.