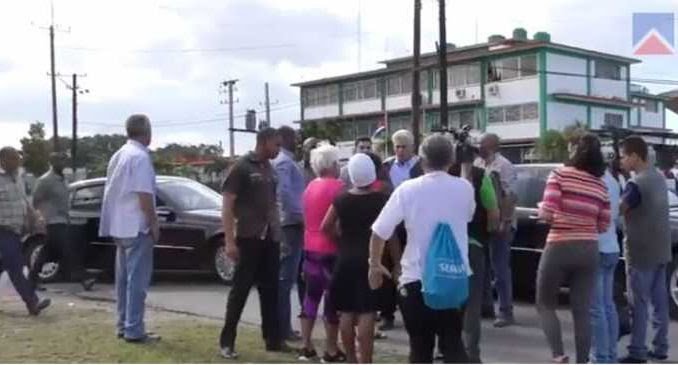 The release of a video showing a caravan of high officials escaping the indignant fury of the residents of Regla, a municipality in Havana, is marking a “before and after” in the psychological domination of the populace.

The villagers had very good reasons to clearly see the demagogy of the “distinguished visitors”.  Their dwellings and personal property were damaged by a powerful tornado and the government presided over by Miguel Diaz Canel, came up with only two initiatives. One was to sell meager rations of food to the victims – who even lost their wallets in the ruins of their homes. The other, extremely irritating, was to block the spontaneous distribution of free donations by private restaurants and from other Havana neighborhoods.

In Cuba there are precedents of irate citizens protesting in the streets. The insubordination of the residents of the town El Cano in the sixties or the “maleconazo” in the nineties, are just two examples of a long list of incidents that have occurred throughout the island in the past sixty years and that were always brutally suppressed each occasion. But what happened this time, although not of a similar magnitude, has a high symbolic value at this juncture.

The worst thing about this incident for the Cuban regime is that the reglanos have delivered a deadly blow to the main pillar of the regime: the false premise, widely shared, that citizens can not face power. That the only thing they can do is to present their complaints and claims respectfully, individually, submissively and bureaucratically. That is the essence of the demobilizing idea –quietly disseminated by the governing elite- that “there is no one capable to overthrow the regime, nor anyone capable of fixing it”

Few times the Castro dictatorship had had a national and international scenario as adverse as the one they now face. His overseas patron, the police regime of Maduro, is going through a terminal crisis.

The economic, social and psychological impact in Cuba of a Venezuela collapse is difficult to calculate.

But it is not easy to underestimate the psychological impact on the state of mind of the whole Cuban population of the insensitivity, ineptitude, demagoguery and opportunism displayed by the authorities towards the victims of the tornado.

The flight of the official caravan to escape the irate masses is a clear warning to skeptics.

People have discovered that what seemed “impossible” turns out not to be so. It is possible to transform personal quiet complaints into open collective demands and protests. The regime is neither almighty, nor invincible.

The worst nightmare for Raúl Castro is to see Cubans adopting the slogan chanted today in the streets of Caracas: “¡Sí se puede!” (Yes we can!)  The reglanos have shown that this is possible.