Cuban myths promoted by PAHO and FAO are debunked and collapsing 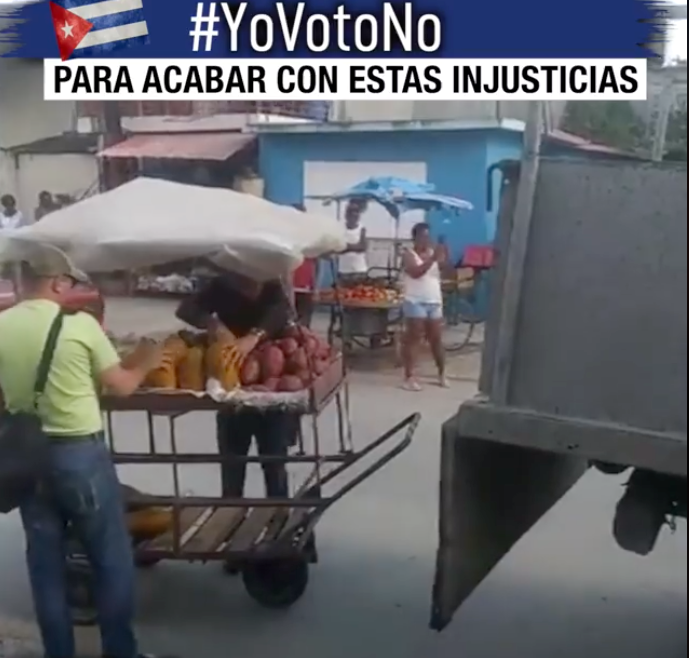 “Don’t take away the products, ,they’re starving us. This is the government of Diaz-Canel!” …so shouted indignantly the neighbors and passers-by when government and police forces tried to confiscate their loads of food, fruits and vegetables to a forklift truck in the district of Vista Alegre. In the video -the impunity of the henchmen in the streets is over- and it can be seen as the street vendors dump their products to the ground rather than have it expropriated.

This news on the one hand provides new evidence that Cubans are no longer impassive in the face of such abuses that affect everyone. On the other, Diaz-Canel, instead of taking steps to alleviate the food crisis, worsens it by responding with more repression and bureaucratic controls to a situation that calls for a profound restructuring of the economy and society.

But it was not only the incident regarding the confiscated food to the neighbors of Vista Alegre. In Havana, with more than two million inhabitants, the inspections of vehicles that enter the city have increased to reduce the arrival of food products to the “informal” market, which is precisely what mostly feeds the residents of Havana.

The year 2019 has begun with such an acute shortage of food throughout the island that many Cubans are already foreseeing in the horizon another so-called “special period in times of peace”. They have returned to certain unprecedented culinary recipes of the 90s, an era in which some people even invented a “grapefruit steak”.

The production of eggs, pork, beef, chicken, milk and fish has collapsed. Bread is missing. The leaders are blind to the non-viability of socialism, which blocks Cuban productive forces by banning free markets production. The country exports very little and has no money to import. And since Caracas has its own crisis and cannot keep its subsidies at the same level, the regime in 2018 only imported 30,000 tons of flour and wheat, instead of the 70,000 that were required as a minimum.

There is less animal feed available, which explains the shortage of pork meat. The independent digital journal in Cuba, “14yMedio”, reported that in a market on San Rafael Street, in Havana, the pound of pork meat has been sold at 60 Cuban pesos, which is the equivalent to a three-day salary for an engineer. Of the average 28 million per month eggs consumption in Havana, only 5 million arrived to the markets last December.

The Ministry of Public Health recommends that the country’s agriculture should provide, per person, at least 30 pounds of root vegetables, grains, and fresh fruits every month, to be properly fed. But it turns out that Castro’s agriculture after 60 years of socialism still does not reach 17 pounds per capita.

What is truly amazing is the disconnect between the corrupt and insensitive nomenklatura that runs the country and the rest of Cuban society.Under these circumstances, it is pertinent to recall the outrageous collaboration of representatives of the United Nations Organization for Food and Agriculture (FAO) with the Castro propaganda to cover up for the many years of food debacle in Cuba.

The most disgusting aspect of this collaboration has been to present the Cuban food production system as an example for the region. But, unfortunately, FAO has not been the only UN branch to lend itself to such crooked game.

The Pan American Health Organization (PAHO), also attached to the United Nations, has been part of an active conspiracy since 2013 with the Brazilian governments of Lula and Dilma Rousseff and the Castro dictatorship to traffic Cuban health professionals to their own benefit. Today PAHO faces a multimillion-dollar compensation trial for that reason.