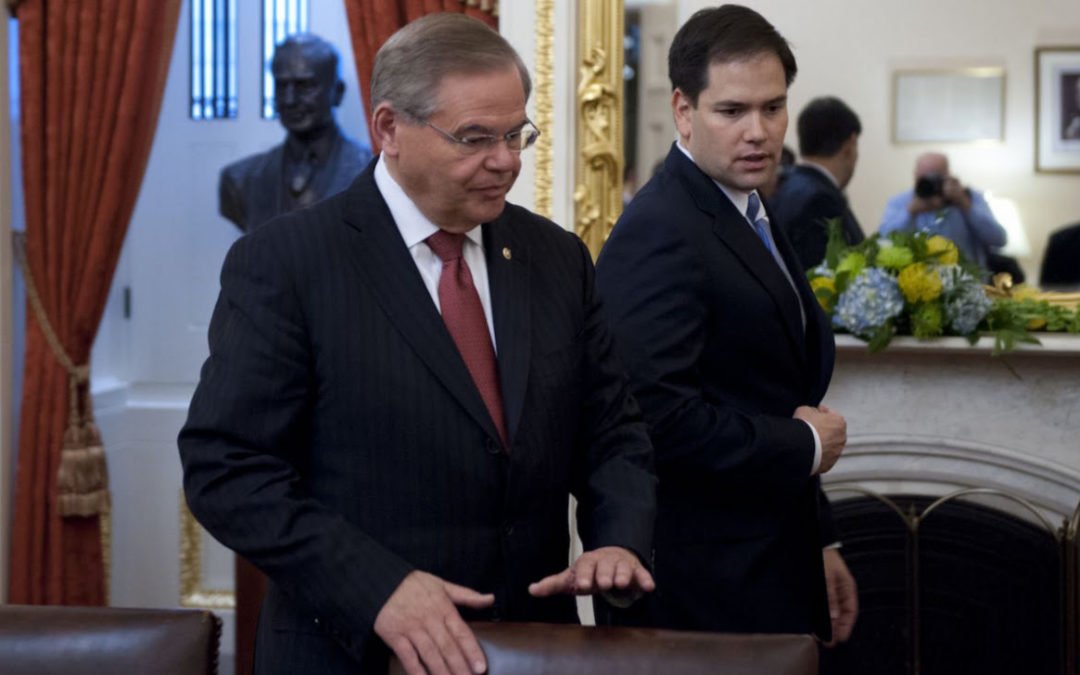 Last Thursday, January 10, Senators Marco Rubio (Republican / Florida) and Bob Menéndez (Democrat / New Jersey) jointly presented a bipartisan draft resolution denouncing the human trafficking of Cuban doctors. They also requested the restoration of the Cuban Medical Professionals Parole (CMPP), a refuge path for the doctors of the island who manage to escape from the missions to which they were sent abroad.

They supported their complaint with the revealing documentation obtained by the digital newspaper Diario de Cuba and the dossier compiled by the group of American lawyers that has filed a legal complaint for human trafficking against the Pan American Health Organization (PAHO) at a federal court in the United States.  PAHO is blamed for its participation in a conspiracy between  the Cuban government and the then government of Dilma Rousseff in Brazil, designed to implement, since 2013, this modern slavery scheme to bring Cuban professionals into that country,

The collective lawsuit against PAHO demands compensation from that institution, attached to the United Nations, in favor of those doctors who managed to escape this scheme and take refuge in the United States thanks to the Cuban Medical Professionals Parole (CMPP). This program was canceled by President Obama on January 12, 2017, a few days before transferring the presidency to Donald Trump on January 20 of that year. The resolution of the Senate now demands its restoration.

What was Havana’s reaction? To accuse the senators of promoting ” brains theft” against Cuba. Very interesting.

The concept of theft implies the existence of any private property from which its legitimate owner has been dispossessed by means of an illegal act. To whom do the “brains” and talents of Cuban citizens belongs to? To the totalitarian state or to the citizens themselves? In reality, the restoration of that program would offer a path for the recovery of brains and talents stolen by the Cuban state to its legitimate owners and not the other way around.  But that is not the dictatorship way of reasoning.

For decades the Cuban regime imported from the USSR modes of exploitation of citizen talent, and then hid behind myths and public rites aimed at legitimizing them.

The slave scheme of the Cuban government is expressed in the creation of commercial entities with a private appearance that act as intermediaries between any citizen and a company, institution, or government interested in contracting their services and ready to pay for them in convertible currencies. It does not matter if the work is done inside or outside the island. In the case of trafficking Cuban doctors with other countries that entity is the for profit Cuban Medical Services Trading Corporation, S.A. (CMS).

But it’s not just about the exploitation of doctors. Athletes, engineers, university professors or other experts are also rented by the Cuban regime through government institutions or entities that intend to be accepted as non-governmental, such as the Cuban Baseball Federation .

Within the island a similar situation occurs in the case of construction workers, accountants, drivers, gardeners, cooks, cleaning staff, and others who work for foreign companies.  Companies of the Cuban state – such as Almest and Acorec – act as intermediaries of the contracts and pay a minimum fraction – in Cuban pesos – of what they charge in foreign currency for their services to these companies.

Is there free education in Cuba or not?

The Cuban totalitarian regime sowed in the minds of the citizens the false premise that they had received “free” education from the state so each professional achievemnt had to be dedicate to Fidel Castro and his revolution. Their talent, therefore, was not the result of their personal effort and could not be considered private property of these people. Their brains and abilities, according to that perspective, are property of the communist state which is the only one that can authorize its lease or sale at its own convenience and whenever it can take advantage of that transaction.

That premise is not only abusive, but false. The first thing to keep in mind is that education in Cuba is not free. Since elementary school students have to carry out long days of “voluntary” work in state fields and factories. The second thing to keep in mind -if the criterion that these people should “compensate” the Cuban state for their studies is to be accepted- is that the Cuban government appropriated more than 70% of the nominal salary of these doctors. That would allow to pay, in only a few months, the full curricula of medicine studies in some of the best private universities in Brazil and other countries in which they have rendered services.

By accusing Senators Rubio and Menéndez of brain theft, the Cuban dictatorship has exposed itself. It is the Castro brothers who have stolen and sold the talent of Cubans for six decades.