SAVAGES AT THE UNITED NATIONS 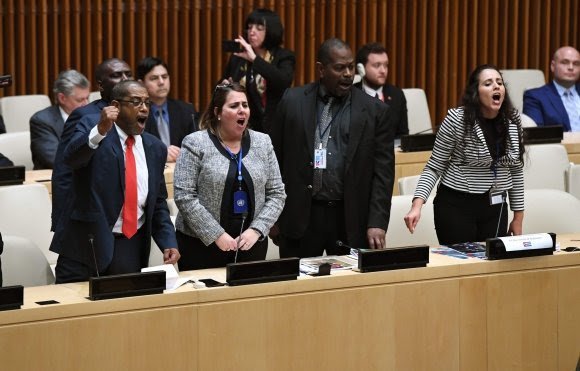 The unusual and disgusting spectacle performed, on October 13th, by diplomats of the Cuban Mission to the UN. This incident is unparalleled within the world’s top forum. The Castro gang tried to sabotage a working session, with deafening shouts and blows at the tables, because it was devoted to examining the situation of political prisoners in Cuba.

The scenario of this grotesque display of savagery was the room of the United Nations Economic and Social Council (ECOSOC) at UN headquarters in New York. The US Department of State presented on that day the world campaign “Jailed for What?”  holding the Cuban regime responsible for Human Rights violations and demanding the release of prisoners of conscience imprisoned on the island.

During the working session, Luis Almagro, Secretary General of the OAS, denounced “the prison conditions of at least 130 political prisoners.”  Simultaneously, the representatives of the U.S. State Department disclosed that the political prisoners on the island are an explicit sign of the repressive nature of the regime and represent an affront to the fundamental freedoms of every human being.

But Cuban intelligence agents and their “quick response diplomatic brigade” were already warned days before and followed their instructions from Havana to sabotage the event.  Led by their ambassador to the UN, Ms. Anayansi Rodríguez, they began to scream deafeningly, hit the tables with their hands and books (typical behavior of savages who do not read them, but use them to make noise). They did not let anyone else to be heard, while “compañera” Anayansi delivered her own speech at the same time and yelling outside of the microphone.

Ms. Kelly Currie, a representative of the United States to the U.N. made her evaluation of the meeting and expressed the following comments:

Logically the practice of neighborhood bullying is promoted in a context characterized by the worsening of the internal socio-economic crisis and the gradual collapse of its ALBA colonies. Now nothing can be argued. They no longer have a narrative. They can only scream.

Last April, at the Summit of the Americas in Lima, the Cuban delegates systematically sabotaged the event. The Secretary General of the OAS was shouted “traitor”, and “CIA agent”. During the previous Summit of 2015 in Panama, Castro’s delegates physically assaulted Cuban opposition representatives living abroad who attended the summit.

However, and up to a point, we must appreciate the staging of these shameful spectacles under the presidency of Miguel Diaz-Canel. The world is getting to know firsthand the intolerance of the regime – whatever the face of its so-called “president” is-so often denounced by Cubans.