CUBA: A NEW FACE AND THE SAME OLD LIES 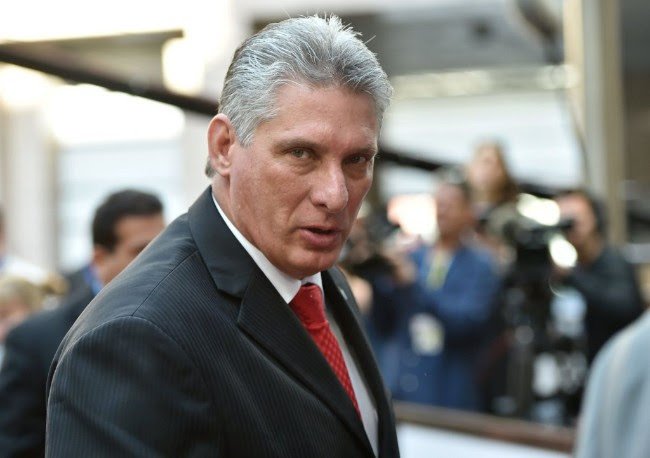 To those who entertained illusions that Miguel Diaz-Canel, the new designated president of Cuba, was a “young civilian”, that would bring refreshed airs to that country, a bucket of iced  water fell on them during his speech at the UN General Assembly.

Diaz Canel not only explicitly made it clear that he represented continuity but he let it be seen throughout his speech in which he praised thoughts from Fidel Castro, Che Guevara, and the current dictator Raúl Castro.

In tune with the propaganda school imposed by Fidel Castro – presenting the world scenario as a calamity and Cuba as an exceptional marvel- Diaz-Canel ignored throughout his speech the serious Cuban economic crisis, the grave and growing poverty, the lack of freedom, the debacle in public health, education and social security, the widespread despair and the continuous exodus of Cubans. Regardless, he drew a grim picture of the world.

By attacking the US embargo he complained that it “includes public and covert programs” that he described as “gross meddling” in internal affairs that “violate the principles on which this organization rests.” He said that “Latin America is the scene of persistent threats” by the United States. “that has proclaimed the validity of the Monroe Doctrine”. He praised the Nicolás Maduro regime for being  “legitimate and democratic” and rejected “the attempts to intervene and sanction” Caracas.

Venezuela already has a foreign intervention: the Cuban

While some balked at the possibility of a foreign intervention to put an end to the mafia kingdom of Caracas, there is complacent silence about the only military intervention that has existed for years in Venezuela: the Cuban. By the way, while Diaz Canel was rejecting the Monroe Doctrine at the UN, the Venezuelan army have send 100,000 troops to the Colombian border accompanied by Cuban, Chinese and Russian troops and advisors. So much for non intervention!

It is pitiful that no one at the UN asked Diaz-Canel if the Cuban troops (including several combat battalions) generals, colonels, intelligence and counterintelligence officers, expert strategists and Cuban officials of all types operating in Venezuela do not constitute a flagrant interference by Cuba in the internal affairs of that country; or if the fact that the Maduro regime is remotely controlled from Havana does not violate the principles on which the UN rests.

Or if it is not appropriate to consider Venezuela a colony of Cuba when the former maintains its supply of free oil to the Cuban dictatorship while its people embark on a regional exodus to escape the prevailing famine.

With his speech Diaz-Canel mocked the whole world. Cuba is precisely the only country that currently tramples the sovereignty of other nations in America. Without the Cuban intervention in Venezuela, Maduro would have been removed from power by the Venezuelan people.

It is Castro’s intelligence that watches over and controls the Venezuelan military and aborts every attempt of conspiracy against Maduro. The nearly 200 Venezuelan officers detained or in prison have been reported by Cuban Intelligence agents or their native subordinates within the Venezuelan armed forces.

To emphasize the Jurassic vocation and the institutional farce of Castroism, the nominal head of the Cuban government insisted on the irrevocable character of socialism on the island, and took for granted the upcoming approval of the new Constitution to be proclaimed in February 2019.

Simultaneously Miguel Diaz-Canel met in New York with American businessmen linked to the agricultural sector and invited them not ” to  waste” the Cuban market of 11 million people. What he did not explain was how Cubans could become consumers with an average monthly salary of $30.

Nor does it seem to have reminded them that in the last annual index of economic freedom in the entire world prepared by the Heritage Foundation out of a total of 180 countries analyzed, Cuba turn out in a remote low place (178) only followed by Venezuela and North Korea. An analysis not very comforting for any potential investor.

In short, Diaz-Canel’s speech in the largest world forum and his visit to the ” Empire” turned out to be more of the same, something that, as late as 2018, is a historical shame.