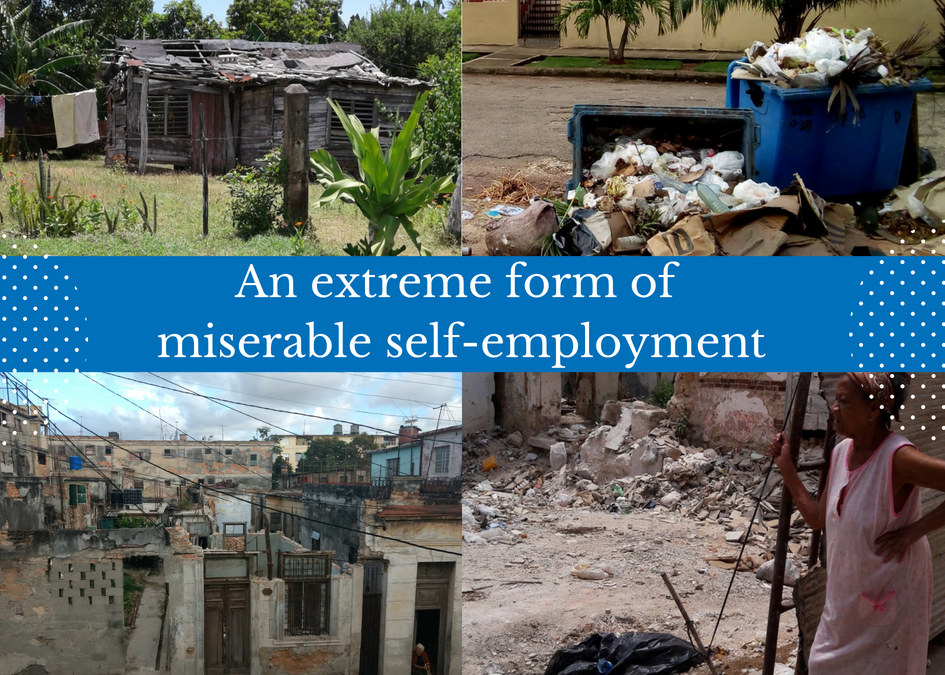 As much as it is repeated that in 1958 the Cuban people enjoyed one of the highest per capita income in Latin America, it will never be enough. The lacerating poverty being suffered today in the once prosperous island is constantly placing the issue on the conversation. Poverty has kept growing since then. Its a Kafkian absurdity. As time goes by, Cubans are getting poorer.

An independent journalist from the Bayamo reported about the health risks faced by many poor people in that city who daily rummage through the municipal garbage dump looking for food waste to feed animals, electronic waste, recoverable shoes, medical waste, etc.

These are the unemployed, elderly retired persons, and former prisoners who can not find work and have to live in extreme poverty, as the UN describes. They collect garbage to sell it to the state-owned raw material company to get some income.

What triggered the reporter’s (Yunior Berges) alarm is that the waste that the provincial hospital throws in that dump includes bags of serums and hemodialysis equipment. It does not matter that they are a source of serious contagious diseases. Collecting and selling waste as raw material is an extreme form of miserable self-employment.

“It’s not much, but when you save the monies for a few days it provides something to eat, even if only for two or three days,” was what a “diver” who called himself Maikel, told the journalist, while another one, Alberto Tamayo, explained that his wife is very sick. Her kidneys do not function well and he is a diabetic. Tamayo works as a security guard in an agricultural cooperative, but what he earns is not enough ” if we do not collect raw material from the trash dumps we die of hunger,” he said.

A retiree who identified himself as Misael said that he lives alone and has no one to help him with his expenses. He worked for 32 years, but now as a retiree receives 240 pesos (10 dollars) and if he does not rummage in the trash he also goes hungry.

These landfill divers stoically endure plagues, flies, mud and highly toxic smoke in the dumpster. And, as explained before, they also manipulate medical waste that can cause illness or death.

Thirty dollars per month is the figure that the UN uses to identify the border lime to “extreme poverty” in the poorest nations of Africa and Asia. A dollar per day. With such miserable income Cubans cannot satisfy their basic needs to survive.

UN diplomats -in particular those representing FAO, the ILO, and PAHO- should ask Maikel, Albert and Misael, if they can meet their most basic needs with What they earn today in “revolutionary” Cuba. Or invite the UN diplomats to visit some of the unhealthy neighborhoods that have multiplied throughout the island.

The lesson to be learned here is that after almost 60 years of “building socialism”, Cuba is now poorer than ever. Its social and economic backwardness approaches the dramatic levels of some countries of Africa and Asia. Can anyone reasonably think that such sacrifice was worth it?