THE SWEETHEART OF LEFTIST DICTATORSHIPS AT THE UNITED NATIONS 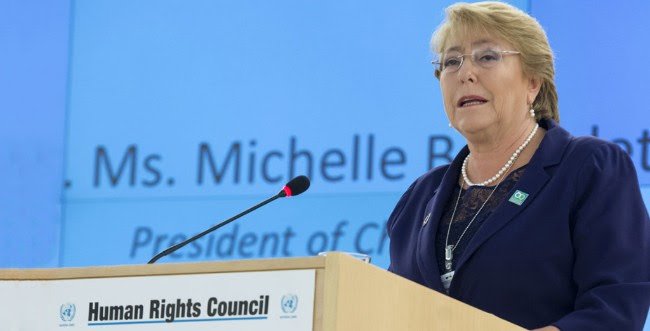 The Charter of San Francisco to constitute the United Nations Organization, expresses in its preamble:

“We the peoples of the United Nations determined to preserve succeeding generations from the scourge of war that twice during our lives has inflicted on humanity untold suffering, to reaffirm faith in the fundamental rights of man, in dignity and value of the human person … ”

In its genesis, the UN established that respect for human rights was one of the reasons for this institution to exist.

The Portuguese socialist politician Antonio Guterres, current Secretary General of the United Nations (UN), has just chosen another socialist Ms. Michelle Bachelet, former president of Chile, to assume the responsibility of UN High Commissioner for Human Rights, a key position within the structure of the UN.

However, the record of Ms. Bachelet does not automatically endorse her as the best option for that very high responsibility, rather it may disqualify her. That’s why, upon learning the news, the US ambassador to the UN, Nikki Haley, asked Ms. Bachelet to take care of Cuba and Venezuela. Of course, no one expects her to do so now, since she has always been a staunch supporter of the Castro and Chavez dictatorships.

Cubans remember that in 2009,  during a meeting with Cuban officials while visiting Havana, the then president of Chile was told that Fidel Castro accepted to receive her in person.  The admirer of Castro and Che Guevara left her interlocutors standing and ran to hug and take selfies with the worst tyrant in the history of the Americas.

When Fidel Castro died, in a message to his brother Raúl, Ms. Bachelet described the deceased dictator as “a leader for dignity and social justice in Cuba and Latin America.” Bachelet also lavishly praised Hugo Chávez, and although the lieutenant colonel was crushing human rights in Venezuela, she highlighted “his deep love for his people,” and his devotion for “generating a better life for all and for his profound love for Latin America”.

She has always refused to condemn Nicolás Maduro. In July of 2017, Bachelet was criticized by her compatriot José Miguel Vivanco, America’s director at Human Rights Watch, for her “grave error” of “not characterizing the Maduro regime as a dictatorship.”

Despite being the first president of UNASUR, the leftist Bachelet never cared about the brutal repression and imprisonment of Cuban and Venezuelan opponents. She never accepted to meet with any opposition activists at the Chilean Palace of La Moneda while they visited her country. She was not able to condemn in countries governed by left-wing populists, nor when the beatings and abuses were applied to the Cuban Ladies in White (although she served as Executive Director at the Office for Women of the UN!).

The decision by Secretary General Guterres has all the traces of a step taken based on ideological preferences, rather than on the suitability of the former president to assume the defense of human rights as it is stated in the UN Charter.

This appointment does not constitute an “error” of the new Secretary General of the UN. It actually represents a deliberate strategic decision to ensure the continuation of the hegemonic control of key positions within that institution by a certain left. The type of “left” that is alien to the suffering of all others who do not belong to their ranks.