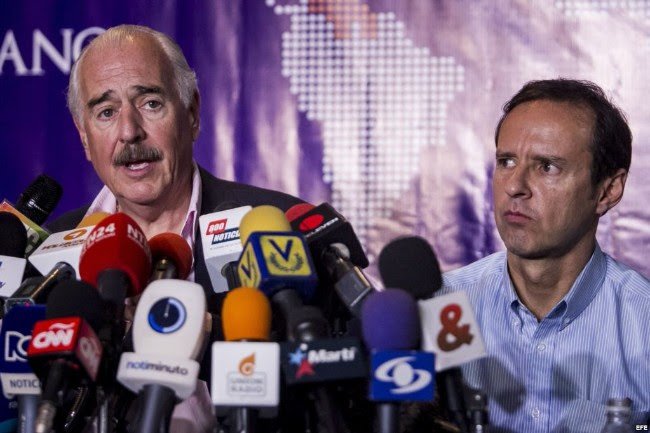 Expelling from the José Martí Airport in Havana back to Bogota, Colombia, former Presidents Andrés Pastrana Colombia, and Jorge Quiroga of Bolivia, far from constituting a ” failed anti-Cuban ” media maneuver, as the Castro regime affirmed, it was the opposite.

The refusal to enter the country of both ex- Presidents, the Secretary General of the OAS, Luis Almagro, and the Chilean deputy Jaime Bellolio, to attend the Oswaldo Payá Award ceremony, evidenced to the world the primitive nature of Raúl Castro’s dictatorship. As Secretary Almagro indicated in a message directed to the Award ceremony, which was courageously held despite the cowardly harassment of the regime’s henchmen, “the worst form of interventionism that exists in the international community is providing impunity to a dictatorship.”

Meanwhile, the announced Presidential change to take place next April is treated with an eloquent disdain by the Cubans populace, aware that nothing will change on the island while the real power remains in the hands of the criminal and corrupt military elite, led by Castro family. The worst thing is that in the weeks leading up to his formal withdrawal from the government – not from his political-military power – the outgoing President only provides bad news and exacerbates the political repression so that the Cuban people may remember him for what he truly was: a ruthless despot . The latest initiative announced by the government is that, in the absence of foreign currency, a reduction of imports will take place.

With an amazingly unproductive economy that barely produces any goods, Cuba depends on imports. It is incredible that in a fertile tropical island it is necessary to import 80% of the food that is consumed.  Everything else it’s also imported such as medicines, basic consumer goods and raw materials. With the reduction of imports, the existing socioeconomic crisis that is already raging with Cubans will intensify. Poverty will worsen.

And there is no hope that the government can increase its foreign exchange earnings to bring imports at least to the level they had hitherto. If the country has gross tourist revenues of $2,800 million, the true story is that $ 933 million leave the country and only $1,867 million remain as net income. And here comes the news that the dictatorship should have highlighted: in 2017 Cubans residing in the US sent $ 3,575 million to their families and friends.

That figure, which is net, “clean of dust and straw,” doubles the estimated figure of tourism net income to the island. If we add the total value of packages sent and trips to Cuba from the US, the magnitude of the sustained transfer of resources to the population from the so-called capital of the exile community is huge.

But the same troglodyte regime that expels two former Latin American presidents from the Island also denies entry to their country of birth to hundreds of thousands of these Cubans. As if that was not enough, this repression extends to the children of those Cubans who are blacklisted for their political believes: they have unconstitutionally decided to deny Cuban citizenship to their children if they were born abroad. Nevertheless, despite of everything, the historical time of this dictatorship is coming to an end.