Raúl Castro: After him, a biblical “Universal Flood”? 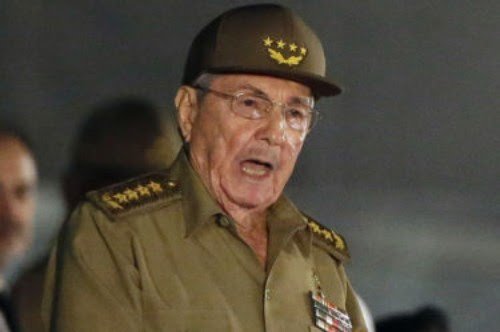 As the date gets closer in which General Raúl Castro has promised to surrender his position as President (but not as First Secretary of the Cuban Communist Party and supreme military commander), the economic and social crisis is worsening.

Usually, in most normal countries, the outgoing President wants the people to keep good memories of his or her legacy. Castro retires while sinking Cuba into more poverty, despair and placing it among the most backward and “disconnected” countries of the Western Hemisphere. The General does not leave order behind, but a legacy of chaos.

The dictator refuses to allow the citizenry to have better Internet access in Cuba, a country that in this XXI century is marginalized from modernity and the prosperity associated with it.  Things go from bad to worse but Cubans, “disconnected” from the World Wide Web, only find out about it because of the daily deterioration of their living conditions. In order to sustain the “information blackout”, repression against independent journalists is increasing.

Officials with the Ministry of Finance and the National Bank of Cuba affirm, on condition of anonymity, that the Cuban economy in 2018 will suffer the worst crisis of the last five years and that this dark perspective has already been analyzed in meetings within the government and the Communist Party. A leader of the Ministry of Finance said that in the second half of 2018 more than 100 state companies could disappear because they will become “dangerously” unprofitable.

On the other hand, the hard currency received by the regime for the export of “white-robes slaves” (in Venezuela and Brazil), have declined significantly. And less and less oil comes to the island from Venezuelan and less tourists from the US.

Under such thunderstorms the dictator, instead of releasing his grip, is tightening his fist even more. He doesn’t eliminate the absurd restrictions to the private sector, is actually increasing them on a daily basis, and has announced that there will be no wholesale markets allowed for a long time.

The statements given to Radio Marti by the opposition economist Marta Beatriz Roque are striking, “on the island there are more than 600,000 self-employed and the Cuban government has recognized that 75% of the state budget comes from taxes on self-employment, hence driving these entrepreneurs out of business could bring serious social problems.” If that Information is accurate, by decreasing the global income of the private sector there will be fewer resources for the already deteriorated public services.

Without market reforms, the prices of food and consumer goods provided by the private sector will necessarily remain high, people will be increasingly poor, governability will be every time lower, and social unrest increasingly high.

If something is changing in Cuba, it is the willingness of the people to make their demands public. The impoverished socio-economic circumstances mentioned above may increasingly incite civil disobedience.