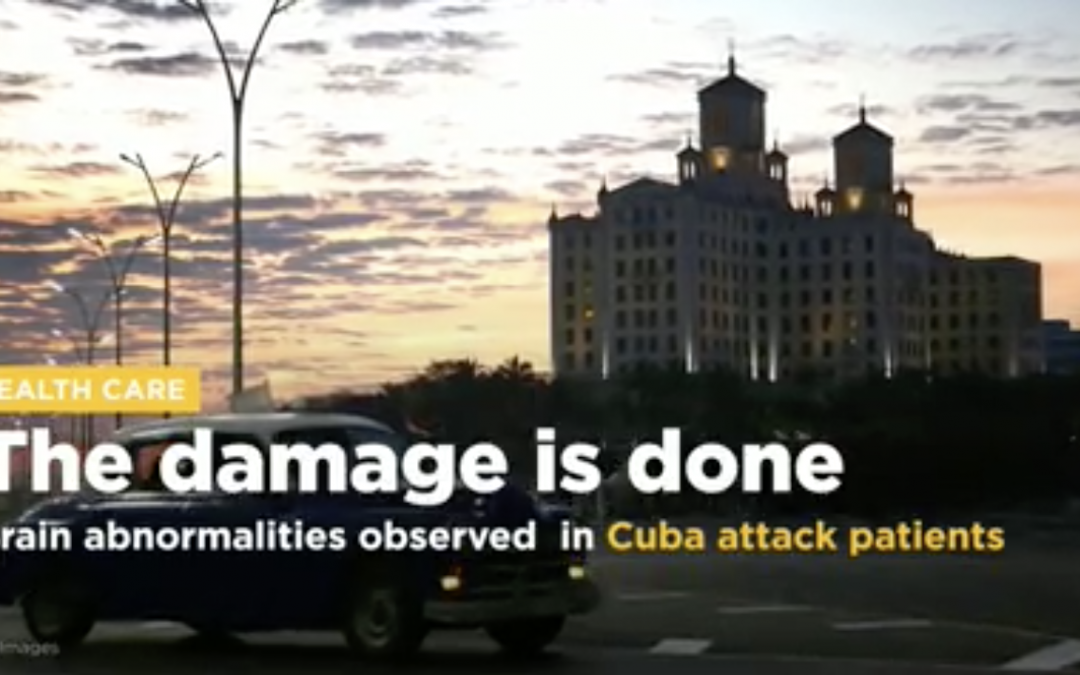 WASHINGTON (AP) — Doctors treating the U.S. embassy victims of suspected attacks in Cuba have discovered brain abnormalities as they search for clues to explain hearing, vision, balance and memory damage, The Associated Press has learned.

It’s the most specific finding to date about physical damage, showing that whatever it was that harmed the Americans, it led to perceptible changes in their brains. The finding is also one of several factors fueling growing skepticism that some kind of sonic weapon was involved.

Loud, mysterious sounds followed by hearing loss and ear-ringing had led investigators to suspect “sonic attacks.” But officials are now carefully avoiding that term. The sounds may have been the byproduct of something else that caused damage, said three U.S. officials briefed on the investigation. They weren’t authorized to discuss it publicly and demanded anonymity.

Physicians, FBI investigators and U.S. intelligence agencies have spent months trying to piece together the puzzle in Havana , where the U.S. says 24 U.S. government officials and spouses fell ill starting last year in homes and later in some hotels. Secretary of State Rex Tillerson said Wednesday he’s “convinced these were targeted attacks ,” but the U.S. doesn’t know who’s behind them. A few Canadian Embassy staffers also got sick.

Doctors still don’t know how victims ended up with the white matter changes, nor how exactly those changes might relate to their symptoms. U.S. officials wouldn’t say whether the changes were found in all 24 patients.

But acoustic waves have never been shown to alter the brain’s white matter tracts, said Elisa Konofagou, a biomedical engineering professor at Columbia University who is not involved in the government’s investigation.

“I would be very surprised,” Konofagou said, adding that ultrasound in the brain is used frequently in modern medicine. “We never see white matter tract problems.”

Tillerson said the U.S. had shared some information with Havana, but wouldn’t disclose details that would violate privacy or help a perpetrator learn how effective the attacks were.

“What we’ve said to the Cubans is: Small island. You’ve got a sophisticated intelligence apparatus. You probably know who’s doing it. You can stop it,” Tillerson said. “It’s as simple as that.”

The case has plunged the U.S. medical community into uncharted territory. Physicians are treating the symptoms like a new, never-seen-before illness. After extensive testing and trial therapies, they’re developing the first protocols to screen cases and identify the best treatments — even as the FBI investigation struggles to identify a culprit, method and motive.

Doctors treating the victims wouldn’t speak to the AP, yet their findings are expected to be discussed in an article being submitted to the Journal of the American Medical Association, U.S. officials said. Physicians at the University of Miami and the University of Pennsylvania who have treated the Cuba victims are writing it, with input from the State Department’s medical unit and other government doctors.

But the article won’t speculate about what technology might have harmed the workers or who would have wanted to target Americans in Cuba. If investigators are any closer to solving those questions, their findings won’t be made public.

The AP first reported in August that U.S. workers reported sounds audible in parts of rooms but inaudible just a few feet away — unlike normal sound, which disperses in all directions. Doctors have now come up with a term for such incidents: “directional acoustic phenomena.”

Most patients have fully recovered, some after rehabilitation and other treatment, officials said. Many are back at work. About one-quarter had symptoms that persisted for long periods or remain to this day.

Earlier this year, the U.S. said doctors found patients had suffered concussions, known as mild traumatic brain injury, but were uncertain beyond that what had happened in their brains. Concussions are often diagnosed based solely on symptoms.

Studies have found both concussions and white matter damage in Iraq and Afghanistan war veterans who survived explosions yet had no other physical damage. But those injuries were attributed mostly to shock waves from explosions. No Havana patients reported explosions or blows to the head.

Outside medical experts said that when the sample of patients is so small, it’s difficult to establish cause and effect.

“The thing you have to wonder anytime you see something on a scan: Is it due to the episode in question, or was it something pre-existing and unrelated to what happened?” said Dr. Gerard Gianoli, an ear and brain specialist in Louisiana.

As Cuba works to limit damage to its reputation and economy, its government has produced TV specials and an online summit about its own investigation. Cuba’s experts have concluded that the Americans’ allegations are scientifically impossible.

The Cubans have urged the U.S. to release information about what it’s found. FBI investigators have spent months comparing cases to pinpoint what factors overlap.

U.S. officials told the AP that investigators have now determined:

— The most frequently reported sound patients heard was a high-pitched chirp or grating metal. Fewer recalled a low-pitched noise, like a hum.

— Some were asleep and awakened by the sound, even as others sleeping in the same bed or room heard nothing.

— Vibrations sometimes accompanied the sound. Victims told investigators these felt similar to the rapid flutter of air when windows of a car are partially rolled down.

— Those worst off knew right away something was affecting their bodies. Some developed visual symptoms within 24 hours, including trouble focusing on a computer screen.

The U.S. has not identified any specific precautions it believes can mitigate the risk for diplomats in Havana, three officials said, although an attack hasn’t been reported since late August. Since the Americans started falling ill last year, the State Department has adopted a new protocol for workers before they go to Cuba that includes bloodwork and other “baseline” tests. If they later show symptoms, doctors can retest and compare.

Doctors still don’t know the long-term medical consequences and expect that epidemiologists, who track disease patterns in populations, will monitor the 24 Americans for life. Consultations with the Centers for Disease Control and Prevention are underway.