Mogherini: totalitarianism is not bad for Cuba 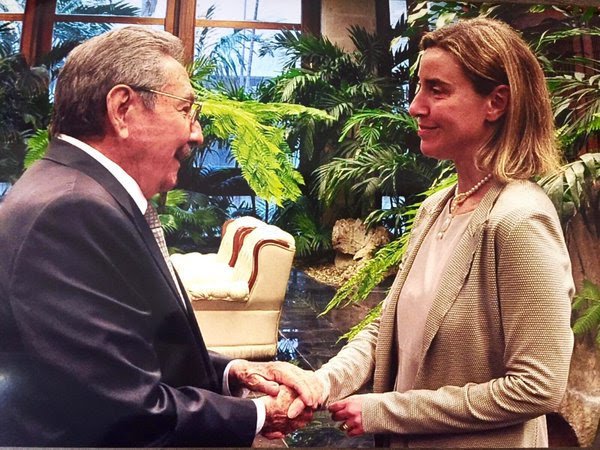 Socialist Federica Mogherini, who heads the European Union diplomacy, said in Havana that this regional bloc wants to increase economic operations with Cuba. Mogherini added:”Against those who raise walls and close doors, we Europeans want to build bridges …” (i.e. with the regime that tyrannizes Cubans since 1959). One wonders if she would have shown as much enthusiasm for building bridges and shown the same happy smiles as in the photos taken in Cuba if her counterpart had been Augusto Pinochet in Chile or Frederik de Klerk in South Africa.

On the same date that the European socialist militant arrived to the island, an independent human rights organization reported that in 2017 there were 5,155 political arrests in Cuba including beatings. Also that day minions of the Ministry of the Interior arbitrarily detained Berta Soler, the national leader of the Ladies in White.

As if there were not enough evidence to convince Europeans that part of the Cuban population is persecuted and discriminated against because of their political beliefs, new immigration regulations were adopted last week. This time to deprive the children of Cubans born abroad of their constitutional right to Cuban citizenship in those cases where their parents profess ideas contrary to those of the Havana regime.

The conclusion is obvious: for Ms. Mogherini a totalitarian one-party regime may be unacceptable in Europe, but it is acceptable in the so-called third world, especially if it claims to be progressive and anti-American.

Very timely and forceful was the editorial of the “The Washington Post” whose title by itself was eloquent:”Cuba does not need a clone of Castro.”The influential newspaper recounted brutal human rights violations by the Castro dictatorship, and stressed that what Cubans really need is the “genuine opportunity to decide their own future.” For being an editorial from a well known journal as the Post, their editorial statement reached all corners of the planet, coinciding with the photogenic smiles dispensed by Ms. Mogherini to the Cuban dictators. Shame on her!