Welcome to 2018: “Year From Conflict to Change” 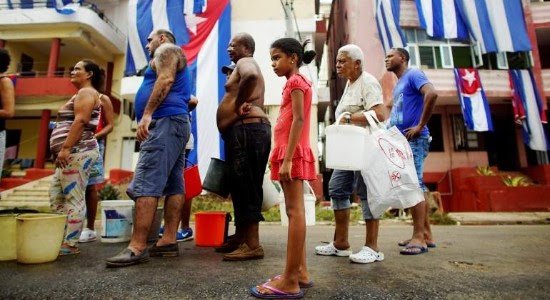 2017 is almost gone and the Cuban people are poorer and less free than at the beginning of the year, last January. Most Cubans have nothing to celebrate this holiday season and lots to worry about. They know that 2018 will be even more difficult if essential required changes do not happen.

The dictator seems determined to leave the worst possible legacy as head of government. He is about ready to leave his position as president in a couple of months and, far from loosening his grip, he tightens it more and more, making the lives of Cubans harder.

General Castro not only did not implement the “reforms” that many expected of him, but his few and insufficient changes were paralyzed, reversed or postponed without an undetermined future date. Castro II despises his own people, and at the same time shows his ineptitude as a political leader.

The repression continues. Poverty and undernourishment of the population are aggravated. Exports decline because the country produces less and less. The ongoing economic recession is sustained due to the obsolescence of the system, as well as the Venezuelan crisis.

But 2017 also ends with a rise of social conflict.

The Cuban people have lost their fear of protesting. There were several street demonstrations of citizens demanding a solution to basic problems such as food, housing, and respect for basic freedoms.

The Cubans are fed up. The housing situation is the worst in all of republican history. In a few days the Cuban revolution will celebrate 59 years of dictatorship and Fidel Castro’s promise “to build a decent home for each Cuban family.”

Almost six decades later, the population of the island, either do not have housing  or live in dilapidated or near-crumbling properties. And hundreds of thousands live in makeshift shacks in unhealthy neighborhoods.

Castroism did not solve the problem of housing, and did not end the miserable life in the poor neighborhoods , but multiplied them. The last straw is that it periodically evicts those families and throws down their hovels. The regime reported that in 2017 it detected 127,693 “urban illegalities” on the island, from which it “solved” (evicted) 23,000 until September.

One of the population segments most affected by the rising poverty is that of retirees and pensioners. With an average of 200 pesos per month (8 dollars) that they receive from the “revolution”, these people cannot feed themselves and live in extreme poverty. They are forced to sell on the streets whatever they can, to beg, or to commit a crime. All that after having worked a lifetime for society.

The year also ends with the worst shortage of medicines to be remembered on the island in a long time, because the reduction in the importation of medicines and of raw materials to produce them in the country.

As 2017 comes to a close, those in the Political Bureau of the PCC who like to baptize every new year with a revolutionary slogan may well named the next one as ” 2018 : Year From Conflict to Change.”

The Cuban power elite knows that they can no longer use the same methods to keep everyone in line. Cubans are by now conscious that their only hope is not to escape in a raft, but to struggle for a real change in the country. That is the only path to transform social conflicts into true solutions: democracy, freedom, and prosperity.