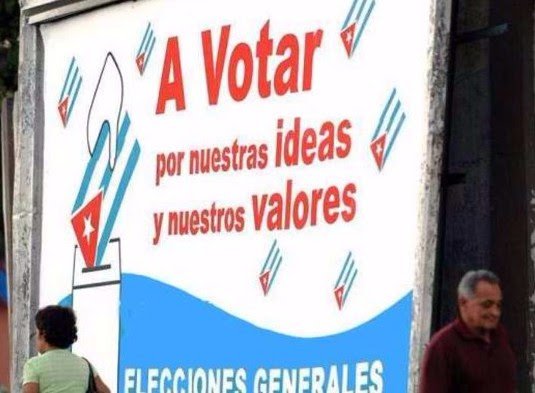 Almost a week after the so-called elections took place in the island, the Cuban government changed the figures on voter turnout that were originally released on November 26.

It was initially reported that 85.9% of registered voters attended the polls. That was the poorest participation by the “people” since these election drills were initiated in 1976.  And that figure, without any doubts, have already been inflated. Why? Because they have always done so and because in this occasion this exercise coincided with the first anniversary of the death of the Cuban dictator (Fidel Castro) and, for that reason, the Communist Party made a call to assume the voting exercise as “a commitment to Fidel.”

The initial figures reflected that of the 8.8 million voters registered in the country voted 7.6 million and 8% of them (623.128) annulled the ballot or left it blank. Of course there were many more who cancelled their votes, but the regime made them arbitrarily valid as they always do. The message was that millions of voters refused to respect their “commitment to Fidel.”

In any case, it should be remembered that this forensic statistic examination does not have much relevance because the so-called elections in all totalitarian countries do not express the state of mind or the preferences of citizens.  There were so-called “Socialist Elections” (with single party political systems in police states) in the USSR, GDR, Romania, Czechoslovakia and other eastern socialist countries almost until the day before its resounding collapse. Statistical disputes with fraud means little in a fraudulent electoral regime due to its very illegitimate origin and operational modality.

On the other hand, there were some bad news from Spain for the regime. When the Spanish cider bottles were almost prepared to entertain King Felipe VI in Havana, the news came from Madrid that the monarch and his wife postponed their official trip to Cuba until Raúl Castro leaves the presidency of the country.  It’s a moral personal setback for the dictator, who wanted to be the first Cuban head of state to receive a king of Spain in an official visit to the island. There has never been any since Columbus landed in the Americas in 1492.  That deprives Castro II of a sound international political boost and media splash for his farewell.

Another bad news for the Castro regime this week was the forecast that the sugar harvest (2017-2018) which has just begun, will be lower than that of 2016-2017, which was 1.8 million tons (TM) of sugar. Because of the drought, Hurricane Irma and the apathy of workers for the miserable salaries they receive, experts estimate that only 1.5 million of Mt of sugar will be produced. That is one third of the sugar harvest obtained in 1925.

Finally, the State recognized the serious scarcity of 801 basic medicines and placed the blame on the lack of hard currencies to pay the bills to foreign suppliers of medicines or raw materials to produce them in Cuba. Logically, those exporters have stopped supplying them to the island. Interestingly, the State is silent on the tons of medicines shipped to other countries together with their programs to export medical services and products to foreign countries.

Besides the shortage of medicines there is also a shortage of medical services due to the massive export of doctors and health technicians.  However, the revenues to the country and the way they are invested are not controlled by the submissive Popular National Assembly.

Cuban medicine has been reduced to a myth to be used in marketing efforts for exporting doctors and medicines. The doctors are transformed into slaves with a white robe to fill the pockets of the power elite. And the common Cuban is only a witness to empty pharmacies and foreign medical students who attempts to provide medical services in the increasingly deteriorated public health clinics.

None of the winning candidates in these “elections” has campaigned about how they intend to solve the public health problems or restore the production and productivity of the sugar industry.  None of that is relevant for a socialist candidate.  All that counts is the “loyalty” shown to those in power in Cuba.  The only conditions and “merits” essential to be a candidate in the present electoral system in the island is his or her unconditional submission to power. Those in power “select” who will serve them. That is the ultimate reality.