Cuba as ‘a medical powerhouse’, a myth made shreds 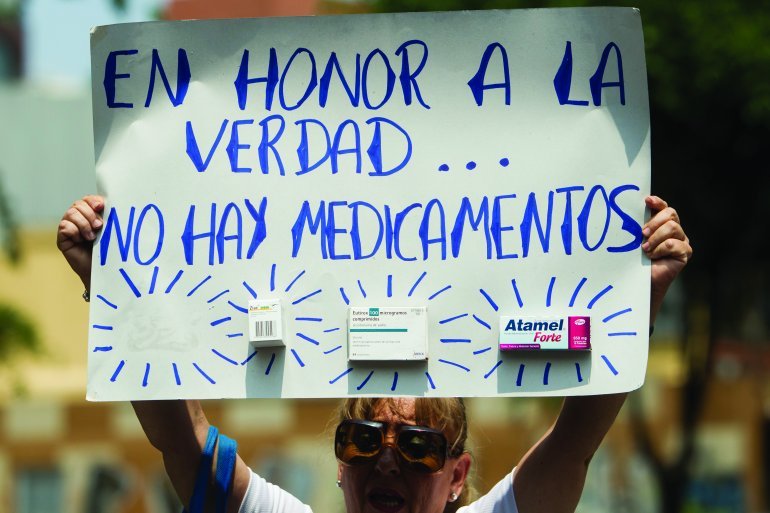 Cuba as a “medical powerhouse”, thanks to the revolution, was the best political-ideological marketing product by Fidel Castro, among the many that he manufactured in his 52 years as a dictator.

Free public health has been the flagship of Castroist propaganda. El Comandante sold three great fallacies to the world:

1) Due to the superiority of the socialist economic model, Cuba became a “medical powerhouse”,

2) The revolution is altruistic and, ergo, it provides disinterested medical aid to underdeveloped countries, and

3) Before 1959 medical services on the island were a calamity.

It was a credible myth for many. It was based on the old technique of saying part of the truth and not the whole truth. There is no better way to lie. Certainly from the 1960s until 1991, in Cuba, public health services expanded throughout the country, including rural areas where they had never existed.

And why only until 1991? There lies a sizable piece of the myth. In December 1991 the Soviet Union disintegrated and the Fidelista health balloon deflated. When subsidies to the Castros came to an end, the medical services were laid bare as a direct gift from the Kremlin, with political purposes fatal to the Cubans.

In the 31 years of the “Cuban-Soviet fraternity” Cuba received about $ 115 billion dollars. But Castro used them basically to feed his ego. He intervened militarily in several countries in Africa and the Middle East, exported the Che Guevara brand “liberation war” to Latin America, and became the “redeeming” leader of the Movement of Non-Aligned Countries and the Third World.

And in Cuba, he earmarked the money received from the USSR mainly to social expenditures disproportionate to the modest size of the Cuban economy. It was not invested to develop the country’s infrastructure and economy and then pay for medical services with Cuba’s own resources. Indeed, the money that he did invest in the Cuban economy was consumed by pharaonic plans that failed one after another because they were impracticable. From the mother of all sugar harvests in the world, to hybrid cows that gave neither milk nor meat, to the Havana Agricultural Belt, and so many other irresponsible megaprojects.

To prop up the myth, Castro and his regime insisted on the poor degree of development of medicine in Cuba before 1959. But statistics from the UN, the World Health Organization (WHO) and the International Labor Organization (ILO) say a different thing.

Cuba’s advance in medicine had a remote background. By order of Charles V, in 1522-23 one of the first three hospitals in America was built in Santiago de Cuba, along with one founded in Santo Domingo in 1503, and another in Mexico in 1524, according to historian Herbert Stern. In 1847, Cuba was the first nation in Latin America to apply ether anesthesia. In 1881 a Cuban doctor, Carlos J. Finlay, discovered the transmitting agent of yellow fever.

In 1907 the first X-ray service in Latin America was opened in Havana. At the end of the 1950s, Cuba was the second country in the region with the lowest infant mortality rate, with 33 per thousand live births. At that time, in 1958, Italy had a rate of 50 per thousand; France had 34 per thousand, and Japan 40 per thousand, according to WHO.

The teaching of medicine in Cuba began in 1726 under the Dominican Order in Convent San Juan de Letrán, and since 1842 at the University of Havana. During the Republic (1902-58) many Cuban doctors acquired international fame and were recognized among the best in the world in their specialties.

In 1900 the Dentistry School was inaugurated at the University of Havana, one of the first in the continent. Dentistry in Cuba was comparable to the best worldwide, with eminent dentists and the most modern technology of the time.

Is medical care free in Cuba?

In March 2017, the regime began to submit symbolic hospital bills to the patients so that they know how much the hospitalization they receive free of charge costs. False. There is no gratuity in Cuba or anywhere in the world. Everything has a cost and someone pays for it. A capitalist state covers public services with taxpayers’ money.

In Cuba, the State keeps the bulk of the workers’ salary. That is, it expropriates them of all surplus value (in Marxist terminology). Cuba is the only country in Latin America where average salary is less than a dollar a day, which the UN places as extreme poverty. According to Cuba’s National Office for Statistics and Information (ONEI, in Spanish acronym), today the daily wage on the island is $ 0.93, that is, 27.92 dollars per month. In Haiti it is more than double. Venezuela, after Castroist colonization, has the second lowest wage in the continent, with 37 dollars a month.

Also, the alleged gratuity is paid for by the high prices for state sales, and the very low prices farmers get for their harvests. In shopping centers, controlled by the military, since the use of the dollar was legalized in 1993, a tax of 240% was levied on all products. Then it continued increasing up to 1,200% in some cases.

The worst thing is that every visit to the doctor, surgery, or treatment is paid by the people with poverty and scarcity. With absurd prohibitions and abuse. With the anguish of not knowing what they are going to eat the next day, the lack of freedom and not seeing the light at the end of the totalitarian tunnel.

Another of the great Castroist lies has been to make believe that the university education in Cuba was only for “rich children”. False. At the University of Havana the annual tuition cost only 60 pesos -60 dollars then-, to be paid in three installments. That is, with 5 pesos a month, a youth from Havana could graduate as a doctor (or engineer, lawyer, architect, public accountant, physicist-mathematician, biologist, botanist, doctor in Philosophy and Letters, or Pedagogy). Of course, if they were from the provinces they had to stay in a guest house.

When “real socialism” collapsed, Cuba sank into a deep crisis. Unlike previous ones, such as the one that followed the 10 Million-Ton Harvest, this one is terminal. There is no possible recovery until the political-economic system is changed. The Venezuelan subsidies mitigated the absence of the USSR for a time, but the “Cubanization” of Chavismo also sank Venezuela, which has been diminished and is no longer self sufficient.

And everything gets worse after thousands of doctors and health professionals are sent to work abroad. As a consequence, primary care and its pillar, the family doctor and nurse, have almost disappeared with the reduction of more than 23,000 family doctors and nurses.

More than 33,000 Cuban doctors, one third of the existing 90,161 according to the 2016 Statistical Yearbook of Health, work in 62 countries as ‘white-robed slaves’. The regime expropriates 75% of their salaries, which add up to about $ 8 billion dollars per year. They are the largest source of foreign currency income in the country, along with remittances, travel and packages from the US.

Cuban economist professor Carmelo Mesa Lago calculates that Cuba today has one doctor not for every 127 inhabitants, as the government proclaims, but one for 234 inhabitants, just as in 1993, the worst year of the post Soviet period.

Patients have to bring gifts and bribe doctors and dentists to receive acceptable care. Many surgeries are not performed due to lack of surgeons, or the wherewithal to operate. Many doctors leave the profession. For example, a doctor from Matanzas, called María Elena, sells handicrafts under a large umbrella on the street, because as a doctor she was paid very little, she explained to Radio Martí.

The “revolution of the humble” far from increasing the number of hospitals and beds, or modernizing them, as do all countries, closes them. Since 2010, 64 hospitals have been closed. The country has already lost 32% of its hospitalization capacity. Amazing. The number of polyclinics has been reduced by 9%. Data from Mesa Lago show that total health personnel was reduced by 22% between 2008 and 2016. The number of technicians fell by 54% and nurses by 16%. In 2010 alone, 47,000 employees of that sector were fired.

To make matters worse, all rural hospitals – a bastion of Castroist propaganda – and rural and urban health posts were closed in 2011. Rural workers and their families are referred to regional hospitals, but due to lack of transportation in cases of emergency their lives are at risk. Maternal mortality increased nationally by 34% between 2007 and 2015. Diagnoses and costly tests have drastically declined.

There is a severe shortage of medicines and supplies for surgery. Patients should bring their own bed sheets, pillows, light bulbs and even mercurochrome. There is no running water; the walls and floors are dirty; cockroaches, mosquitoes, and bad odors are rife.

In pharmacies there are no medicines, not even aspirin or other pain killers. According to independent journalists, hypertensive, cardiac or diabetic patients may be months without their medications. There are no psychotropic drugs available in a country where depression and stress are alarming. Prices on the black market are astronomical and many have to pay at the cost of lack of food.

Dentists are not enough (there were about 14,000 in 2012, according to ONEI). There is a shortage of dentistry chairs, a shortage of technical personnel, a dangerous lack of hygiene. There are no resins to repair teeth, nor materials to make dentures. On the streets you can see that people still young are missing several teeth. Many suffer from digestive problems because they cannot chew well.

Fidel Castro deceived everyone doubly: neither the revolution was capable of paying the huge public health expenses, nor the real purpose was to care for the health of Cubans, but to legitimize the dictatorship, with money from others.

The socialist economic system, unproductive by its own unnatural character, does not generate sufficient resources. Only with the Soviet subsidies was it possible. And behind the medical showcase Castro politically screwed himself to power and masked the Orwellian farm nature of the island.

El Comandante was never interested in the welfare of anyone, but only “to have power and glory,” as he confessed to Alfredo Esquivel, a colleague and friend of his at the University of Havana, in the late 1940s. Fidel perceived himself well above the other Cubans and underestimated them. He never cared to make them suffer.

But the money given by Moscow dried out, and everything fell apart. Raúl Castro, mediocre, insecure, self-conscious at the “brilliance” of his brother, continued it all as a sacred dogma. But without a penny. And the regime shed its altruistic and “internationalist” mask: the massive training of Cuban doctors was not -and is not- to take care of the health of Cubans and help the Third World, but to export doctors as state merchandise to obtain foreign currency, needed by the dictator and his civic military clique to continue enjoying the “honeys of power”.

In the meantime, dengue fever returned to Cuba. And cholera, malaria, and tuberculosis. There is Zika, and many other bacterial and viral diseases that date back to colonial times. To get a visit to a specialist, a patient must wait up to three months. They are given a prescription that expires after three days, and the patient does not get the medicine because there are no drugs in the pharmacies.

The “medical powerhouse” became a disaster. It is dramatic and sad for a country that was at the world vanguard point in medicine, and that today has one of the worst medical services in the West.

However, there are those around the world who still believe that beautiful myth is real. Those believers should be recommended to go to Cuba, visit hospitals, polyclinics, and dental clinics, outside the circuit reserved for tourists; to talk to patients, doctors and employees. And then give their opinion about the subject.