A FOOLISH INSISTENCE ON FAILURE 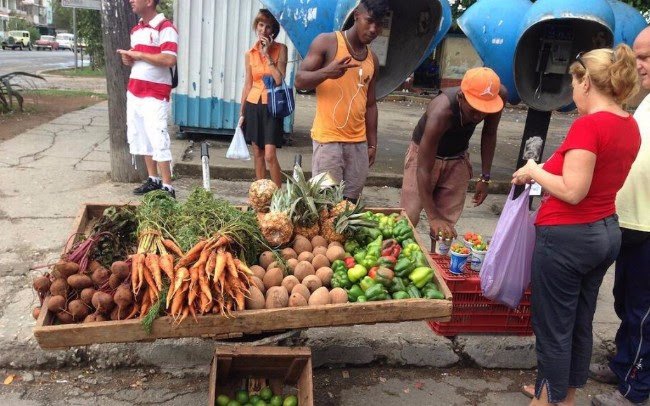 Facts are stubborn. Nobody in their right mind can believe in the “superiority of socialism” when the Cuban National Office for Statistics and Information (ONEI, Spanish acronym) reported that with only 36% of the country’s cultivated land, private owners and beneficiaries in usufruct, (i.e. all non-state lands) produced in the first semester 73% of vegetable roots, 79% of plantains, 81% of tomato, 62% of rice, 84% of fruits, 87% of corn, 72% of beans and 83% of citrus.

In summary: three-quarters of the produce and four-fifths of the plantains consumed by the population are produced by private farmers, whether or not they own the land. The State, with much more agricultural land, produces barely a fifth of those foods, vital in the Cuban diet.

The height of folly is that while ONEI statistically reflected the superiority of the free market system, Foreign Minister Bruno Rodríguez raised the arm to his North Korean counterpart, Ri Yong-ho, on a visit to Havana, and together they declared euphorically that Korea North and Cuba “are building socialism.”

Pathetic: precisely because they suffer socialism, both countries are two of the most backward in America and Asia. While South Korea is a global economic powerhouse, North Korea suffers from famines that have killed millions of people. North Korea is only noteworthy for its threats to unleash an atomic inferno whenever decided by its insane communist monarch Kim III.

On the other hand, the Castro dictatorship reiterated that it is not going to hand out more licenses to street vendors, and blamed the high prices of agricultural produce on the “excessive ambition of the carters and intermediaries”. In other words, Castroism cavalierly ignores its own ONEI, which shows that the low supply (and rising prices) is an effect of socialism.

Meanwhile, in Guantánamo Ministry of Interior officers told UNPACU activists: “This is not Venezuela, we are going to reduce you to zero.” But what UNPACU did was to report to the International Commission on Crimes against Humanity by Castroism – Justice Cuba— the case of its activist Wilmar Villar, who died in prison in 2012 because of a hunger strike. And Berta Soler reiterated that the Ladies in White will continue on the streets.

The government clings to its unsuccessful system, social conflict increases throughout the island and the opposition reiterates that it is not willing to be intimidated. This is how we inaugurate 2018.