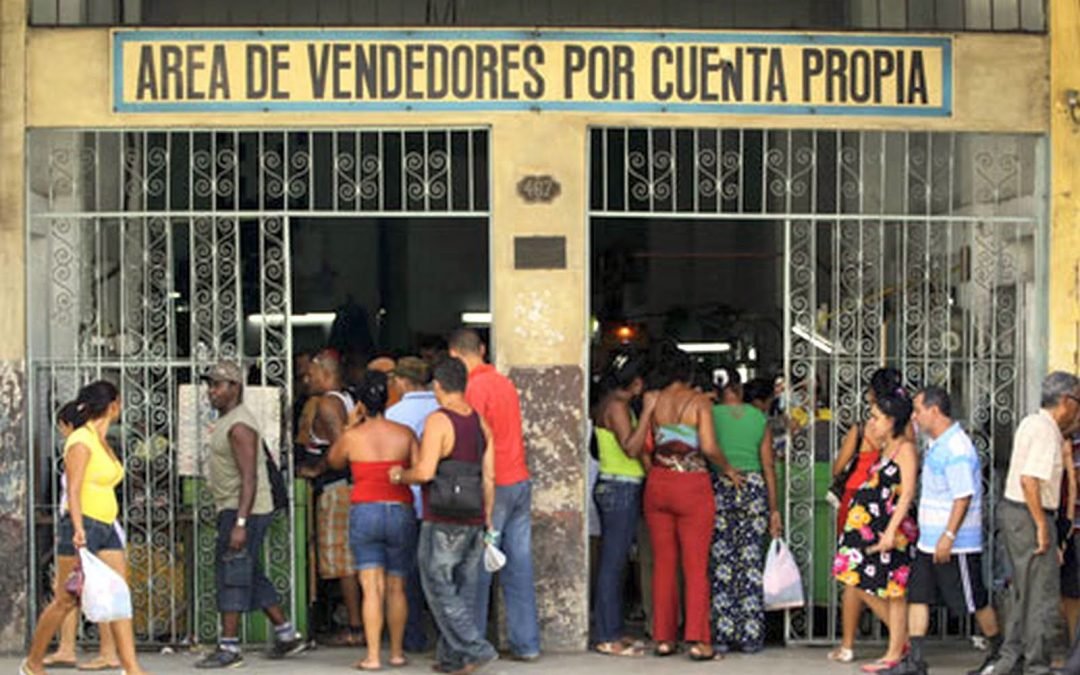 As a strong expression that Castro’s military leadership is not interested in the well-being of the people he claims to represent, Raúl Castro suspended the delivery of new licenses to work independently in 32 types of businesses that generate products and services throughout the country. Temporarily or definitively, the general reduced the professions, from 201 to 169.

With its Venezuelan patron immersed in the worst crisis of its history, with less oil on the island, reduced subsidies, and with a new economic recession around the corner, the dictator far from giving greater economic freedom to Cubans, does the complete opposite. It shows that its slogan “without hurry but without pauses” aims to prevent the emergence of a thriving private sector, precisely the only engine that can take Cuba out of its prostration, backwardness and misery.

Why is this stampede occurring? Two seem to be the main reasons:

It is true that in China and in Vietnam that has not been so. But the few intellectuals who are now part of the Castro nomenklatura have an argument about it: it is one thing to live in the Far East, with its authoritarian and paternalistic Confucian tradition, not at all democratic, and it’s another thing is to live geographically in the midst of Western liberal democracy, 140 kilometers from the US, and with hundreds of thousands of “worm” residents traveling to the island every year.

Another factor that worries the Havana dinosaurs is that, according to the Havana Consulting Group, the island’s entrepreneurs already generate products and services for more than $ 2.5 billion annually, and run with 18% of the income indispensable for an economy that barely grew by 1% in the first half of 2017 and closed with a recession in 2016. For example, in Trinidad, state revenues in 2016 were exceeded by private revenues, which accounted for 57.9% of total revenues in that touristic town, according to economist Omar Everleny Perez.

And that happens when only 12% of the workforce employed on the island works in the private sector, a total of 567,982 people, according to Granma. Conclusion, Castro II and his claque do not want that capitalist embryo to grow. This reveals the anti-national and retrograde character of Castroism, contrary to the progress and welfare of Cuba and the Cubans.

For real changes to the island, a new political leadership is indispensable. Meanwhile, are there reforms in Cuba? None of that. Things are different there. A wide funnel for the Castro clan and “despacito” for the welfare of the people.

Increase of 575 political arrests in July

In July of 2017 there were 575 politically motivated detentions in Cuba, the highest figure since October 2016, according to a report by the Cuban Commission on Human Rights and National Reconciliation. Meanwhile, the Cuban Observatory of Human Rights (OCDH) denounced 3,118 “arbitrary detentions” on the island during the first seven months of 2017.

The government reinforced its strategy to avoid contingencies in the elections on October 22nd. The CDRs have been designated to hold meetings with their membership in the neighborhoods in August, and ensure that there are no surprise proposals from candidates who are not expected, in view of their “revolutionary condition.”

Platform Otro 18 already has 132 candidates for the elections

Opposition leader Manuel Cuesta Morua revealed that the Otro 18 platform already has 132 activists ready to stand as candidates for the upcoming People’s Power elections scheduled for October 2017. “As most of the citizens believe we need a new electoral law, he said Candidates submit proposals to their constituents.

Impeachment of misinformation in Cuba about Venezuela

The misinformation about what happens in Venezuela was denounced by Cuban activists who have had to appeal to means outside of Cuba to know what happened during the election of the illegal Constituent Assembly. Félix Llerena told Martí Noticias that in Cuba radio and TV use the “same speech of always in which, according to them, everything is calm and at peace” in Venezuela.

Freedom to travel, a right that many do not have in Cuba

Official Cuban media reported that 723,844 Cubans traveled to other countries in 2016, but remain silent about the Cuban residents who were banned from traveling despite having their documents in order, or those who were retained, arrested and held at police stations to lose their respective flights.

The independent newspaper 14ymedio of Havana revealed that the figures of emigration of Cubans made known by the government have been manipulated to cover up the mass exodus. The newspaper highlights that only in the fiscal year 2016 a total of 50,082 Cubans entered the US, and that the figures of the destination countries exceed those provided by the Castro regime.

European diplomats living in Havana visited opponents in Villa Clara and Camagüey, one month after the vigorous entry of the EU-Cuba Political Dialogue and Cooperation Agreement. Alongside this pact, the European Parliament adopted a resolution that establishes the need for the regime to respect human rights, otherwise the application of the agreement would be suspended.

The citizen platform # Otro18 pointed to the official newspaper Granma published errors on July 27 on the Cuban Electoral System, which provided regulations of the 1992 Electoral Law that were later repealed in July 2007 and which the authors of the article were evidently not Aware, or deliberately ignored it.

The Economist: Venezuela could be ‘something much worse’ than Cuba

An article published in The Economist believes that “instead of a second Cuba or a tropical China, chavista Venezuela, with its corruption, gangs and ineptitude, runs the risk of becoming something much worse.” In addition, the publication predicts that Venezuela’s economic collapse will be the most pronounced in Latin America’s modern history.

More than 1,300 Cubans in US detention centers

The newspaper El Nuevo Herald reported that as of July more than 1,300 Cubans are in the custody of US immigration police in detention centers across the country, more than twice as much as they had in March; suggesting that the majority tried to enter the US following the cancellation on January 12 of the policy of dry feet-wet feet.

“The police, the same to the opponents as to any citizen, is distributing blows just because they are the ones with the uniform,” said UNPACU activist Sonia González, who said that in the police unit of Zapata and C, In Havana, and already handcuffed, 10 police beat her with punches, kicks, and with tonfas they destroyed a knee.

The repression against the Ladies in White has intensified since the beginning of the Campaign Todos Marchamos, which denounces the existence of political prisoners in Cuba and demands their release. In a police operation on July 30 were arrested 65 activists of the group. “Our leader, Berta Soler, was pulled by her hair,” said activist Lourdes Esquivel

Suspension of Licensing for Private Businesses

In a new coup to the private sector, the regime suspended the issuance of new licenses for private restaurants and rental houses to tourists, and dozens of other private activities; And definitively canceled the delivery of licenses for wholesale sellers of agricultural products, street vendors, also known as “carretilleros”, and for other self-employment activities.

With the temporary suspension of the issuance of licenses in 27 categories of self-employment, and the disappearance of another 5, there remain only 169, compared with 178 authorized when the strengthening of this sector began in September 2010, and 201 that They existed since August of 2013. With this the dictator Raul Castro makes fun of the town once more.

Although the government says that the new measures against the private sector do not represent “a setback in the development of the activity,” housing renters in Havana expect a new wave of harassment of inspectors. “Now it will rain audits, threats to withdraw licenses … and requests for bribes,” said Orestes Michelena, lessor of the Río Cristal area.

‘There is no chance to progress here’, self-employed citizens complain

The cancellation of deliveries of licenses for private businesses has angered the entrepreneurs. Brian already had equipment to open an appliance repair shop in Centro Habana and has seen his aspirations fail “I had already gotten excited that I would soon start with my own workshop. This is outrageous, there is no chance to progress here”, he said.

CTC: wages in Cuba are insufficient to cover needs

CTC Secretary-General Ulises Guilarte de Nacimiento admitted that wages in Cuba are insufficient to cover the worker’s needs, leading to “apathy”, “disinterest” and “major labor migration.” Today you see nurses who work as “bicitaxis” driver and even a lawyer who becomes a living statue to receive tips.

A car in Cuba costs 2,270 average wages of a worker

A large group made up mainly of women residing in precarious shelters demonstrated in front of the headquarters of the Popular Power of La Habana Vieja to claim improvements to their housing conditions. These facilities do not meet the minimum sanitary conditions and are in bad condition, according to many complaints from those who end up in those places.

The Ministry of Public Health (MINSAP) launched a nationwide alert for an epidemic of hemorrhagic conjunctivitis. It is transmitted rapidly through direct or indirect contact with the exudate of infected eyes, through the hands and objects of personal use, droplets expelled from the airways and swimming pools, explained Dr. Francisco A. Durán.

While the Cuban economy is being transferred to the military, the employees of hotels and shops feel increasingly suffocated by the method of military management. They complain of abuses, mistreatment, arbitrariness, and non-payment of bonuses. “I decided to leave the Hotel where I worked when they began to steal my bonus money right in front of my face; I’m not a fool “, said the bartender Yulién.

Some 300 people who in 2009 illegally occupied Lawton’s former slaughterhouse in Havana face government neglect. There they have been living for almost 10 years. According to independent journalist Maikel Pardo, residents in the area “do not fully accept them” because of the increase in unhealthiness in the area and some episodes of violence.

The “libreta”, symbol of communist egalitarianism

Castro will end his term as president in February 2018, and nothing suggests that the supply (?) “libreta” will leave before he does. In 2011 the dictator announced its gradual elimination, because it is “an unbearable burden” for the state, “discourages work and generates illegalities.” But six years later, this symbol of communist egalitarianism and scarcity remains.

Raul Castro has spent 11 years at the helm of Cuba and economic changes since 2010 have meant nothing, economist Omar Everleny Perez said in Miami. He explained that the growth reported in the National Assembly is limited to tourism and sugar canes. Cuba needs new leaders, capital, and take care of the poor instead of pursuing entrepreneurs.

Canadian mother releases photos of the ‘nightmare’ hospital in Cuba

As soon as she arrived home in Canada, Nicole Antinello hung up photos of the pediatric “nightmare” of Holguín on the social network, with dirty floors, stinking water, filthy fans and debris in the yard. Her 7-year-old son Cole continues to have diarrhea and undergo tests at a Toronto hospital, where they believe the child was unnecessarily operated for appendicitis.