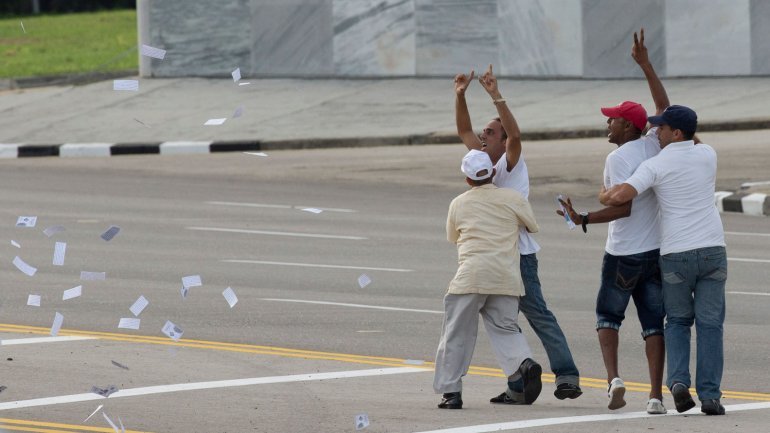 This call for help for the lives of three humble and peaceful Cubans is addressed to Pope Francis, to the governments of the free world, to organizations defending human rights and all people of good will.

On the morning of Sunday September 20th, within minutes from the start of the first Mass by Pope Francis in Cuba, three residents of Calabazar village in the Cuban capital, with Biblical names and members of a cell of the pro-democracy organization Patriotic Union of Cuba, UNPACU, named “Felix Varela” passed through Security rings without hurting anyone and approached the Bishop of Rome with the intention of calling attention to the things that make our country an inferno for the lives of most Cubans.

Zaqueo Baez Guerrero, Ismael Bonet Rene and the outstanding Lady in White Maria Josefa Acón Sardinas, wanted the Supreme Pontiff, the foreign press, and through this, the World, to know that in Cuba there are political prisoners who survive in subhuman conditions, that we live under a harsh dictatorship that tramples the rights and fundamental freedoms of human beings, and that the repressive forces beat Peaceful Women and men who just dream about a fraternal, fair, democratic and prosperous Cuba.

These three good Cubans, Zaqueo, Ismael and Maria, are on hunger strike as of Sunday September 20, and later also of thirst, in the infamous center for “investigations” at Aldabó and 100th Street in Havana. They are accused of assault, disrespect, public disorder and resistance. Their lives are in grave danger. With their strike they are sending a clear Message: they are not willing to serve prison time for an action to which they were compelled by the criminal methods of the Castro regime and the indifferent attitude towards the suffering of the victims of repression displayed by institutions and personalities that have a sacred duty to condemn abuses, all affront to human dignity, and always be “good Samaritans”.

In an open letter to His Holiness Pope Francis, dated September 3, we had already warned: “Many members of our organization and other groups of independent civil society wish to attend, with discipline and respect, to your masses, but the secret political police will prevent them as happened during the visit of your predecessor Benedict XVI. On behalf of those who could spend the days of your historic visit in dark dungeons, we also, since now, give you our warmest welcome.”

We had also written to the Cuban Bishops in order to inform them on the brutal beatings and even torture against peaceful human rights defenders. The same day of the arrival of the Successor of Peter to Havana, many dissidents were surrounded, and that same evening Berta Soler, Martha Beatriz Roque and Miriam Leyva were arrested. The three had been invited by the Church to be among those who would welcome the Argentinian Pope on his arrival in the Nunciature. All this was convincing Zaqueo, Maria and Ismael that there was no choice: They had to raise the cry of an enslaved people in that square.

Zacchaeus and his wife Mary received permanent surveillance since the day before, only the correctness of their intention, and perhaps their biblical names and that of the UNPACU cell they belong to (Felix Varela), could make it possible for them to avoid so many agents of the secret political police and get to Francis on that Sunday morning. Gallant Zaqueo rose to reach the representative of Christ, of whom he had heard was a fair man, concerned about the persecuted and oppressed of the earth.

Mary, like the mother of Jesus, suffered long ago the Stations of the Cross of her people, her sisters the Ladies in White and her own. Countless are the arbitrary arrests, beatings and other forms of cruel and inhumane treatment. Ishmael, like Abraham’s son, knows what it means to wander in the wilderness, be expelled, to live without rights, so he thought he should overcome the fear that paralyzes, (John Paul II told us: Do not be afraid), and that Sunday to do for his country what he had never done and we all should do. Ismael thought, God will hear me.

The preamble of the Universal Declaration of Human Rights reads: “Whereas it is essential that human rights should be protected by the rule of law, so that man is not compelled to have recourse to rebellion against tyranny and oppression.” In Cuba we have a regime that blatantly and cynically violates the civil and political rights, but also economic, social and cultural rights. The Castro regime’s abuses committed against the people are more than enough for Cubans to rebel against injustice. Cuban democrats are people of peace convinced that violence is never the best solution, so we persevere in our peaceful struggle in the midst of hatred and brutal repression.

Zaqueo, Maria e Ismael wanted (and succeeded in doing so, and all Cubans are indebted to them), to draw attention to our difficult reality. Complex reality that when healthy solution is not sought in time, ends fatally producing extreme situations like the one we see today in Syria. Situations that the Pope, and all people of good will, rightly condemn. Zaqueo, Maria and Ismael gave a prophetic cry, alerted everyone and told us with their action: It’s okay to rejoice with the process of normalization of relations between the US government and the Cuban regime, but do not forget the victims of violations of human rights, nor harbor any illusion that only that process will end the suffering of an oppressed people.

Zaqueo, Maria and Ismael were arrested before the Pope Francis and before several television cameras. The images were seen around the world. Now they have undergone 11 days on hunger strike and 6 without consuming water. Dozens of peaceful activists are now victims of repressive actions for claiming for their release. We fear for their lives. Therefore this SOS, is aimed at every person of good will.

Thank you so much.