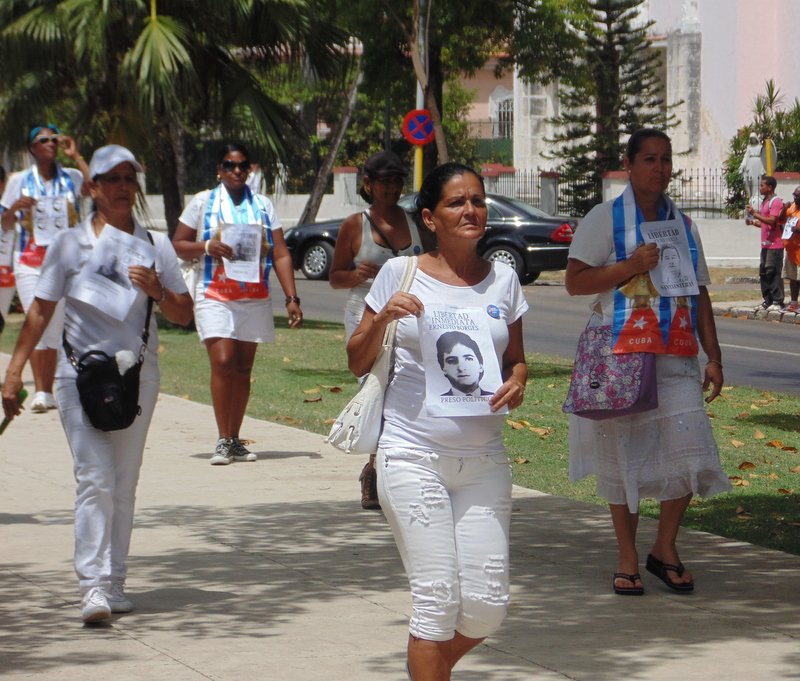 REPORT FOR THE MONTH OF AUGUST 2015

March 647 on Saturday August 1 began with the besieging of the homes of Ladies in White members, 6 were arrested before mass at Santa Rita Church of Cascia Miramar Beach, 52 attended mass, then completed the march down 5th Avenue. After a broad meeting at Gandhi Park, Ladies in White and human rights activists from different organizations walked with pictures of political prisoners to claim their freedom. We were arrested, violently, we were insulted, assaulted, e / 26 and 28, by paramilitary, uniformed police, the Special Branch of the National Revolutionary Police (PNR) and rapid response brigade of the Communist Party, operations directed by the Department of State Security (DSE), and were transported by bus to the police school located in Tarara, former pioneer camp, which is today a torture center for Ladies in White. Gladis Capote in being taken to Tarara, handcuffed, and due to the lack of oxygen in the bus, raised her blood pressure. Once locked in classrooms, food is prohibited, we are denied water, we are beaten, to provoke the Ladies in White, they laugh derisively. This Sunday we are threatened by a warning letter and that we will be taken to prison. 39 Ladies in White were seized during the 16th Sunday of the #todosmarchamos (we all march) campaign and detained for wanting to exercise our rights.