NPC to Kerry: Freedom of Press and “Connecting Cuba” Should Be Cornerstones 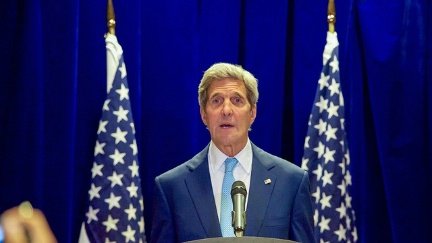 WASHINGTON, Aug. 12, 2015 /PRNewswire-USNewswire/ — The National Press Club on Wednesday called on Secretary of State John Kerry to make press freedom and the expansion of Internet access in Cuba a priority in his department’s engagements with the Castro regime.

The secretary will become the highest-ranking U.S. official in decades to visit Cuba when he travels to the Caribbean nation on Friday, Aug. 14 to take part in the ceremonial re-opening of the U.S. embassy in Havana. The United States and Cuba resumed diplomatic relations earlier this summer and President Barack Obama is urging Congress to lift the half-century old trade embargo on the country.

“Encouraging freedom of the press and freedom of information should be cornerstones of the U.S. government’s reengagement policy with Cuba,” said NPC President John Hughes. “It’s hard to imagine human rights, labor conditions, and corruption in the country getting any better absent the public accounting that comes with a reasonably free press. Therefore, the United States should use all tools at its disposal, including diplomatic and economic, to support unrestricted reporting and the dissemination of information in Cuba.”

This year, the New York-based Committee to Protect Journalists ranked Cuba the 10th most censored country in the world and the worst country in the Americas for press freedom. Only a small percentage of the population has access to the Internet and some content is blocked. The small number of Web-based independent journalists working in the island country face harassment, surveillance and short-term imprisonment, according to the press rights group.

Print and broadcast outlets in Cuba are entirely under the control of the Communist government, according to CPJ. Local law requires that reporting must be “in accordance with the goals of the socialist society.”

To help advocate for greater, open internet access and the ability to communicate freely in Cuba, the FHRC has launched the Connect Cuba campaign. For more info, or to get involved, please click here.

Established in 1908, the National Press Club is the world’s leading professional organization for journalists. Through its Freedom of the Press Committee, NPC advocates for journalists under siege abroad and at home.