No More “Droplets of Internet” for the Cuban People: Let’s Tear Down the Cyber Wall An article on June 30th from El Nuevo Herald as well as the follow-up in Newsweek on July 13th highlights recent Cuban government meetings with several Google executives on the possibilities of bringing massive Internet to Cuba. Brett Pelmutter, a top Google Ideas exec, reportedly presented a plan to provide internet to Cuba via Wi-Fi connections directly to mobile devices. It is a similar strategy implemented by the tech giants Google and Facebook in emerging African nations. The concept of jumping to mobile infrastructure  has been touted to be more cost effective to implement than hard wiring an entire nation or going through outdated ADSL technology, as was for Cuban homes in the not too distant future, but then quickly denied by ETECSA officials, Cuba’s state owned telecom monopoly. oogle and Facebook both share a global mission to close the digital divide and connect the world. This would benefit the Cuban people tremendously by allowing cost effective, and more readily accessible internet. Currently, as stated in Newsweek, “only 5 percent of Cubans have regular access to the Internet, one of the lowest rates in the world, according to Freedom House, an independent watchdog organization. About 25 percent of the population has access to the country’s intranet, which hosts mostly pro-government websites.”

The prospect of open, uncensored access to the world wide web, or as local Cubans refer to it “la red de redes (the network of networks),” apparently has top Cuban government officials rattled. Alana Tumino, director of of the work group on Cuba in Americas Society and Council of the Americas (AS-COA), believes “there is still skepticism among Cuban officials about the reasons for US companies to enter the market. There is a huge opportunity, but it will take time to turn it into a real project in the field.” 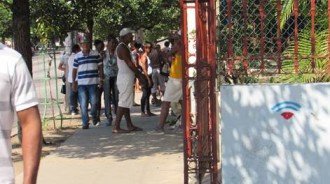 This skepticism is reinforced by Newsweek, “José Ramón Machado Ventura, the second-highest ranking member of the Communist Party of Cuba, behind President Raúl Castro, said in an interview with the daily newspaper Juventud Rebelde that ‘the whole world knows that there is no Internet in Cuba because it has a high cost….There are some people who want to give it to us for free, but not for Cuban people to communicate but to penetrate us and do ideological work for a new conquest.’ The paper is published by the Cuban Young Communist League.” Unfortunately, these fears do little more than hurt the majority of Cuban people who are desperate to connect with each other and the world outside.

The Cuban populace demands more internet connectivity now, while these “digital divide” talks seam infinitely ongoing. On top of it, a police operation on July 4th that shut down a private Wi-Fi hotspot illustrates the Cuban governments intentions of allowing internet accessibility only on their own terms. The Policía Nacional Revolucionaria, Cuba’s political police, arrested a young network administrator, Famada Hernandez, and seized his equipment, including a personal computer used as a server and a home-built Wi-Fi antenna. Similar raids have been ongoing by Cuban police in various neighborhoods as many network administrators get punished for creating local mesh networks with fellow Cubans, desperate to share bits information and content that is readily available to family and friends living in more open societies. Meanwhile, the only minor opening the Cuban government has allowed recently, has been the opening of 35 “Wi-Fi hotspots” in Cuba via ETECSA. That is 35 new hotspots in a country with a population of about 11 million, at the equivalent of $2 USD per hour, or about 10% of the average Cuban’s monthly salary. This network, about 3 to 4 times slower than comparable US hotspots,  can only be accessed via a government run  “Nauta” email account. The Cuban government is releasing small “droplets” of relatively slow Wi-Fi to a small fragment of the Cuban population…and that is not enough. The time has come, and the Cuban people are calling out, to #ConnectCuba for ALL Cubans, utilizing the latest technologies and at a price they can afford. Let’s tear down Cuba’s cyber wall once and for all.

If you would like to help the Cuban people with the tools and resources to be more connected today, please click here. 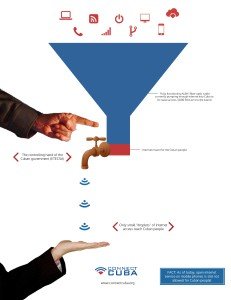