Cuba’s Internet: Flying a Kite on a String 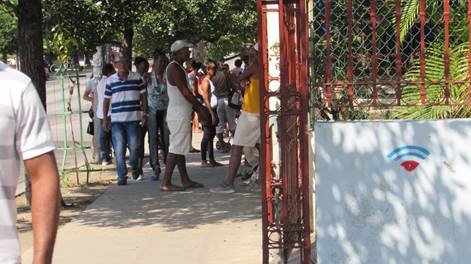 The Cuban government owned telecommunications provider Empresa de Telecomunicaciones de Cuba S.A. (ETECSA) apparently released an inequitable Internet plan for the Cuban populace. “The plan”, revealed on the website La Chiringa de Cuba on June 24th, states ETECSA will provide asymmetric digital subscriber line (ADSL) Internet to Cuban households at the same service price as commercial enterprises receive.  This price was to range from 10 Cuban convertible pesos (1 CUC is appoximately equal to $1 USD) a month for 20 hours of service, up to a maximum of 60 CUC a month for 220 hours of service. This new offering seemed like a small step towards a more open Internet in Cuba; but a further analysis of the numbers reveals the opposite is true.

ADSL service is an antiquated telecommunications technology by Western standards. As a reminder, the ALBA-1 fiber optic cable was installed in Cuba in 2011 and was expected to increase Internet speeds on the island by 3000-fold. It has been fully functional since at least January of 2013. Since then, all indications have been that this high-speed Internet connection has been put to extremely limited use, apparently benefitting only select government offices (state security, cyber militia, “official” blog sites, etc.), and not meant for the general populace. ADSL technology supposedly proposed for the general population is telephone line based.  ADSL is not to be confused with dial-up Internet as the user can use the telephone and access the Internet simultaneously.  This form of Internet connection via antiquated telephone lines limits the overall speed of access to the Internet.  The download and upload rate of ADSL is around 8Mbps and 1Mbps, respectively.  This means the download speed of the Internet in Cuba is 78% slower than the average wired connection in the United States and the upload speed of the Internet is 92% slower. A slower Internet connection makes access to the Internet for an average Cuban household inefficient, to say the least, as the stated plan by ETECSA restricting the amount of hours a household may have per month.

In addition, the “proposed” ADSL line provided by ETECSA is unfairly priced for the average Cuban household due to ETECSA’s monopoly on telecommunications, and the fact that the average Cuban citizen earns approximately 20 CUC a month.  This means that the average Cuban would have to spend 50% of their monthly paychecks in order to access the Internet via a relatively antiquated system at home, while the average American household allocates approximately 1% of their monthly income to Internet service charges.  The ludicrous pricing, combined with only an estimated 3.4% household Internet penetration, means Internet access in Cuba will remain closed to the vast majority of the population.

Sadly, even this obsolete Internet plan for the Cuban people has been abruptly denied. ETECSA issued a statement backtracking on their proposed domicile ADSL Internet service on June 25th. ETECSA declared that the original plan was obtained from an “unauthorized source” based on a document used to teach technical specialists of the company on possible market scenarios.  The statement further elaborates the plans are not based on any real implementation plans and the Internet rates stated were inaccurate.  Instead, the ETECSA will implement a constrained plan to introduce 35 public Wi-Fi hotspots throughout the country.  The Internet access will cost 2 CUC an hour (about 10% of the average Cuban’s monthly income) and each spot is limited to a maximum of 100 users at a download speed of 1Mbps. This means a maximum of 3,500 out of a total population of 11,000,000 people on the island can use these Wi-Fi hotspots at any given time, at a speed that isapproximately 86% slower than the average American Wi-Fi connection.

These developments necessitate Cubans to look for other means to access the Internet.  Recent visits to the island from various Google executives offered hope for a more comprehensive Internet plan for the Cuban people. After their most recent visit, a Google representative suggested Cubans would benefit from skipping a generation of technology by increasing the proliferation of mobile telecommunications technology; a similar model present in developing African nations. This is a much more efficient model as wiring the majority of Cuban households will take immense time and capital to accomplish.  Mobile phone access to the Internet would require less investment in infrastructure and would allow Cubans to access the Internet in a much more economical manner than ETECSA’s rate plan.

Until then, Cuba’s Internet situation will continue flapping haphazardly in the wind, with no real direction, especially if it remains solely in the hands of state owned outfits like ETECSA.

To learn what you can do to help “Connect Cuba” today, please click here.