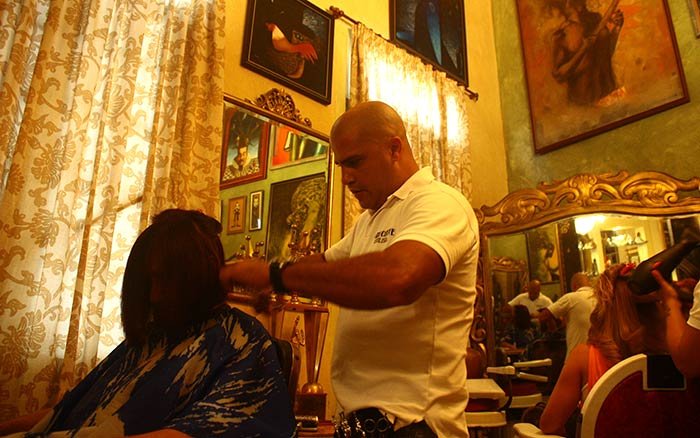 As published in El Nuevo Herald, “unsatisfied with being a successful private businessman in Cuba, Gilberto Valladares dabbled in what the capitalist countries call ‘corporate social responsibility’ and has changed the face of a grim neighborhood of Old Havana.”

The article goes on to say that “Papito” Valladares, as he is popularly known, “left his job hairdressing at a state run institution to become a private worker or ‘self-employed,’ a model that has flourished on the island…”

The Herald declares that Valladares “now has one of the most famous beauty salons in Havana, but as other self-employed workers’ earnings are destined to grow the business or give a better life to family, Papito spends part of his earnings to procure the well being of other less fortunate members of his community.”

“I always say that the historic moment of engaging entrepreneurs with society is now,”  said Valladares from the hairdressing school that he opened this year.

Papito goes on to state that “in this school there are [currently] a half dozen students. There were 15 at the beginning, but the academic demands and the need to earn a living has caused defections.”

The Herald piece mentions that although tuition is free, much like the rest of the educational system in socialist Cuba, funding for Papito’s school does not come from the coffers of the state but from the pockets of a 45 year old barber.

One of Papito’s students, Lilian Nargoyes, 18, mentioned that she “learned from a neighbor that Papito had a hairdressing school” and she joined. She adds that “This marked a change in my life” and “hopes to someday open a salon in her home.”