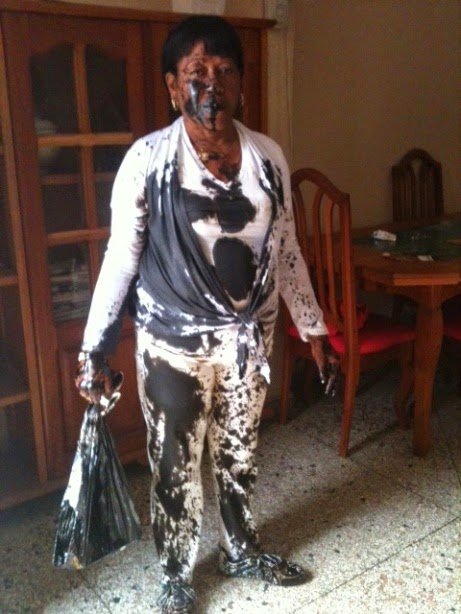 We can not fail to overlook the magnitude of the last act of vandalism ordered and directed by member agents of the Department of State Security against the Lady in White Digna Rodríguez Ibáñez from the delegation of Santa Clara.

Rodríguez Ibáñez, who was recently incorporated to the movement has been the target of several acts of vandalism, on two occasions and in the early morning hours, paramilitary mobs hurled asphalt and feces onto the front entrance of the home of the Lady in White.

Asphalt is a viscous, sticky and black colored material used as a binder in asphalt mixtures for the construction of roads, highways or freeways. It is also used in waterproofing. It is present in crude oil and composed almost entirely of bitumen.

These cruel acts began after she joined the ranks of the feminist movement, fighting for the freedom of political prisoners, in late January.

On Sunday February 22nd at 8 am when Digna Rodriguez Ibanez left home, to go to the Santa Clara de Así church, dressed in white to participate in a Mass, she was assaulted by a man unknown to her, who without word emptied a bucket of asphalt on the face of the Lady in White.

This forms part of the typical perverse methods of totalitarian dictatorships. The Rapid Response Brigades continue to make these types of attacks on human rights activists, throwing asphalt, rocks, excrement, toxic substances, objects, against their homes.

The address of Rodriguez, is located on Amparo street number 473 between Rodrigo and Estrada Palma, Santa Clara, Villa Clara, and she can be reached via her mobile phone 58.189.645.

Berta Soler Fernández.
Leader of the Ladies in White Laura Pollan Movement
*Attached to the document an image taken just after the attack. 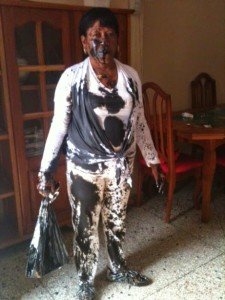