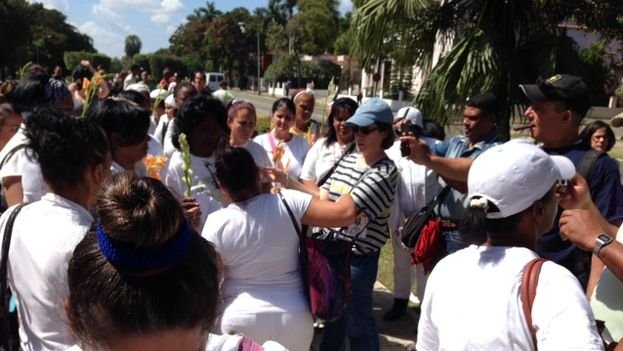 As reported in Translating Cuba and 14ymedio, “during a press conference Sunday afternoon, Berta Soler, leader of the Ladies in White, announced that a recall referendum would be held within the organization to define her continuity at the head of this Human Rights movement.”

“Surrounded fifty Ladies in White, Soler read a statement to several foreign correspondents and independent media gathered near the Church of Santa Rita, in the Havana neighborhood of Miramar.”

According to Soler, “she will submit her leadership at the head of the organization to a recall referendum. The date of the consultation will be this coming March 16, but she did not detail how the procedure would be carried out.”

In her statement, the human rights activist “also invited the Ladies in White living in Miami who signed a letter last week asking for her resignation to ‘return to Cuba to fight.’”

Soler explained that “today’s march was dedicated to Orlando Zapata Tamayo,” an activist who died in February 2010 after a prolonged hunger strike as well as victims of the Brothers to the Rescue humanitarian flights who were shot down by Cuban military planes. The leader of the Ladies in White also said that once the press conference ended, the women would continue their pilgrimage beyond Avenida Quintera towards the neighborhood of Vedado.

14ymedio was able to confirm that “minutes after crossing the Calle Linea tunnel, an act of repudiation was carried out against the Ladies in White who, for fifteen minutes, were surrounded by people carrying posters with official slogans and screaming out against them. The women were then forced into several buses waiting near the site and driven off to a unknown destination.”