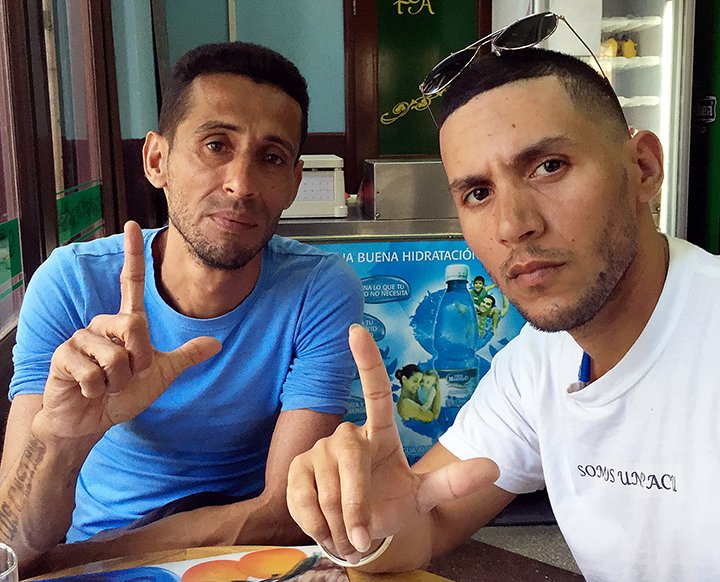 The Cuban rapper Ángel Yunier Remón Arzuaga, known as ‘El Crítico’ is the only musician who “formed part of the list of 53 political prisoners released at the request of the United States,” according to the interview published today in El Nuevo Herald.

Below are some excerpts from the full interview:

“After a journey of nearly 12 hours from their homeland in Bayamo – city in eastern Cuba where the national anthem was born with a cry to fight against Spain – the rapper known as “El Crítico” and dissident activist Alexander Otero celebrated their freedom in a bar in Old Havana. Only two weeks after being released in the war of words against the Castro government, they are ready for a new battle. “

“As part of the hip-hop group Los Hijos Que Nadie Quiso or ‘The Children That Nobody Wanted’, Remón’s songs strike against the ruling regime’s propaganda like a machete in the field, hard and unforgiving.”

“His ‘freedom’ itself has conditions. Anything Remón, 31, says that the government considers outside the revolutionary rules will have consequences, but he is already planning to bring his music of discontent to Havana.”

Besides, “El Crítico is not an isolated case” but instead represents “a growing trend to politicize art and culture in Cuba.”

“The artist Tania Bruguera is still being held in Cuba, since December, after attempting an open mic performance in the Plaza of the Revolution.”

Other “rebellious rappers,” such as “Maikel Oksobo (El Dkano), was recently sentenced to prison for ‘pre-criminal dangerousness.”’

In addition, “currently imprisoned are graffiti artist Danilo Maldonado and writer Ángel Santiesteban, author of “Cuentos de la prisión Los hijos que nadie quiso” or “Tales From Prison: The Sons No One Wanted”, for which Remón was inspired to head up the rap duo that he created along with Yudier Blanco Pacheco.”

“Musicians, writers, filmmakers and Cuban artists try harder to move the political ‘floor’ of the island although the consequences are serious.”