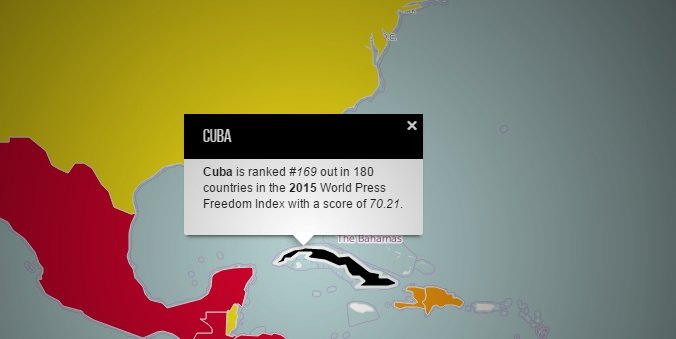 Reporters without Borders, the international nonprofit organization whose mission includes “to continuously monitor attacks on freedom of information worldwide,” has just released its annual World Press Freedom Index for 2015. According to the latest report, Cuba once again ranks near the very bottom at #169 out of 180 countries measured on the Index.

Reporters without Borders summarizes the totalitarian island nation by stating that “freedom of information is extremely limited in Cuba, which is ranked lower in the index than any other country in the Americas. The government tolerates no independent press. Internet access is restricted and tightly controlled. The authorities continue to cite the US embargo as the reason for the low Internet penetration but the activation of Cuba’s ALBA-1 fibre-optic cable with Venezuela proves that it has more to do with a political desire to control the Internet. In addition to the lack of media pluralism, outspoken journalists and bloggers are still subjected to threats, smears, arrest and arbitrary detention.”

The summary concludes with an open ended question, “Does the announcement by Cuba and the United States of an historic agreement to restore diplomatic relations offer a ray of hope for Cuban journalists?”